It is often said that sport has no place in fiction. Why would you script a drama based on the events sport consistently produces? The reality is far more entertaining. A good documentary is a testament to this and there are some great sports documentaries on Netflix right now.

In many ways, a good sports documentary is similar to a good film. Narrative, authenticity and compelling storylines are crucial. Netflix is home to some brilliant series and the same is true for the genre of sport.

'Last Chance U' persists as the beat-for-beat perfect depiction of the brutality and hardship required to make a living playing American Football. The latest installation tilts away from the familiar setting of Scooba, Mississippi to another junior college in Independence, Kansas.

This sports documentary isn't just one episode but five seasons and thus will require a lengthy commitment, but it is worth it.

A must-have on any Netflix watch-list, and not just for sports documentaries.

The Academy Award-winning movie begins with documentary maker Bryan Fogel's experimental doping regime and suddenly finds itself in a global doping scandal. An eye-opener for sports fans and compelling for film fans.

The Battered Bastards of Baseball

A 2014 documentary film about the Portland Mavericks, a defunct minor league baseball team in Portland, Oregon. A riveting anti-establishment, underdog rages against the machine story that is a comfortable one hour and twenty-minute watch.

An underappreciated sports documentary on Netflix.

The life of Dave Schultz, a professional wrestler who was part of 'Team Foxcatcher.'

An engrossing story of murder and the fall-out that at times feels like a blockbuster thriller rather than a sports documentary on Netflix.

Wether you're an ardent F1 fan or you've drifted away from the sport in recent years, Formula 1: Drive to Survive will have you hooked. There are three seasons of the show to date, covering the 2018 and 2019 Formula seasons, and it's a brilliant fly-on-the-wall insight to the most interesting storylines across the racing field.

While the likes of Lewis Hamilton etc might have grabbed the headlines each race weekend, Formula 1: Drive to Survive opens our eyes to the brilliant stories further back the paddock that we may not have been paying attention to.

You'd need to have been living under a rock to not have heard of The Last Dance  but believe us, it's worth the hype. The documentary tells the story of Michael Jordan and the incredible Chicago Bulls team that dominated the NBA in the 1990s.

The behind the scenes footage of the 1998 season forms the basis of each episode but the majority of each episode is taken up by the stories of Jordan and the Bulls' rise to dominance and their fight to stay at the top.

Telling the story of arguably the greatest footballer of all-time, Pelé gives you a fantastic insight into the Brazilian superstar.

Starting with his childhood, before moving the then 17-year old announcing his presence on the world stage at the 1958 World Cup, and slowly making its way through what was a stunning, if often controversial, career.

The documentary gives you an insight into one of the more interesting characters the world of sport has ever seen.

Sunderland Till I Die

We here at Balls are huge fans of Sunderland Till I Die, with the first season of the show providing absolutely everything you want in a sporting documentary. Drama, comedy, barely believable personalities, this one has it all.

It follows Sunderland's first season in the Championship after their relegation from the Premier League. While those at the club thought the cameras would capture a glorious return to the English top flight, they did quite the opposite. They would suffer another relegation, with no shortage of entertainment along the way.

The second season was just as entertaining, with arguably even more entertaining characters at the centre. You'd have to see some of the stuff that went on to even believe it.

Killer Inside: The Mind of Aaron Hernandez

The sporting world was rocked back in 2012 when NFL star Aaron Hernandez was arrested on suspicion of a double homicide. While the New England Patriots was a controversial character, he was also one of the most dominant young players in the league.

A multi part documentary, Killer Inside: The Mind of Aaron Hernandez tells the tale of how Hernandez went from troubled youth, to college and NFL football star, before eventually ending up in prison as a convicted killer.

It is an incredible watch.

Sporting documentaries are often filled with tales of glory, but rarely do we get an in-depth look at those who fall on the wrong side of history.

Losers tells the stories of those who failed on the biggest stage, and how they coped with those setbacks. Each of the eight episodes deals with different stories and sports, with football, boxing, golf, figure skating, dog sledding, and others all getting a look in.

Untold: Malice at the Palace

'The Malice at the Palace' was one of the most infamous events in NBA history, with a brawl breaking out during a game between the Detroit Pistons and Indiana Pacers back in 2004. It featured players from both sides, with members of the Pacers even jumping into the crowd to confront some of the Detroit fans in the stands.

This documentary gives the inside story of what exactly happened on that night, as well as the far reaching reaching consequences for those involved.

SEE ALSO: 18 Of The Best Movies On Netflix Right Now 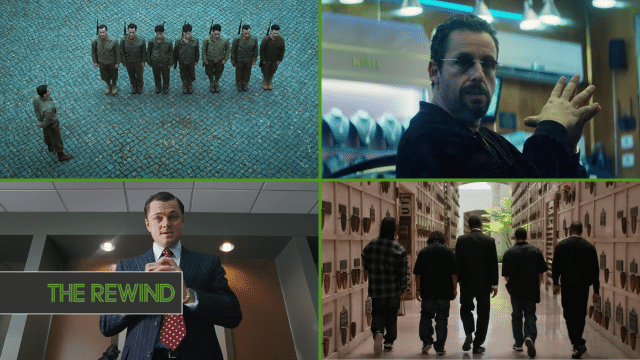 The Rewind
6 days ago
By Gary Connaughton
People Were Absolutely Astounded After Last Night's Derry Girls Finale
The Rewind
1 week ago
By Luke Delaney
How To Watch Conversation With Friends In Ireland
The Rewind
1 week ago
By Eoin Harrington
Watch: Brilliant Dermot Morgan Dublin Segment From 'The Travel Show' Resurfaces
Popular on Balls
Motorsport
1 day ago
By Eoin Harrington
F1: New Team Radio Clips Show Sergio Perez Frustration With Team Orders In Barcelona
GAA
3 days ago
By PJ Browne
Controversy In All-Ireland U20 Hurling Final Over Dubious Crucial Point
GAA
3 days ago
By PJ Browne
Mullane Says Cahill Won't Like Waterford Dressing Room Leaks
Football
3 days ago
By PJ Browne
McGeady Story Shows How Much Strachan 'Didn't Like Him' At Celtic