Dana White Pans Boxing, Outlines What He Wants McGregor/Aldo To Be 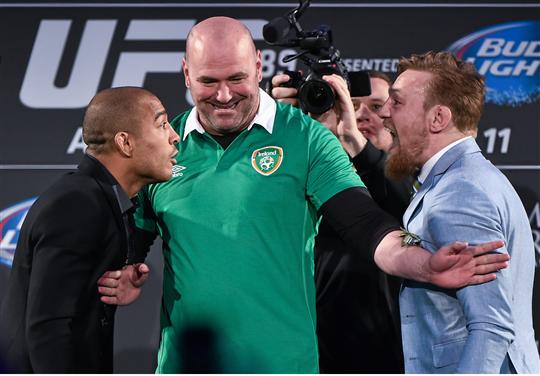 Dana White took a serious swipe at boxing and at the Floyd Mayweather/Manny Pacquiao fight in particular yesterday as he outlined his vision for what he hopes the July 11th bout between Conor McGregor and Jose Aldo will do for the UFC.

White had eight tickets to the Mayweather/Pacquaio super-fight in Las Vegas last month but like the vast majority that sat through the snore-fest - he came away disappointed:

"A typical boxing event where you rip all the money out of it, not only did they not have any value in the production during the show, the fight sucked. It's typical boxing. It's what they always do. They're never worried about the future of the sport."

White also said that UFC 189 featuring McGregor/Aldo will need over 1 million PPV buys just to break even with the amount of money that has been spent on the fight through marketing and advertising. He evidently feels this is a worthy investment and the complete opposite to what we witnessed in the boxing world last month:

White also revealed that 25% of ticket sales for UFC 189 have come from Ireland and the United Kingdom.

The takeover is on.

Article written by
Paul Ring
See more from Paul Ring
Popular on Balls
Football
14 hours ago
By Gary Connaughton
McCarthy Stresses Form, But Will He Practice What He Preaches In Irish Midfield?
10

Rugby
15 hours ago
By Gary Connaughton
Watch: O'Driscoll And Dallaglio Speak Nothing But Sense On Saracens Mess