Rugby Play Of The Weekend As Voted By You

After Tadhg Furlong's shocking - but in another sense, not shocking at all - victory in last week's Vodafone Rugby play of the week poll, we're back for the final poll of the November series.

Furlong's barreling run against New Zealand was the only 'Irish play' in last week's poll, a factor which may have been decisive in it securing an unprecedented 74% of the overall vote, trouncing Tevita Kuridrani's wonder try against France in second place.

This week, we've a much more Irish heavy selection following the 27-24 win over Australia. And thus, we've been treated to a somewhat tighter contest.

Although nor do we require a recount. We're not looking at a Florida 2000 situation here. 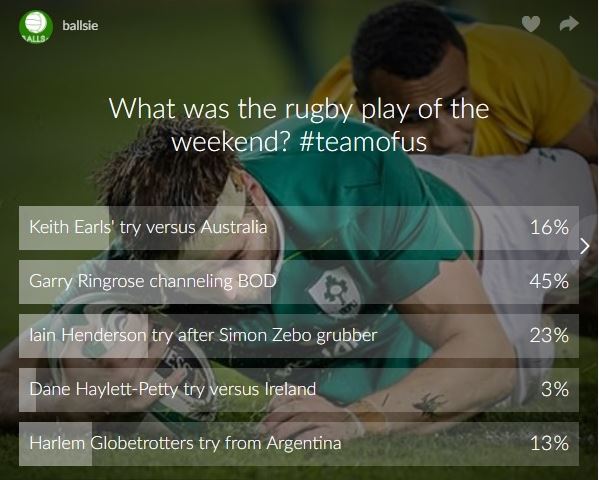 The Irish public were not enthused by Dane Haylett Petty's offload heavy try against Ireland just on the stroke of half-time. It secured a miserable 3% of the vote. It would appear there is a little desire to watch this one back.

A GOLDEN SHOT! Brilliant execution from Dane Haylett-Petty. SS2. Brought to you by @DoveMen. #ScrumTogether https://t.co/sKd564bw8Z

4. Harlem Globetrotters try from Argentina
Argentina's entertaining team try against an England team who admittedly were down to 13 men came in 4th with 13% of the vote.

The Argentinians didn't cover themselves in glory in Twickenham last Saturday, only scoring points either side of half-time when the hosts were two men down.

For the rest of the game, when the hosts were only one man down, they shipped 27 points and scored nothing. Quite pathetic.

It's an Irish 1, 2, 3 at the top of this week's poll. Just when the tide seemed to have turned decisively an injury ravaged Ireland, they had enough enterprise to manufacture a winning try halfway through the second half. Keith Earls touched down in the corner. Took in 16% of the vote.

The office favourite was Iain Henderson going over for Ireland's first try last Saturday after Simon Zebo had slipped a grubber kick through the Australian defence. Delightful score. He hits 23%.

But the winner by a distance was Garry Ringrose stooping to collect a loose pass and burrowing through a massive hole at the heart of the Australian defence.

The public were often excited by the sight of a young and promising player coming of age. The Ringrose try took home a neat 45% of the vote, just under the overall majority threshold.