John Delaney Under Fire For Alan Kelly Support - But Could He Have Run Himself?

John Delaney attracted the ire of Mattie McGrath (who may yet prove to be his most formidable foe) after being pictured pounding the streets of Clonmel and Nenagh on behalf of Mattie's North Tipp rival, Labour's Alan Kelly, last Friday.

The Sunday Times spoke to a source who confirmed that Delaney is a supporter of Kelly and said he hoped he would be re-elected at a recent function.

In his autumn 2015 leaflet trumpeting his efforts on behalf of the people of Tipperary Town, Kelly included this picture from his 40th birthday party. 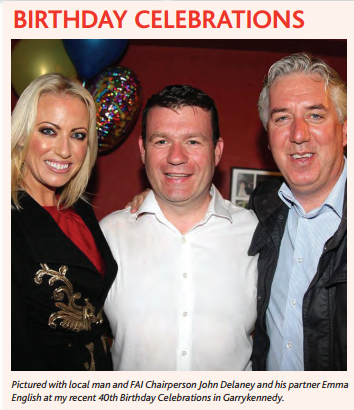 Delaney's origins are a bit confusing to some. He was born in Waterford - where his father was Chairman of Waterford United - and grew up in Tipperary. Oddly enough, he is a massive supporter of the Kilkenny hurlers. Delaney's legendary capacity for raucous celebrating revealed itself once more in the aftermath of Kilkenny's latest All-Ireland title in September.

McGrath has taken Delaney's support for Kelly as a personal affront and defiantly tweeted a picture of his own team before a canvas in Tipp Town. Quite why he is so sensitive is strange, considering that he is topping every poll and Kelly - like all Labour TDs - is clearly in a scrap for the final seat.

Alan Kelly may have had John Delaney canvassing with him but this was my team in Tipp Town and I'd have them anyday! pic.twitter.com/YIjbCb5rw0

Mattie described Delaney's very public support for Kelly as 'highly unusual and inappropriate' given his prominent position within a publicly funded organisation. He said he was surprised that Delaney would allow himself to be used in that way.'

Government TD's Pascal Donohue and Joan Burton have essentially told Mattie to pipe down. The former said that what people do in their 'own personal time is their own business'.

So, does this mean John is a Labour man?

It could have all been very different.

As Delaney told Barry Egan in 'John the Baptist', a documentary described by some critics as the greatest film since 'United Passions', he could have been Soldier of Destiny.

Mine? (politics). None really honestly. Because I work with all different parties for the good of football... I was asked by a Fianna Fail minister in Croke Park would I run in either South Tipperary or Waterford and in one tenth of a second I said 'No'. It would have been in 2007, 2008...  And he meant it now, it wasn't a throwaway...

Kelly, for his part, appears to have a particular flair for securing the support of sports figures.

After Tipperary's victory over Cork in the first round of the 2009 Munster Championship, Liam Sheedy finished his post-match interview by expressing his support for Alan Kelly's candidature in the following week's European election.

Read more: Shane Long's Move To Liverpool Has Taken A Step Forward According To English Reports