Announcing The Nominees For 2015 Balls.ie Man Of The Year

We hereby announce the nominees for the 2015 Balls Man of the Year.

Our panel of experts have argued long and loud about the merits of those on the longlist and have now whittled those names down to a shortlist of six. From here on, democracy reigns. It is up to you. Cast your vote at the bottom of the post.

Who will follow in the glorious footsteps of Eamon Keegan, Shane Curran and Ger Brennan?

You can read about the mission and ethos of the Balls Man of the Year awards here.

The interview is principally remembered now for Glynn's use of the word 'bullshit'. But this is only one element of what was a glorious contribution to Irish television.

For a start, he demonstrated a true Irishman's humility in his description of the goal.

The way Glynn described it, he was merely a bit part player in the whole thing. A gormless beneficiary of both outrageous fortune and the hard running of his teammates.

The Chauncey Gardner of hurling wondergoals.

To the casual observer, it looked like the hard work had been done by Glynn himself when he slalomed through the Cork defence, lifted it over Mark Ellis and swiped the ball home from close range.

But according to Glynn, the hard work had in fact been 'done by the boys running off', a verdict which should surely see him crowned as the patron saint of decoy runners.

But that wasn't all. Rarely has a three minute post-match interview provided so many moments to delight. The manner in which he described his own contemporaneous thought processes was especially novel.

When I started running I suppose I didn't shtop and when I got the chance of the goal I said I'd shtay goin'...

He deserved high marks alone for returning the words 'poxy' and 'clobbered' to the world of the post-match interview, serving to highlight their shameful under-use in that context in recent years.

While the curse grabbed all the headlines, it was his apology which sticks in our heads. One of the most endearing television moments of 2015.

Not since Brian Lenihan Sr. in the 1990 Presidential election has the nation been so transfixed by a man staring straight into the camera. 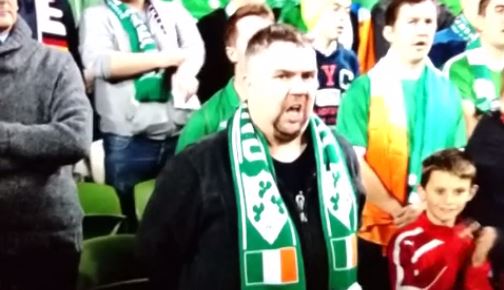 Spectators have a proud tradition of achievement in the Balls Man of the Year awards. Indeed, the inaugural winner of the award back in 2012 was Sallins man Eamon Keegan.

As the crowd belted out Amhrain na bhFiann, blissfully unaware that they were about to witness a historic night, the camera zoomed in one man who was belting out the anthem with greater solemnity and ferocity than anyone else in his vicinity.

Swept up in the moment, he gave the passing lens a hearty salute.

Opinion was initially divided as to whether this man could be classified as a 'legend' or as something more derogatory. In our snap poll, the verdict came back loud and clear.

The man was a legend.

In the afterglow of a famous victory, his salute took on a new significance. It's impossible to witness it now and not feel that the salute set the scene for what was to come.

NOTE: Regrettably, if you type the phrase 'salute germany game' into google, this man's performance isn't the first result that appears. 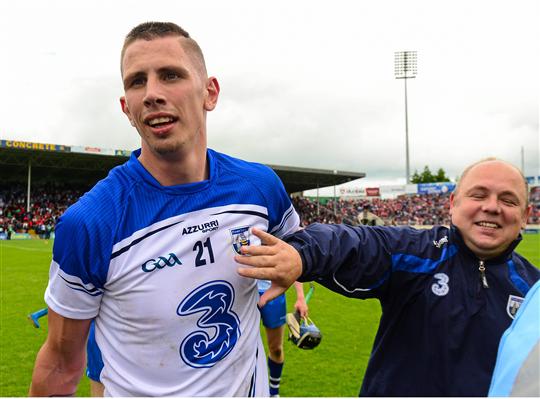 For a comeback which puts all other comebacks into perspective.

After a harrowing 2014 in which he suffered with depression and attempted to take his own life, Shanahan emerged from the darkness to lead Waterford to an All-Ireland semi-final and win an All-Star in 2015. An inspirational tale.

His brother Dan - the 2007 hurler of the year - functioned as a virtual bodyguard during those dark days. With tears in his eyes, Dan locked him into the shed at home and laid out the consequences of what Maurice was trying to do. 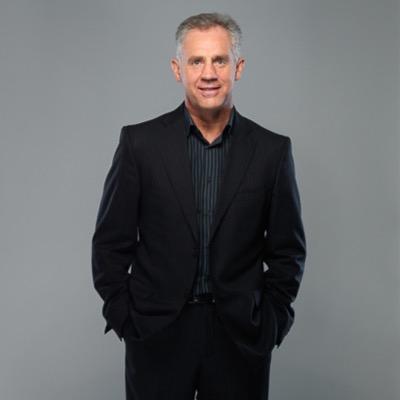 Before the TV3 curse was ever heard from, Irish football fans used to live in fear of the Jimmy Magee curse. When George Hamilton was in his rightful perch in the commentary box, his microphone pressed up against his philtrum, Ireland would go game after game without losing.

This would continue until the powers that be decided that the grandeur of the occasion called for the experience of the memory man, whereupon the whole thing would come crashing down around our ears. This, essentially, is what happened at Italia 90. Jimmy Magee called the action that night in the Stadio Olimpico as Ireland's magical summer came to an end.

But for every Jimmy Magee curse or TV3 curse, there is a good luck charm, a man whose presence in the commentary booth serves to reassure viewers that we are in for a good night.

Jim Beglin made a welcome return to the RTE commentary booth in the closing stages of Euro 2016 qualifying. Just hearing his voice took many back to the relative glory days of the late Mick McCarthy era.

Ireland immediately recorded one of our most famous victories. The 1-0 win over Germany was Ireland's first great night in Lansdowne Road since September 1, 2001. Beglin was there that day.

Regrettably, RTE decided to alter a winning formula for the match in Warsaw the following Sunday. Jim was left at home and Ireland headed for the playoffs. Whereupon, Jim returned.

His efforts on co-commentary on that foggy night in Zenica will live long in the memory. As long as co-commentators are around, people will be talking about Beglin's performance that night. It was pleasure to (half) witness.

When Robbie Brady rippled the net with just over ten minutes remaining, lead commentator George Hamilton was nonplussed. He was none the wiser as to what had just happened.

Had he been on his own that night, the game may well have concluded with RTE declaring the match a scoreless draw.

But Jim was alert. He saw what went down early doors. Through the haze, he spotted what had happened and relayed the message to his lead commentator.

If the discipline should last for a thousand years, then Beglin's name will still be held in reverence.

Sean Quigley was always destined to one day contend for the Balls Man of the Year award. Last year, he prepared for a qualifier game against Laois by wolfing down a pizza at 2am on the night before.

He proceeded to score 2-8 the following day. Unfortunately, it wasn't enough and Fermanagh didn't go any further. This year, Fermanagh went on a famous run through the qualifiers with Quigley the star man.

He wins his place on the 2015 shortlist by virtue of his exploits on 3 August when Fermanagh faced off against Dublin in Croke Park and left without being hammered.

Quigley scored the 'alternative' goal of the year when he barged Stephen Cluxton over the line. It was the kind of goal Nat Lofthouse used to score in English football in the 1950s, a decade in which a centre forward could break a goalkeeper's neck and the goalie would be asked to stop whinging and play on.

When Cluxton was shoved back over the goal-line, Quigley turned around to pleaded with the referee to award the score. At the time, many thought it took quite an amount of cheek to turn around and claim a goal in these circumstances.

The referee didn't think so and decided, almost unbelievably, to award the goal. We may be going out on a limb here, but we suspect that had the game been any tighter he might have been more inclined to give a free out.

Despite his earlier protestations, Quigley appeared surprised that the referee had given him what he wanted. Just a touch. We haven't seen such joy on a Gaelic football pitch since the late 1990s. 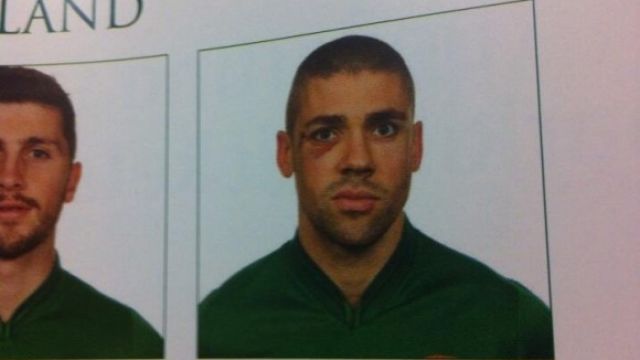 By the year's end, Jonathan Walters has firmly established himself as the nation's favourite David Cameron supporter.

Any man who can make the nation forget that he tweeted 'Yes @DavidCameron?????? Glad the country has seen sense...' is clearly the author of great deeds elsewhere.

Walters emerged as the hero of Ireland's Euro 2016 qualification campaign. He scored five goals across the campaign, the same number as Robbie Keane.

It was his performance in the second leg against Bosnia that elevated him to the status of national treasure, but we were more enthralled by his efforts in the final minutes of the Germany game.

It was there that he elevated the unglamorous and oft-derided skill of 'holding the ball up in the corner' to the level of an art-form. The composure, the nimble footwork, the magnificent use of one's arse - all present and correct.

After a couple of years when the headlines were hogged by Mark Noble and Jack Grealish, it worth remembering the Irish players with English accents who have given everything for Ireland down the years. An Jonathan Walters belongs in that tradition.

This will be an emotional night for @JonWalters19. He qualifies for Republic via his late mum. She'd be so proud. pic.twitter.com/azrK5DAHCj — Jacqui Oatley (@JacquiOatley) November 16, 2015

VOTING IS NOW UNDERWAY. HAVE YOUR SAY ON WHO SHOULD BE MAN OF THE YEAR BELOW

Article written by
Conor Neville
See more from Conor Neville
Perennial finalist in stand-up comedy competitions and former Contract Lawyer/ Coal Salesman with Corless, Corless and Sweeney
Popular on Balls
Football
19 hours ago
By Eoin Harrington
Sadlier And Duff Powerfully Put The Boot Into UEFA Over Rainbow Flag Stance
GAA
22 hours ago
By PJ Browne
'I Look At My Nephews - They've Bulked Up, They've Got Stronger'
Football
17 hours ago
By Eoin Harrington
A Mad Night At The Euros Turned Into A Very Good Evening For England
Football
17 hours ago
By Donny Mahoney
Leon Goretzka With Pointed Goal Celebration Right In Front Of Hungarian Supporters