We're still gradually digesting the news that one of the great great bastions of Ireland rugby has prematurely retired. It was an unfair way to bow out but, according to Trevor Hogan, it occurred due to the kind of act that has typified O'Connell's career

Speaking on Off The Ball last night, Hogan explained why Paul O'Connell's last act in an Irish jersey summed up the man he is in an instant.

Certain people can get away with that but you're head, kidney, ribs and hamstrings are totally exposed. And for a second row like Paul O'Connell at 6ft 5" you rarely see them going into that low position because they don't have the same centre of gravity. If that's to be the Irish career ender, in a weird way, it's sort of apt. 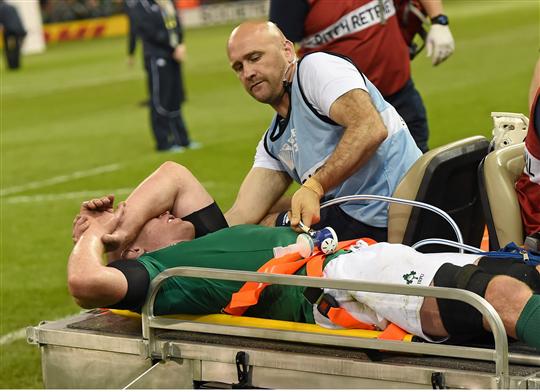 Hogan that O'Connell's selfless character on the pitch is what defines his legacy in the Irish jersey.

It's what O'Connell brings, that sacrifice and putting yourself in a position that you never see most people doing. I wouldn't use the word braver but it still encapsulates what he has done for Irish sport and for Irish rugby. In a perverse way, this will bring everyone together.

Hogan went on to reference the horrific knee injury which South Africa's Jean de Villiers encountered against Wales as an example of occasions when rugby players put themselves in danger.

The former Munster man was unequivocal in his stance that words like 'bravery' and 'courage' are improperly used when it comes to sport.

It's something I'm hesitant to use because sport is something you enjoy and you want to be there, you're not putting your life at risk. There are loads of proper examples of bravery and courage.

And while that's undoubtedly true, if you are ever going to use those words, Paul O'Connell is a man to use them about.

Article written by
Sinead Farrell
See more from Sinead Farrell
Popular on Balls
GAA
22 hours ago
By PJ Browne
'Sport Gave Me An Outlet. It Gave Me Something To Channel That Anger'
Football
8 hours ago
By Donny Mahoney
Report: Shamrock Rovers Wunderkind Kevin Zefi Very Close To Move To Inter Milan