Where And When To Watch Munster vs Racing 92 - Time, Venue, TV Schedule

Munster vs Racing at Thomond Park this Saturday will mark the 60th ever European fixture at Thomond Park. Of those said fixtures, Munster have remarkably only lost on four occasions since their inaugural game against Swansea in 1995.

The Irish club secured their place in the quarter final last weekend following a 14-12 win away to Glasgow Warriors and now sit comfortably on top of Pool 5. If they secure a win in front of the home crowd, it would result in another Thomond Park fixture in the quarter-finals.

Munster were convincing 32-7 winners when they faced the 'Top 14' champions earlier this year. It is expected that coach Rassie Erasmus will choose Ronan O'Mahony and Tommy O'Donnell to replace Keith Earls and Jack O'Donaghue respectively. While Tommy O'Donnell returns to the starting line-up.

What Time Is Kick-Off For Munster vs Racing 92?

Munster's final game of the pool stage is scheduled for kickoff at 17:30 local time. For the Irish rugby purists out there, it offers the opportunity for fans to view Ulster's game against Bordeaux-Begles at 13:00 as well. 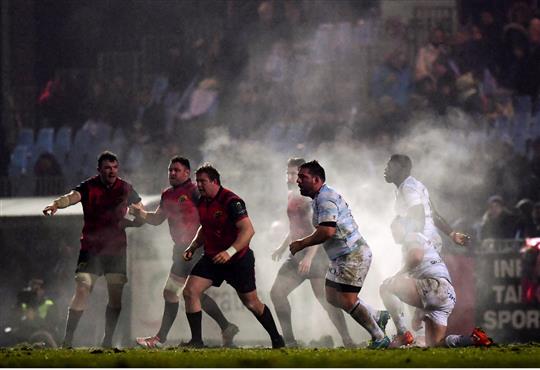 Are Tickets Still Available For Munster vs Racing 92?

Sadly not at this late stage. The Munster faithful have secured every ticket in the house in what promises to be a cracking evening for Irish rugby. However, it should come as no surprise considering Munster have sold out their previous two fixtures in Thomond Park.

Munster vs Racing 92 - The Results So Far

What Station Is Munster vs Racing 92 Being Televised?

The game will be broadcast live on Sky Sports 2 in Ireland and the United Kingdom. Fortunately, for you globetrotters, the match is available on Beinsports 12 - with coverage commencing five minutes before kick off at 17:25gmt.

Article written by
Darren Holland
See more from Darren Holland
Popular on Balls
GAA
23 hours ago
By PJ Browne
'Sport Gave Me An Outlet. It Gave Me Something To Channel That Anger'
Football
8 hours ago
By Donny Mahoney
Report: Shamrock Rovers Wunderkind Kevin Zefi Very Close To Move To Inter Milan