Why Exactly Is The Donegal-Monaghan Match Not On Television?

The rest of the country had to settle for Donegal-Monaghan coverage on Sky Sports for the most intense clash of the championship so far. The two teams are probably the third- and fourth-ranked teams in the country (behind Dublin and Kerry but ahead of Mayo and Cork).

The potential audience for tomorrow night's replay between the two sides stretches far beyond the radius of Breffni Park. The games between Monaghan and Donegal are not just pulsatingly entertaining contests; there is a bit of niggle between the two sides. This is the fifth time in three years that the teams have met in the championship and such familiarity has definitely engendered a certain amount of contempt between the sides.

The former Monaghan manager Banty McEnaney has taken a cut at Donegal selector Maxi Curran's antics of running onto the pitch when free-kicks are due to be taken. There is just that bit of needle that gets you excited.

But unless you are one of the lucky ones who can get to Breffni Park tomorrow night - then radio coverage is all that is on offer. RTE are showing Shrek The Third, followed by a repeat of Play It By Ear - a repeat of a Mike Murphy quiz show where he "explores the RTE archive" according to the guide. Obviously, those are audiences that cannot be pissed off.

Hundreds of thousands of people all over the country must be waiting with bated breath to catch Mike Murphy's romp through the clips for a second time. To air a show like that only once would be the real tragedy. It's like The Wire for the blue-rinse generation. 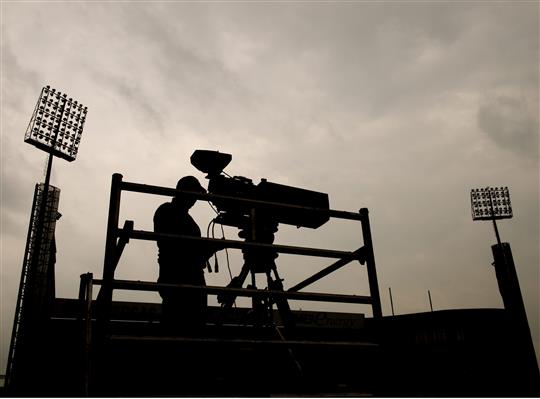 It's believed the blackout is in place because the original game between the two sides last Saturday night was shown on Sky.

Sky have already committed to showing the Cork-Dublin hurling qualifier tomorrow night so it is argued that they cannot show the Ulster clash, despite the fact that they will be repeating a programme about, and this is a direct quote from the guide... "Euros hero Wayne Rooney" on Sky Sports Three.

Can RTE step in and show a replay of a "Sky match"? Can Sky go above their allocation of 18 live games? We hear the argument that they can't change their schedule as the disruption would be too great. So why did they get involved at all. Draws happen. They are not some sort of unforeseen event.

Why can't the game be streamed? There are so many questions about the GAA deal for coverage that need clarifying.

The GAA's deal with Sky was supposed to increase reach for the games of the association - particularly for fans in the UK. But the longer it goes on, the more it seems that the GAA made a hames of the decision. Surely in the case of draws in "Sky games" then RTE should be free to have the option of screening the game if Sky don't want the replay.

The game is not on BBC either but they're a rule unto themselves anyway.

The crazy thing is - the Tyrone-Cavan replay is on nowhere tomorrow either. It's hard to imagine a sport where three of the top seven teams play (and an improving Cavan team might be in the top 10 too) in a media blackout.

Even if there wasn't room on the schedule - couldn't RTE stream the game online? There is a serious argument out there that all GAA championship games should be streamed live like is done with the NBA's League Pass.

The fact that the shock of the championship - Tipperary's win over Cork got all of three minutes coverage on The Sunday Game says it all. The coverage we do get is usually fairly decent. But there isn't half enough of it.

The half-time debate during last week's Kildare-Westmeath game was curtailled so that An Nuacht could be shown - after the coverage of gaelic games was switched to RTE One due to the Euros.

The GAA should let the television channels pick the games they want - and then stream every other game. The audience that is out there might shock them.

It's a pity we'll be forced to watch Mike Murphy tomorrow night... it's Michael Murphy we want to see.

See Also: Do Donegal Have A Serious Discipline Problem?

Article written by
Paul McNulty
See more from Paul McNulty
Admirer of all things Stephen Ireland. Comparatively lesser interests in Mayo football, horse racing, athletics and boxing.
Popular on Balls
Rugby
1 day ago
By Colman Stanley
'I Think Munster Softened Them Up For Us': Sexton Not Carried Away After Clincial Leinster Win
GAA
2 days ago
By PJ Browne
Mayo's Padraig O'Hora Using Football To Promote His Real Passion
Rugby
16 hours ago
By Colman Stanley
'That Pace, That Intensity, That Organisation' All Black Legend Has High Praise For Leinster
The Rewind
1 day ago
By Eoin Harrington
Watch: Brilliant Dermot Morgan Dublin Segment From 'The Travel Show' Resurfaces