It's time for another trip down WWF memory lane.

What better place to look at than the peak of wrestling, the 2000 Royal Rumble? 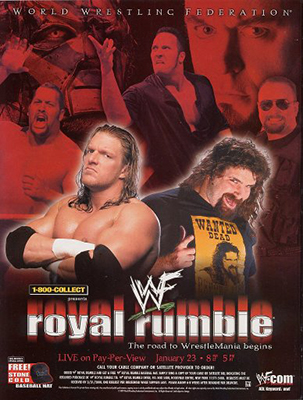 Madison Square Garden hosted a truly amazing event on January 23rd, 2000, and here are 30 moments that prove it was the best PPV event of all time. Of ALL TIME!

1. The "NYC Yellow Cab" prop at the entrance was absolutely brilliant. 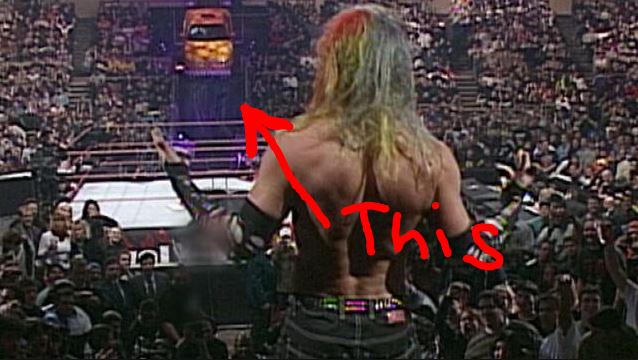 2. Kurt Angle kicks it off by talking absolute bollocks about his "mystery opponent". 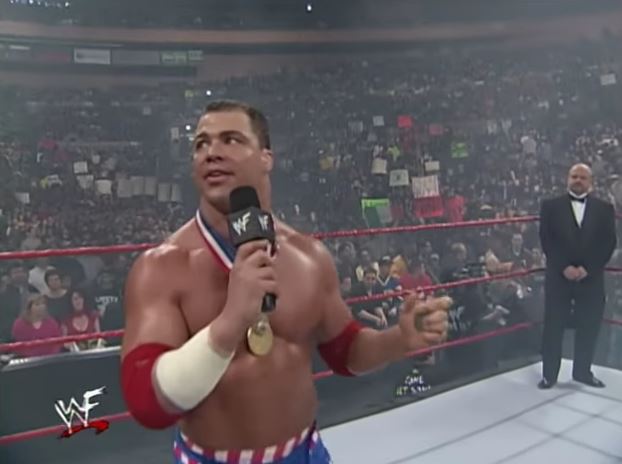 Kurt Angle vs TBD was the first match of the evening, and the two-time Olympic champion gave us a fantastic heel-speech about his three I's, and how the New York Knicks would never bring a championship to the MSG. Classic. 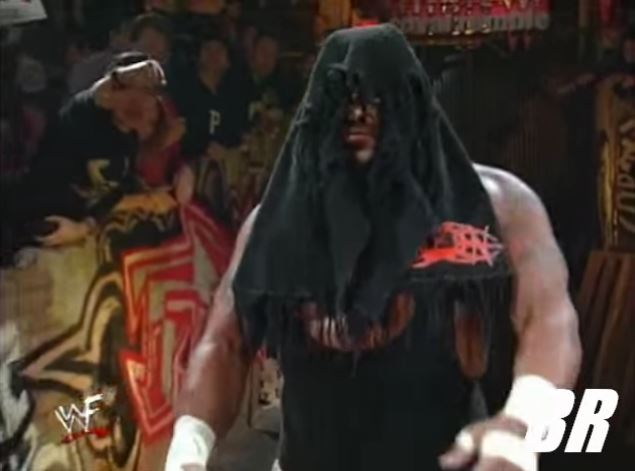 Irish Mammy's all over the country were wondering why all their tea-towels had mysterious rips in them, while dogs all over Ireland wondered why they were sent outside. Turns out every 10 year old kid desperately now wanted to be Tazz.

4. Tazz puts Angle in a choke-hold to win his WWF debut.

Some had never seen a choke-hold before Tazz put Kurt Angle to sleep, but now it was the trampoline-wrestling move of choice.

5. The Intercontinental title was on the line as Chyna, Hardcore Holly, and Jericho contested a triple-threat-match. 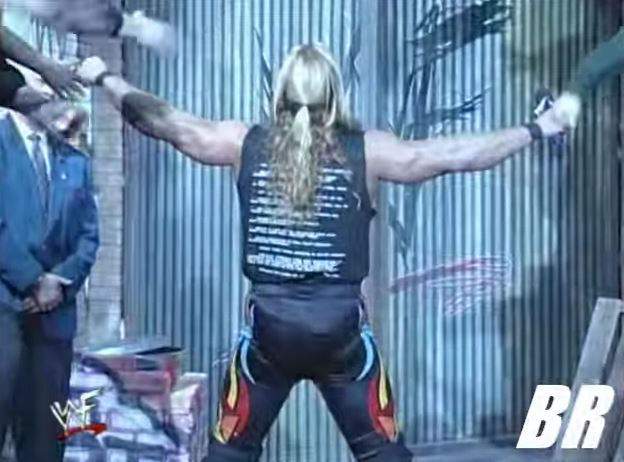 7. The Tag-Team title was on the line as The New Age Outlaws battled the APA.

After some suplexes and the obligatory unconscious referee, the APA looked to have it won until we got a guest appearance from X-Pac to help out his Degeneration X buddies.

Bad Ass Billy Gun got the pin, and the win. Bradshaw was pissed.

8. The Hardy Boyz vs The Dudley Boyz in a TLC match.

Because you weren't a cool tag-team unless you spelled 'Boys' with a 'Z'.

Twists of fate, 3Ds, an uncountable amount of chair-shots, and a few ladders thrown in all made for an incredible match that culminated in a ridiculous swanton bomb to end it.

9. The WWF Championship was on the line in a HHH vs Cactus Jack street fight.

Wow, what a match this was. Chair-shots, throwing people into the stairs, biting... This one had it all.

Because nothing says "Attitude era" like a plank of wood wrapped in barbed wire. Good luck trying to convince the parents to let you watch if they caught wind of this. 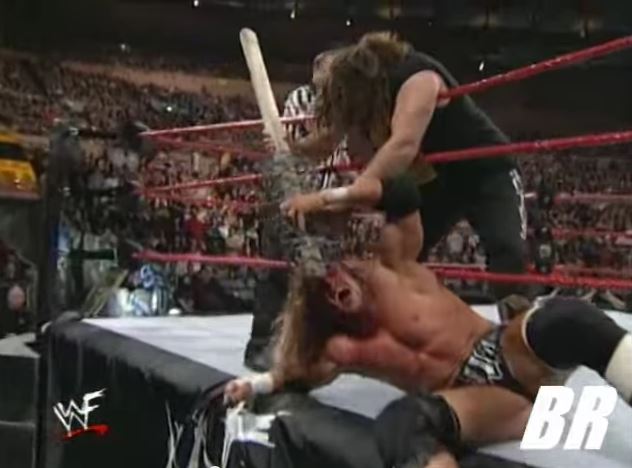 11. Mick Foley begging Triple H to hit him with the chair again. 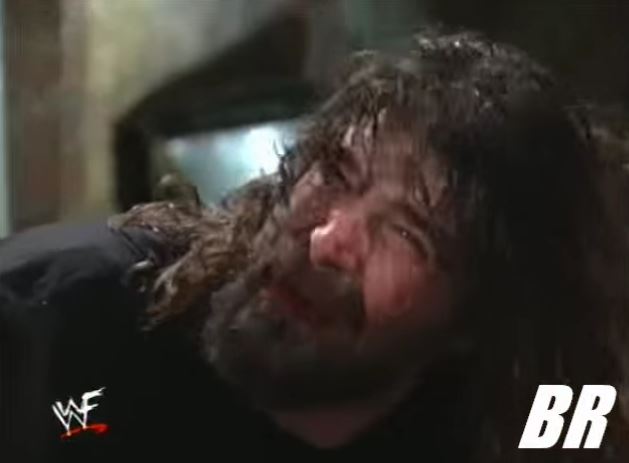 12. The Rock shows up to help out Cactus Jack.

Dwayne Johnson's first, but certainly not last, appearance of the night. 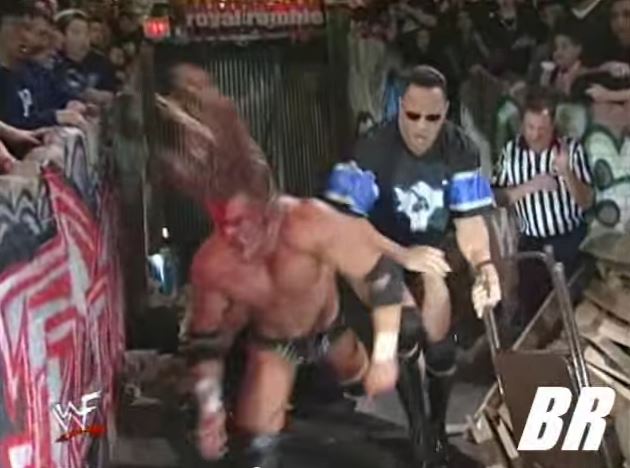 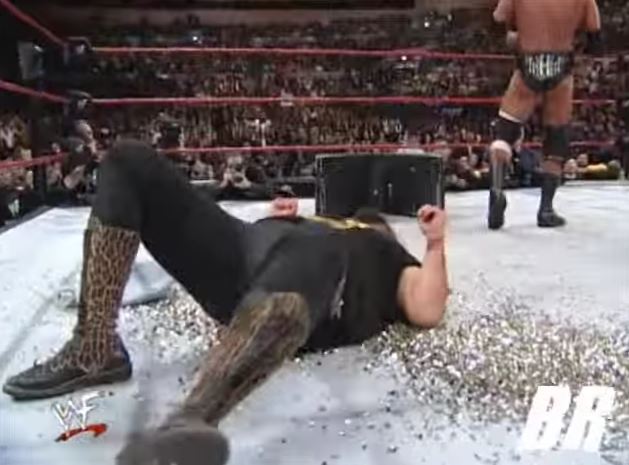 14. A pedigree onto the thumb tacks won it for Hunter.

After this HHH was brought off on a stretcher.

15. But Cactus Jack had the last laugh.

After he hauled Triple H back into the ring, stretcher and all, he beat the crap out of him again and did a sort of mini-lap of honor. 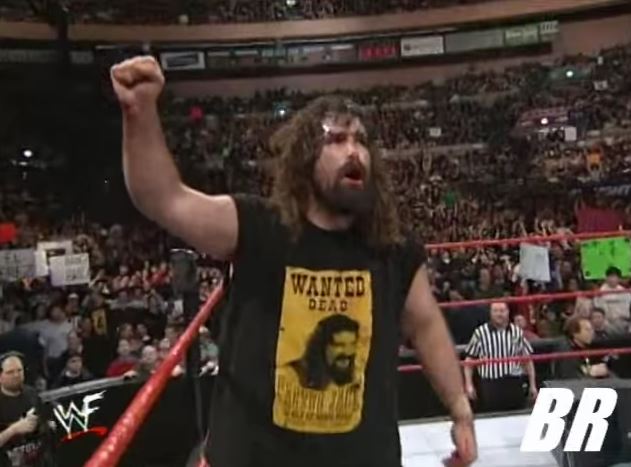 You're lookin' at the real deal now! 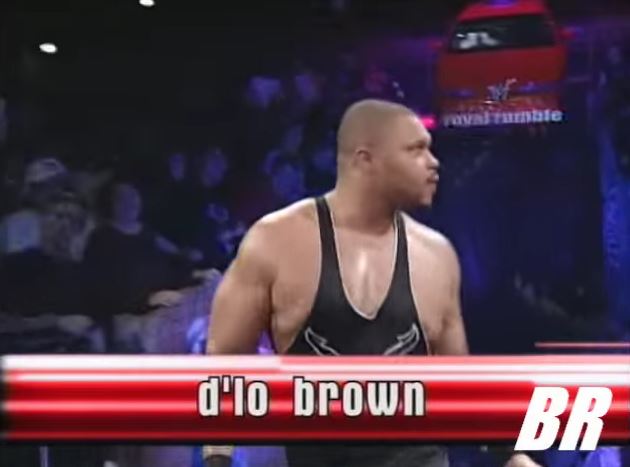 Many people were gutted to see a member of Too Cool with such an early entry and almost no chance of winning.

18. Then came Mosh and his massive furry tits. 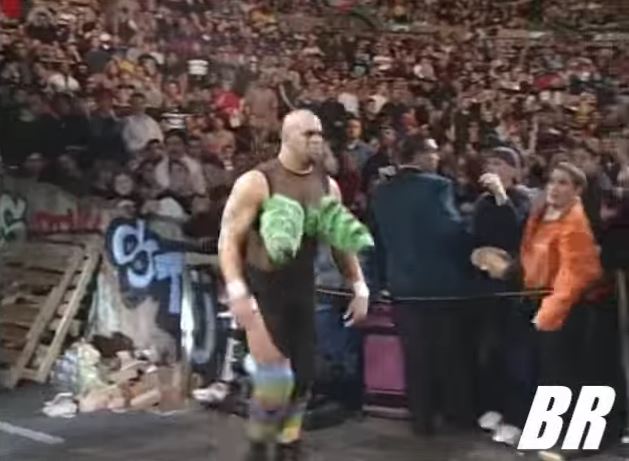 19. When this man entered, shit really started to go down. 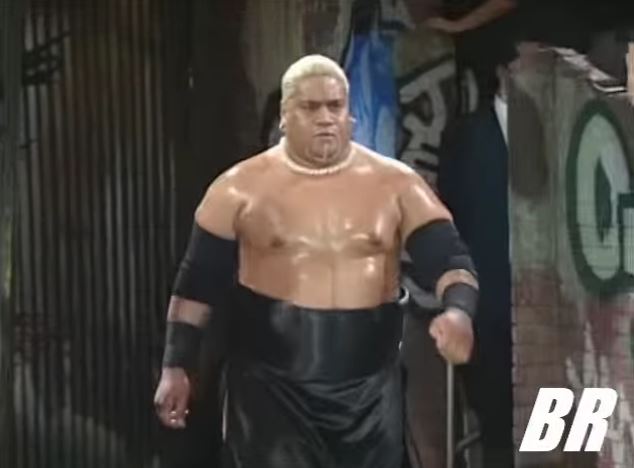 Rikishi stepped into the rumble, and he was effective. Maybe too effective, as he was soon left in an awkward spot.

20. The hilarious awkwardness of Grandmaster Sexay convincing Rikishi not to throw him out of the ring. 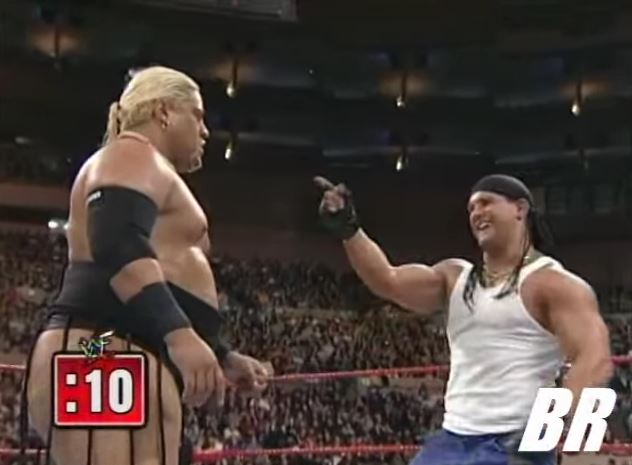 21. And then came a truly iconic moment in Royal Rumble history.

When Rikishi decided against eliminating his mate, the next man out was Scotty 2 Hotty, which meant that all 3 member of Too Cool were in the ring. Enough talk, just watch:

22. This gigantic thing came out to battle Rikishi!

Viscera, jesus! These two in the ring at the same time was a feather in the cap of every roadie who helped construct that ring. 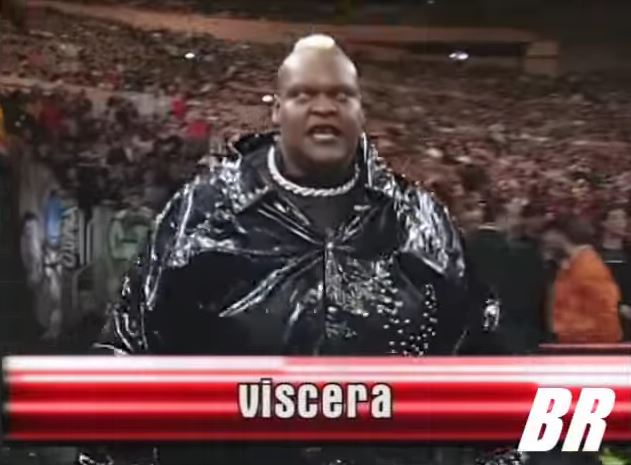 A wrestling legend no doubt, but at the time many kids wondered why this old man who had become lost on the way to bath house had found his way into the Royal Rumble. 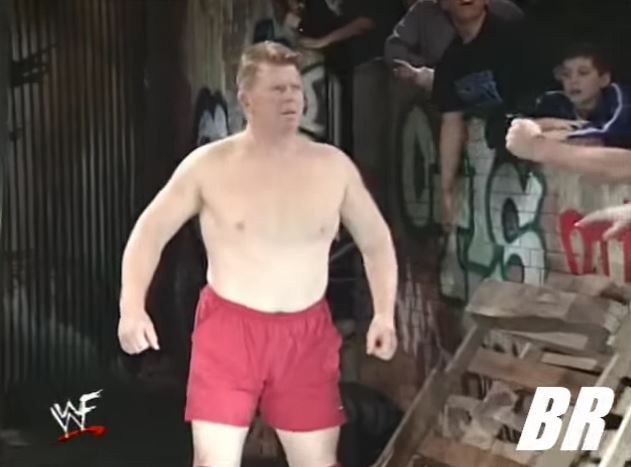 24. All the lads team up to eliminate Rikishi.

It had to be done.

25. The Rock made his entrance. 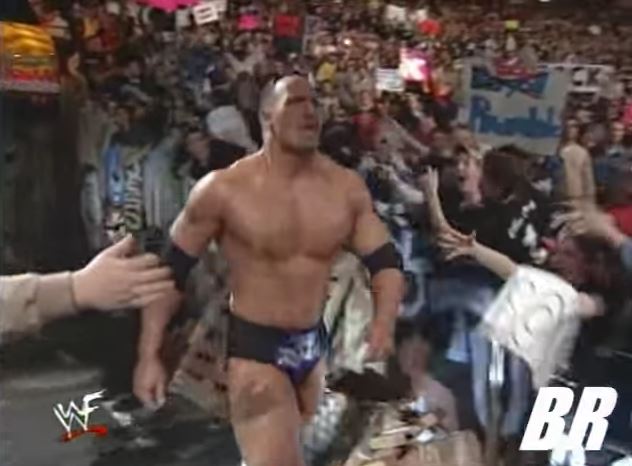 26. And so did this absolute chancer. 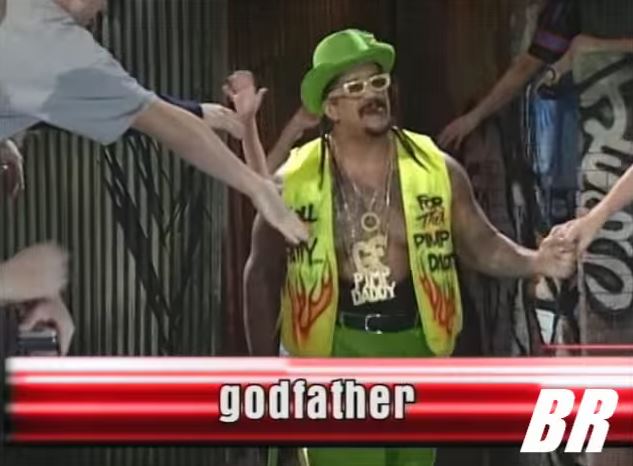 28. And then there were two, The Rock gives the people 'The People's Elbow'.

29. The Big Show responded with a massive choke-slam. 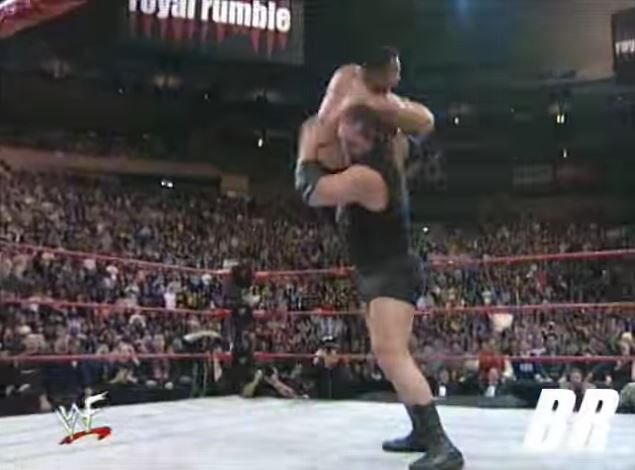 30. And then we were treated to the most electrifying moment in the history of sports entertainment...

The controversy! "DID HIS FOOT TOUCH THE FLOOR!?" was a debate that raged for months, but The Rock was the winner, and now he had a title shot at Wrestlemania to look forward to.

The WWF Royal Rumble 2000, what an event! We love it so much that we streamed our live reaction to watching it back in advance of the 2017 Royal Rumble. Enjoy!