Mageaan was visibly exhausted, literally having to crawl over the finishing line as other competitors closed in behind her.

The 24-year-old is usually a 1500m specialist. She made the semi-final of the event at this year's Olympic Games and won bronze at the European Championships in July. 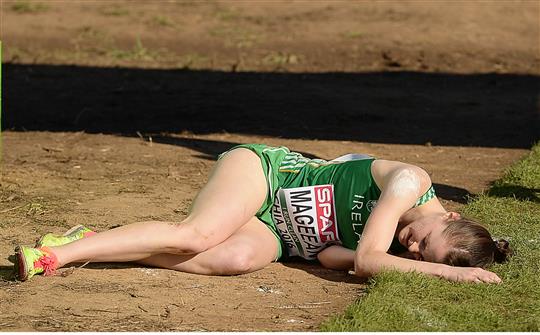 Today's event, held in the heat of Sardinia, was over the much longer distance of 8000m. It was Mageean's first time running for Ireland in a senior cross country event.

There was plenty of appreciation for the County Down athlete as she made an admirable effort to secure what could have been an all important finishing place for Ireland in the team event.

I'd much rather have heroes like @ciaramageean crawling over the finish line than recruit Kenyans to win EUROPEAN medals. Well done Ireland!

Overall, the Irish women would finish sixth. Of course, Mageean was not to know Ireland were not in the medal places at the time.

Bit disapointed but gave my all out there today,as I always will for the Irish vest.Very proud of these girls.Thank you for all the support pic.twitter.com/HXiPbCnxL8

Here's the final moments of the race.

Top performer for Ireland in the women's race was Fionnuala McCormack who finished fifth.