Leon Reid: The English-Born Sprinter With A Dream Of Running For Ireland

Deadline day is fast approaching for Bath-born Leon Reid's dream of running for Ireland at next month's World Athletics Championships.

The roadblock to him realising that ambition is not a lack of ability - he's already met the qualification standard for London. At the Great Britain trials in Birmingham earlier this month, the 22-year-old, who runs for Northern Ireland, surprised many by finishing third in the 200m.

After setting a new personal best in the heat, he ran faster again in the final. 20.38 - in a race where he finished like a train - was 0.06 inside the mark required for the World Championships. It was also a new Northern Irish record, smashing Paul Brizzel's 17-year-old 20.54.

A fast time is not Reid's problem, it's paperwork. That's paperwork he started filling out more than a year ago.

Reid wants to run for Ireland - a desire which he says would have meant him turning down a spot on the Great Britain team for the World Championships had it come his way. He told BBC Northern Ireland a fortnight ago that if a British selector had approached him on one knee, he would have said no. That's a stance he reiterates, 'Even if they had offered, I wouldn't have any interest.'

An application for an Irish passport started the process of switching his allegiance from Great Britain to Ireland. That came two-and-a-half years after he began running for Northern Ireland. Around that time, members of his family suggested that he should run for Ireland.

It was always in the plan. My family spoke about it when I moved over from England to Northern Ireland. They said, 'Why don't you run for Ireland?' but my coach was tied into British Athletics and I might have been getting funding at the time.

A deteriorating relationship with British Athletics was the starter's gun for his desire to switch. Already in the blocks in terms of considering a switch, Reid felt he was being ignored. That was despite having won 200m silver at the 2015 Euro U23s and being England U23 200m champion in 2015 and 2016. 'They didn't really show any interest to be fair, picking other people for races without consulting me. Little things like that and the relationship slowly dispersed,' he says.

His Irish passport application took longer than expected to come through. His birth mother had died; her birth certificate and death certificate would be required - that was just one very unfortunate complication.

The maroon book eventually arrived as an early Christmas present. It was the final piece of proof he required. The full application was dispatched just days into the new year. Still, more than six months later, Reid is still awaiting word from the IAAF. He's been working hard in that time to get the application pushed through. Emails are being sent and leads as to what might be causing the delay are being chased, 'We're trying to press them but not annoy them.'

Athletics Ireland has also been working on his behalf. That being the case would suggest that if his application was rubber stamped by the IAAF in time for the World Championships, selection for Ireland would follow.

Reid's Irish connections are strong. His birth mother was from Belfast; his foster mother is from Enniscorthy, Co. Wexford. Though he would not stretch to say that he was brought up as Irish, it's always something of which he has been keenly aware. 'My grandparents were from Belfast. They were very strict Catholics,' he tells. 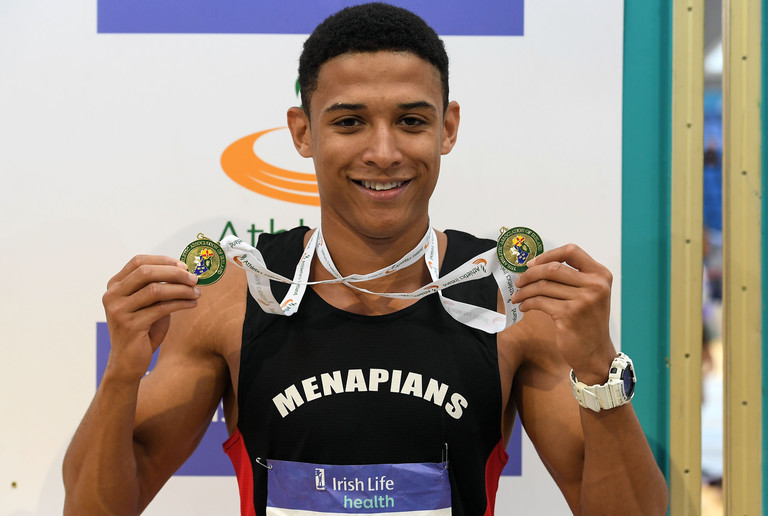 It's his connection to Wexford which led to him running for Menapians AC. Shane McCormack, a coach with the club, is his cousin through marriage.

Earlier this year, at the Irish National Indoor Championships in Athlone, he did the 60m and 200m double wearing the Menapians singlet. On Wednesday night at CIT, he came third in the 200m at the Cork City Sports while running for the Wexford club.

I met up with Menapians and they seemed like a good group of lads. The relationship built from there really. We went away to Torremolinos training together. We just got on really well, I wouldn't want to be anywhere else.

Reid says that overall, he's received a warm welcome from the Irish athletics population. Though that reception has not been universally positive. There has been hostility on social media. Shots have been fired while his application works its way through the red tape.

Just after I ran my [World Championship qualification] time, there was a lot of controversial stuff on Twitter. Just random people that I don't even know.

I can't remember one of their names but he works with Irish athletes. I think he's a physio or a coach. He had his say on it. I ignored it. You get stuff like that all the time. It's about how you deal with it. I didn't let it get to me or anything. They've always got something to say.

Just things like, 'He's not even Irish,' 'I don't even know why he has a passport,' things like that.

It can be easy to switch off from negativity in digital form but it's not that simple when it's coming from your own Northern Ireland teammates.

'There are athletes that are on my Northern Ireland team that are still questioning me running for Ireland. I've still got to shake their hands and say hello to them when they come up to me,' he told BBC NI earlier this month.

Reid puts their opposition down to them feeling that their places are in danger.

It was sly digs and people who are used to just walking into teams who feel a bit threatened. Obviously, if they're number four on the relay, they'll get pushed down. But I'm not really here to take anyone's spot. I'm just trying to enjoy my running and break some records.

Though he can see a reason for their bitterness, it's one he finds hard to accept, 'I am actually Irish, I can't understand why people can't get that into their heads.'

In some respects, it's hard to blame individuals for feeling threatened: Reid has a strong CV. Along with his Euro U23 silver medal, he also has a European junior silver from 2013 and he's a former English Schools 100m champion.

Add to that a certainty that he can get faster, 'a lot faster' he believes. 'Training hasn't even been going that well recently,' he reveals. That's a recent period in which he smashed his PB. His 20.38 for 200m would put him at number two on the all-time Irish list, just Paul Hession's 20.30 Irish record is quicker. There's also his age. At just 22, his peak as a sprinter is still years away.

Even if his application to run for Ireland is not approved in time for the World Championships, his motivation will not be dampened. 'Nothing's going to stop it,' he's said previously.

In the meantime, while he sits in limbo awaiting the IAAF seal of approval, a tattoo with an Irish reference will serve as an indicator of his allegiance.

I'm getting a tattoo. I'm getting some writing on the side of my ribs. I won't give it away yet but it's Irish based. It's just a phrase that me and Shane thought of when we were away.

Marcus Lawler: The Young Carlow Sprinter On The Road To Becoming The Fastest Irishman Ever

Other Sports
2 years ago
By Emmet Bradshaw
"I'm Just So Glad I Pulled It Out On The Day...Unbelievable"
1