The club of the man who won 100m gold at the National Championships last month caught the eye. It was Tralee Harriers. For the first time in 14 years, someone from a Munster club had won the title.

Dig a little deeper and the story of Travane Morrison is even more interesting: the 26-year-old is a Jamaican living in Kerry.

Morrison arrived in Ireland in October 2017 on a UNESCO scholarship for a research masters at Tralee IT. After competing in the 2018 Irish Universities Indoor Championships - where he finished third in the 60m and second in the 200m without having done any real training - Morrison joined the Harriers.

Unsurprisingly, Morrison is not without a sprinting background. He was a high school champion in Jamaica and studied Sports Management on a scholarship.

His win in Santry last month - where he ran 10.61 to finish ahead of Paralympian Jason Smyth - was claimed in far from an ideal physical condition.

"I pulled my hamstring the week before," Morrison told Balls.

The whole week was rehab. I didn’t say I was going until the Wednesday before the championships. It’s extra-special knowing all I had to go through.

Morrison was generally injury-free until he developed a knee issue. As he finished his masters - which looked at the effects of exercise on organ transplant patients - the longs hours spent at a desk exacerbated the troubles.

"That’s when I started having problems with my back, my hamstring, my knee - it was a whole barrage of pain," he says.

Though he knows he has talent and has been told so by many coaches, "school comes first" has always been his philosophy. 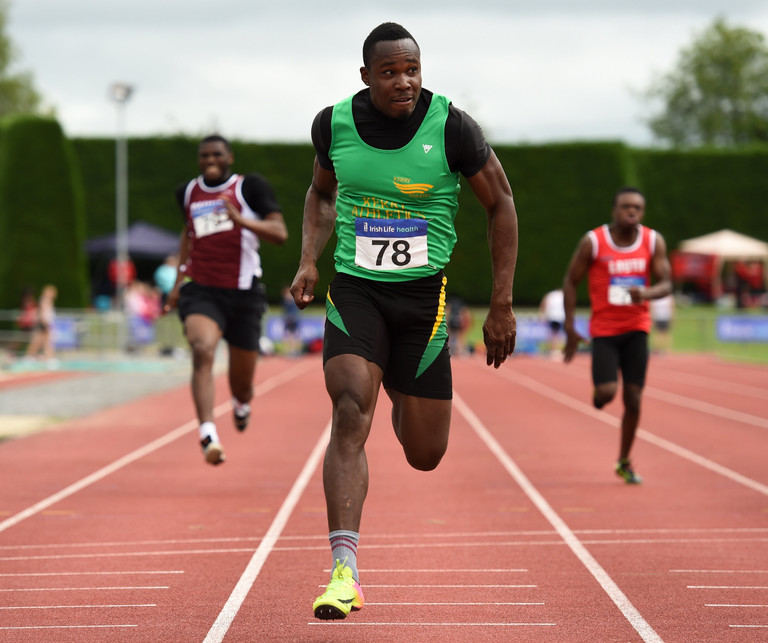 "I’ve seen too many people focus on the athletics side, get a serious injury and then they end up with nothing. Their scholarship is gone and you don’t have the money to finish your degree.

"I didn’t want that to happen to me. So I just focussed more on keeping my grades up. That way, if anything should happen, I could possibly get that academic scholarship. I finished my degree at 22, turning 23.

"I still have time to be a professional athlete but at least I have something in my back pocket in case anything happens. "

When he first came to Ireland, the weather and infrequent public transport compared to Jamaica were the obstacles to settling.

I didn’t even know there was a place called Tralee. All I knew was that there were places in Ireland called Cork and Dublin.

My last name is somewhat Irish/Scottish. So I was meant to be here someday.

After listening to the High Kings a couple of years prior, I was aware of Ireland. People would say to me, ‘What the hell are you listening to?’

Morrison coaches himself, believing his attention to detail is superior to most. He ran a 10.41 100m personal best at the Cork City Sports last year. His best over 200m is 20.86.

His education complete, Morrison wants to put more emphasis on his athletics career. The 200m is where he believes his future lies.

What he needs first is a job. His visa runs out in October, though he can extend that further to look for work.

He has done sprint technique coaching with a few clubs in Kerry and Limerick and believes there are big gains to be made by GAA, soccer and rugby teams.  That they need more than a single day of coaching has been a hard message to impart.

"I’m open to most things. It’s hard to say, ‘These are the type of jobs I am willing to do’.

"The issue is being an international student seeking work is that Irish companies, for the most part, give preference to Irish and EU citizens.

"My [scholarship] funding finished two months ago now, I’m still paying rent, all my savings are gone. That’s where I stand right now."

Long-term, if he was to stay in Ireland, Morrison would like to compete in the green singlet.

"There’s definite interest there on my part," he says.

"I’m just not sure if there’s interest on anybody else’s part in that regard.

"I’m trying to stay in Kerry, ideally, but wherever the opportunity is, I will go. I have this connection with Kerry and Tralee; this small, underdog place in everything but football.

"Tralee is quiet. So, I’m happy that I’m here and not in Dublin. It suits my personality. It’s good being here and doing something as opposed to going somewhere where people win all the time anyway."