The Brooklyn Nets' short trip to play the Boston Celtics was bound to firey given Kyrie Irving's acrimonious departure from Boston before joining the Nets in the off-season. Despite not traveling to the game due to a shoulder injury, Irving was unsurprisingly the target of a section of vocal Celtics fan as their team secured a 121-110 victory.

Banners and posters branding Irving a "coward" were plentiful, while chants of "Kyrie Sucks" and "Where's Kyrie" could be heard throughout the night.

These fliers are posted on poles across the street from TD Garden. Kyrie Irving will not play tonight in Boston. pic.twitter.com/csk2mC3cuI

A bunch of these posters have been plastered around the TD Garden right before the Celtics face the Nets tonight pic.twitter.com/m1Pzz6iWix

There is no love lost for Kyrie Irving in Boston ... pic.twitter.com/t89t7f3h3X

After the game, an upset Irving posted on his Instagram story, blasting the entire concept of sports entertainment as whole. 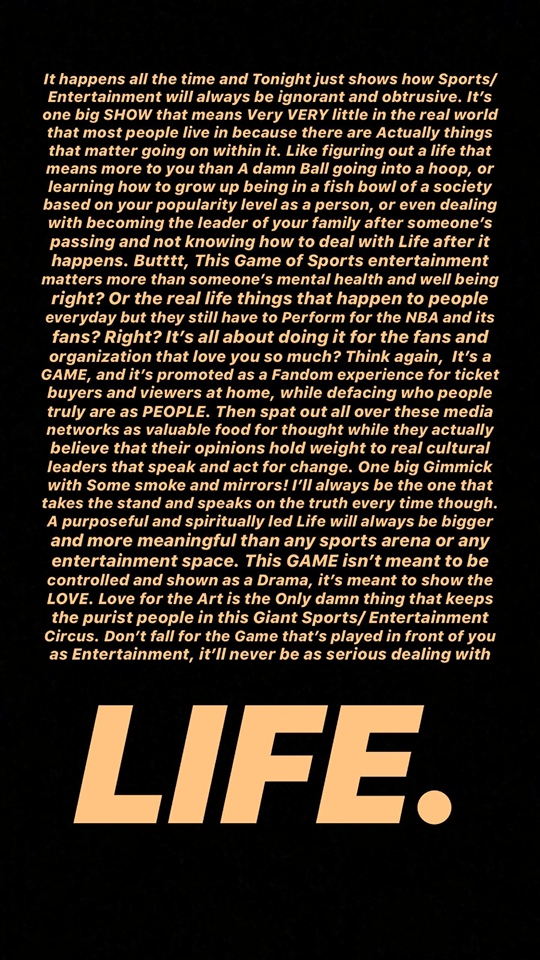 "It happens all the time and Tonight just shows how sports/ entertainment will always be ignorant and obtrusive. It's one big show that means very very little in the real world that most people live in because there are actually things that matter going on within it.

"Like figuring out a life that means more to you than a damn ball going into a hoop, or learning how to grow up being in a fish bowl of a society based on your popularity level as a person, or even dealing with becoming the leader of your family after someone's passing and not knowing how to deal with life after it happens.

"Butttt, this game of sports entertainment matters more than someone's mental health and well being right? Or the real life things that happen to people everyday but they still have to Perform for the NBA and its fans? Right? it's all about doing it for the fans and organization that love you so much?

"Think again, It's a GAME, and it's promoted as a fandom experience for ticket buyers and viewers at home, while defacing who people truly are as PEOPLE. Then spat out all over these media networks as valuable food for thought while they actually believe that their opinions hold weight to real cultural leaders that speak and act for change. One big gimmick with some smoke and mirrors!

"I'll always be the one that takes the stand and speaks on the truth every time though. A purposeful and spiritually led Life will always be bigger and more meaningful than any sports arena or any entertainment space.

"This game isn't meant to be controlled and shown as a drama, it's meant to show the LOVE. Love for the art is the only damn thing that keeps the purist people in this Giant Sports/ Entertainment Circus. Don't fall for the game that's played in front of you as entertainment, it'll never be as serious dealing with LIFE."

You get the feeling he won't find much sympathy around Boston.

See Also: How The New Calendar Can Help Address The Biggest Problem For The GAA

Basketball
1 week ago
By Balls Team
PREVIEW: Tralee Look To Tighten Their Grip On The Super League Lead
Previous Next