Ireland’s Jason Quigley has released a statement to social media following his second round loss to Demetrius ‘Boo Boo’ Andrade in the early hours of Saturday morning.

The Donegal man apologised to his fans for the early knockout and congratulating Andrade, continuing what was a fairly amicable build-up to the fight.

The statement also revealed that Quigley suffered a broken jaw in the first round, no doubt hampering his chances to compete with the heavily favoured American.

“Firstly I would like to thank everybody for the amazing support I had for this fight it was unbelievable and something I will be forever grateful for.

I want to apologize to everyone that I didn’t give you more excitement and wasn’t able to put up more of a fight believe me I wanted to, I’m hurting most because I didn’t get the chance to show my full worth and give it more.

I suffered a broken jaw in the first round and now it’s time to head home get it sorted and healed. Then we look at what’s next.

Congrats @boobooandrade on the victory and I hope you get those big fights you deserve.

Thank you to my family my team and everybody that helped me along my journey to here, I had one of the best experiences of my life right up until the fight but that’s boxing it’s a brutal sport and maybe that’s why we love it.”

Andrade also released his own statement via Twitter, thanking Quigley and calling out fellow middleweights Gennady Golovkin, Jermall Charlo, and Jaime Munguía, whom he had also called out in the ring directly after knocking out Quigley.

Congrats to @jay_quigley and @WayneMcCullough wish them all the best. Thanks to everyone who supported and watched on @DAZNBoxing The fight went the way I expected. I only want @FutureOfBoxing @GGGBoxing or @jaimemunguia15 next! #ATeam #unification

The consensus following the fight was that while Quigley was out of his depth against the much stronger Andrade, he will be back in the ring soon such is his character.

The US boxing media were gushing over the continued rise of Andrade whose has now taken his record to 31 wins with 0 losses and 19 KO's. For Quigley, there's no shame in dreaming big and it's on to the next challenge.

Class pic here of @jay_quigley with his mother, Muriel, and partner, @AprilMcManus, after Friday’s defeat at the hands of @BooBooAndrade

It wasn't to be for Jason Quigley tonight, who was stopped in the second round of his world title fight against Demetrius Andrade. The Donegal man will be back ☘️ #AndradeQuigley pic.twitter.com/oKeXlSLkEE 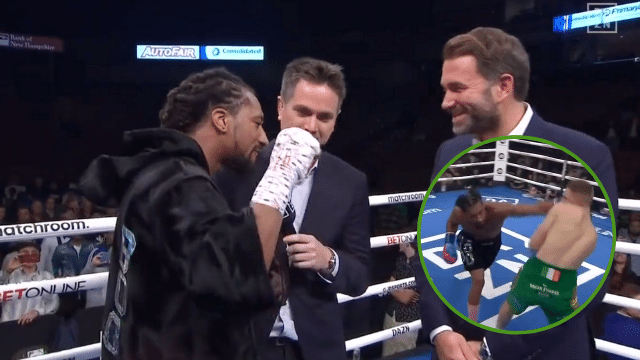