'There's No Pressure On Me': Quigley's Honest Assessment Of Fight Week

We're a mere two days removed from the biggest night of Jason Quigley's boxing career, as he preps to fight for a WBO middleweight world title.

It's something that the WBO-NABO strap holder knows is the pinnacle of his career so far. But he's not overthinking things during fight week.

"It's something that you know, you have to find a balance in this whole buildup. It's an amazing opportunity, it's something I've trained for as a kid," he told Matchroom Boxing.

He's settled in well stateside in New Hampshire. While it might be enemy territory on paper, Quigley has had plenty of support from home.

Whether it's the masses of Irish descendants based in the locality or the Irish support flying in from home. He said he's feeling the love already.

Quigley has spoken before about his amateur background and how it'll aid him on Friday night. Fighting different styles such as the unconventional Demetrius Andrade is not uncommon on amateur circuits.

He's likely carried out plenty of homework on Andrade and his fighting style. But much of his preparation for this fight has been surrounding himself with some of the best.

Whether that's his trainer, Andy Lee, a former WBO middleweight world champion, or some of the heavier bodies he's been in the ring with in sparring.

His experience on Fury's home turf in Morecambe, England, stood to him. "Walking around the gym, seeing all his pictures, his victories, his wins, it's a sense of motivation for me."

Steve Collins is another Irishman who held the WBO middleweight world title before. Quigley doesn't want to settle at looking at pictures of the belt up on the wall in his home gym in Raphoe.

Pressure Is For Tyres

Many have pitted Quigley as the underdog heading into his fight. It's not so much a reflection of Quigley's ability but more so a testament to the champion Andrade.

At 30-0, the titleholder has amassed an impressive professional record, finishing over half of his fights. While he's aware of the challenge - Quigley reckons all the pressure is on him.

"I'm loving the underdog situation," Quigley said. "Demetrius is looking at Canelo, Golovkin, all these types of big fights. Whereas, there's zero pressure on me in this fight."

"Demetrius gets in there and wins - that's what he's expected to do. All the pressure is hyped on Demetrius," he said.

When it's all said and done on Friday night, Quigley is relying on his self-belief to shine through. He's leaving it all between the ropes if he has it his way.

"From the inside, inside me, in my heart and in my mind, I know I'm going to go in there and give him one hell of a fight. Exactly as I said when I called him out."

See Also: How To Watch The Quigley-Andrade WBO Title Fight 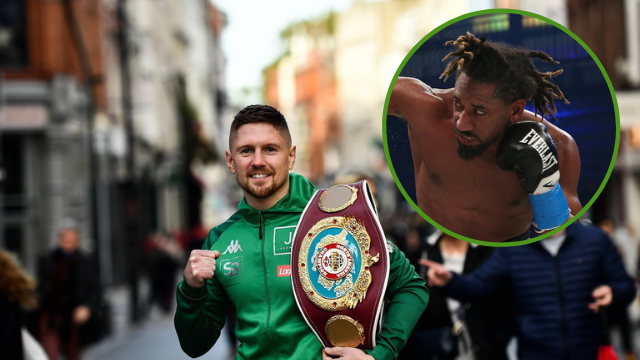