Taylor-Serrano: All The Info You Need For The Blockbuster Fight

The biggest fight of Katie Taylor’s career, and in the history of women’s boxing takes place in the early hours of Sunday morning, as the Bray fighter takes on seven division world champion Amanda Serrano. This will be the first women’s fight to headline Madison Square Garden, as the pound for pound #1 and #2 will face off in a historic night headlining a 10 fight card. We have all of the info on Taylor-Serrano, including the Katie Taylor fight time in Ireland.

For one of the biggest fights ever. For the first women to headline @TheGarden. For two icons changing the sport of boxing. @KatieTaylor vs. @Serranosisters – it’s for HISTORY 🥊

RETWEET if you’ll be watching women’s history go down on April 30.#TaylorSerrano pic.twitter.com/34mMqQydzN

Here is all the information you need to watch Katie Taylor v Amanda Serrano.

What is the Katie Taylor fight time on Saturday?

The fight will start in the early hours of Sunday morning. While it's hard to pin down the Katie Taylor fight time exactly, it's believed the ring walk should commence at 2.30- 3am Irish time. This week, Eddie Hearn confirmed the fight won't clash with the other big boxing fight that night, and said to expect a ring walk time around 2.45am.

How can I stream Taylor-Serrano?

The fight will be streamed live on DAZN, which costs €7.99 a month. You can subscribe to the service here.

Here are some of the other confirmed fights on the card.

What Are Both Fighters Saying Heading Into The Fight?

Taylor has been as humble as usual heading into this historic fight, claiming it’s a 50-50 bout.

“Amanda Serrano is a fantastic fighter, she’s a great champion and she’s not here for no reason. She deserves this opportunity as well. She’s been pioneering her own way and that’s why this fight is the best fight in female boxing history.

I love being involved in these type of fights.”

Co-promoter of the fight Jake Paul believes Serrano will have too much for Taylor, claiming she offers a similar skill set to Delphine Persoon, arguably Taylor’s toughest opponent to date.

“I think it put a lot of miles on Taylor’s boxing odometer, and the difference between Persoon and Serrano is that Amanda goes to the body a lot more, while Persoon was headhunting, and it gave Katie a lot of trouble and arguably some of those rounds should have gone the opposite way.

So I think what we are going to see is a very similar match-up stylistically, except I think Amanda is going to slow Katie down a little bit more.” 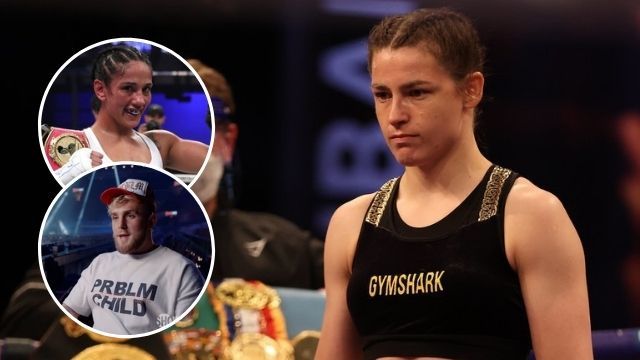