Katie Taylor's mission of unifying the lightweight division could potentially be achieved at Madison Square Garden on June 1st.

The Olympic Champion is the reigning IBF and WBA lightweight champion and gets the chance to add the WBO title to her collection in Philadelphia on March 15th against Brazilian Rose Volante.

If she is successful in adding the third strap to her collection, Taylor's manager Eddie Hearn has revealed that the Bray fighter may get a chance to fight for the fourth and final belt on the undercard of Anthony Joshua's heavyweight title clash with Jarrell Miller. 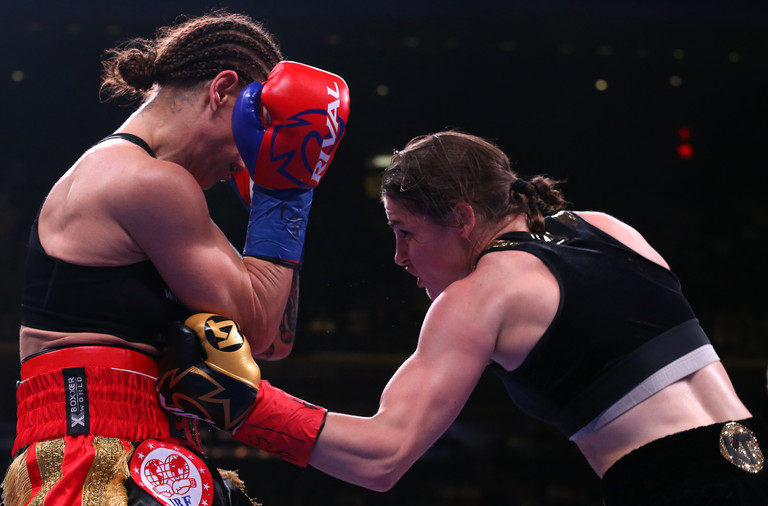 Hearn also revealed that he has held preliminary talks with the camp of current WBC champion Delfine Persoon. The Belgian fighter is 42-1 and would potentially serve as the toughest task of Taylor's professional career so far.

Katie has to get through Volante first but we want to try and have the undisputed fight for all four lightweight belts on the AJ card.

Persoon’s team want the fight to happen in Belgium, where she’s from, but I’m saying as a compromise let’s do it at Madison Square Garden.

You used to be able to get an opponent like that for around $30,000 but now it’s several hundred thousand instead.

But Taylor against Persoon would be the perfect fight to put on this card and we’re determined to make this happen.

Of course, all this depends on both Taylor and Persoon winning their next fights. Persoon is set to defend her WBC title against American Melissa St. Vil on March 9th in Kortrijk, Belgium.

However, Hearn is confident that a deal will be agreed upon. That would give Taylor just under 12 weeks to prepare for a potential unifying bout on June 1st.

SEE ALSO: "A Monumental Year For Me" - Katie Taylor Is Ready To Take Over The World In 2019

Boxing
3 months ago
By Daniel Hussey
Tyson Fury Trolls Anthony Joshua By Offering To Train Him For Free To Beat Usyk
Boxing
3 months ago
By Gary Connaughton
Watch: Eddie Hearn Was Fuming With Comment From Fan After Joshua Loss
Boxing
4 months ago
By Jonathan Browne
How To Watch Joshua Vs Usyk: What Time and How Much?
Popular on Balls
Football
2 days ago
By Jonathan Byrne
Report: Festy Ebosele Attracting Interest From Bundesliga And Serie A
Football
8 hours ago
By PJ Browne
'If He Continues With Performances And Goals Like That, Stephen Kenny Will See It'
GAA
2 days ago
By PJ Browne
Army Gave Sue Ramsbottom No Time To Drown Sorrows After Laois All-Ireland Loss
Football
1 day ago
By Jonathan Byrne
Peter Crouch's Stories of Being David Ginola's Bootboy Are Comedy Gold