'I Am Not Really Concerned About What Other People Are Saying'

The title of undisputed after a fight that was anything but. Katie Taylor's five belt haul came after a gruelling ten-round war against Delfine Persoon in a scrap that was far from a formality.

Sitting alongside her manager Brian Peters, Taylor is upbeat and defiant. She's quick to acknowledge the competitiveness of the contest but is certain there was no robbery in Madison Square Garden last Saturday.

"I knew at the time that it was a very, very close fight," the Irish star tells Balls.ie. "I knew it was going to be a tough fight."

We were very confident that we had did enough early on to actually win the fight. The fight could have gone either way, no doubt about it. It was a very close but I thought I was a deserved winner and I am sitting here as the undisputed champion.

I am not really too concerned about what other people are saying. The opinion I do care about are the people closest to me. My family and my team, they are very honest. They all had me winning six-four. 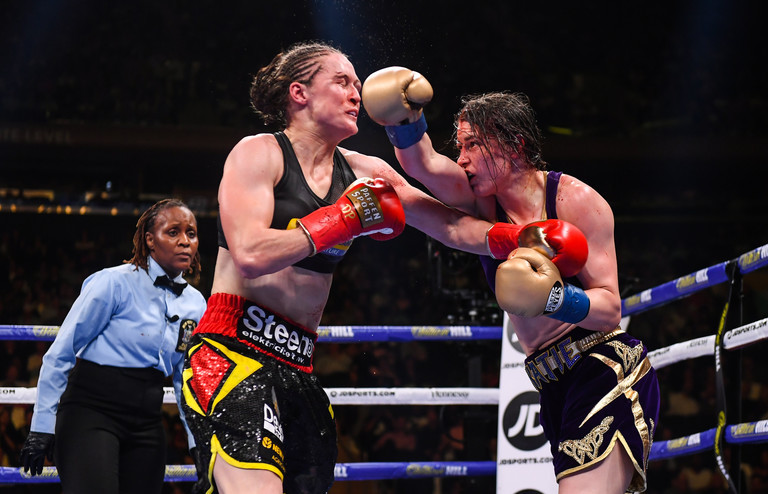 Persoon hasn't taken the defeat lightly. There have been grievances and appeals aplenty. Manager Filiep Tampere has also immediately offered a €300,000 purse for the rematch, on the condition it takes place in her home country.

"Is that in Belgium? the Mecca of boxing!" Taylor jokes in response.

As for manager Peters, he is equally as dismissive of that approach.

It's ludicrous actually. It is a crazy statement. She is not in any position to be making any demands. If she is that interested let her go to America and start making a bit of a name.

"It was only Katie's 14th pro fight. The journey continues. We have our plans and our path set out. It has worked pretty well so far, so we are going to stick with that."

Boxing
2 years ago
By Maurice Brosnan
Superfight With UFC Star Now A Possibility For Next Katie Taylor Fight As Serrano Stalls
Boxing
2 years ago
By Maurice Brosnan
'The Deal Is Done, The Purse Is Agreed. She Has Signed' - Taylor's Camp Confirm Next Move
Popular on Balls
Football
16 hours ago
By Colman Stanley
BBC Apologise After 'Manchester United Are Rubbish' Ticker Error
Football
1 day ago
By Gary Connaughton
Gary Neville Worried About Future Of Burnley After Relegation To Championship
GAA
2 days ago
By PJ Browne
Controversy In All-Ireland U20 Hurling Final Over Dubious Crucial Point
GAA
22 hours ago
By PJ Browne
How A Kerry Guard Ended Up Playing For The Tipperary Footballers