Kellie Harrington did the nation proud this morning in Tokyo, taking home a gold medal on the final day of the Olympics for Ireland - and one moment at the medal ceremony was missed by RTÉ and would have made the nation even more proud of Kellie.

Harrington took home a gold medal after a unanimous victory over Brazilian Beatriz Ferreira in the early hours of Sunday morning. It was an incredible win, especially considering she had narrowly lost the first round.

The medal ceremony took place shortly after, with Kellie Harrington proudly taking the top step of the podium, and it was an emotional moment for the Dubliner.

A sporting woman to the last, Harrington made sure to give the other medalists the recognition they deserved. With Ferreira and the two bronze medalists about to leave the podium, Harrington pulled them all on to the top step to celebrate their achievement.

The four medalists then embraced, in a touching moment that represented all that is great about the Olympics.

This was missed by RTE. A beautiful moment between all the medalists #kellieharrington pic.twitter.com/IpLgZKo5Wy

It's perfectly in character for Harrington as well, with the Dubliner sportingly raising the arm of all those she fought during the Tokyo Games and ensuring to embrace and congratulate all on their achievements.

Her reaction to seeing the footage of crowds in Portland Row was another example of her brilliantly down-to-earth nature, as she exclaimed, "I didn't even think anyone would be up watching!"

The medal ceremony at Tokyo 2020 is just another example of the brilliant sportsmanship of Kellie Harrington, and it's hard to think of a more fitting gold medalist for Ireland. Harrington has done the country proud, and we can hopefully look forward to seeing her contend for gold yet again at Paris 2024. 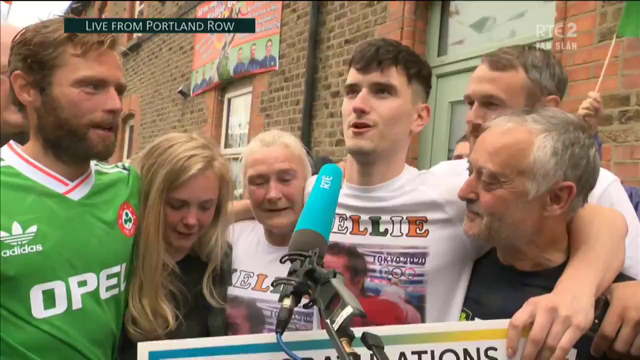 Boxing
4 months ago
By Andrew Dempsey
'Less Stress, More Success': Kellie Harrington On Staying Amateur
Boxing
5 months ago
By Eoin Harrington
Kellie Harrington: Fair City In Tokyo, Tourism In Portland Row, And Going Pro?
Olympics
5 months ago
By John Dodge
The State Of Play For Irish Olympic Sport - How Are We Fixed For Paris 2024?
Popular on Balls
Hurling
1 week ago
By Balls Team
A Tribute To GAA Players Who Looked Significantly Older Than Their Age
Rugby
2 days ago
By Colman Stanley
The Fascinating Journeys Of The 2012 Ireland's U20 Rugby Team
Football
1 day ago
By Gary Connaughton
Some Pundits Are Revelling In Rafael Benitez's Everton Sacking
32