'The Fights Are Going To Happen. Eventually, I Am Going To Shut Them Up'

Sporting a bruise above her right eye and a new belt, Katie Taylor sits down to reflect on her latest accomplishment; A two-weight world champion.

Adding the WBO super-lightweight strap to her collection after victory over Christina Linardatou means she is just the third ever Irish fighter to win world titles in two weight classes after Steve Collins and Carl Frampton.

During the bout, the Bray boxer was clinically controlled throughout. Afterwards, it was clear this meant a great deal as a moved Taylor took a moment after the final bell to soak in a celebrating arena. 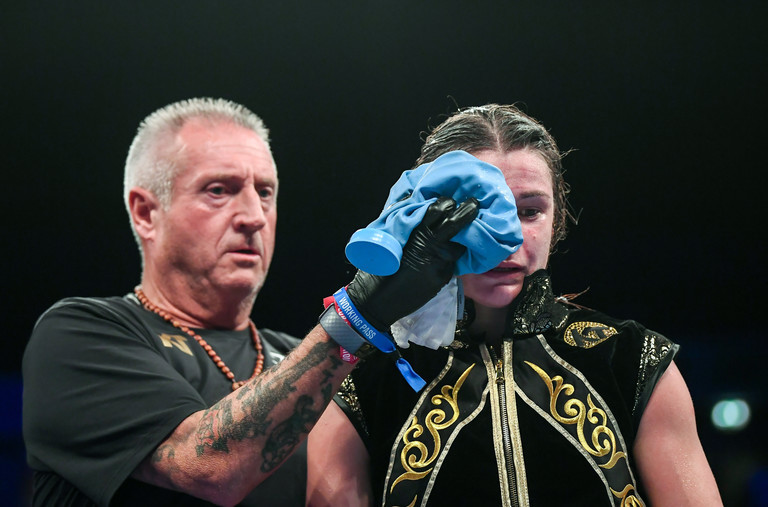 That elation is still obvious when she sits down for the post-fight press conference. Katie Taylor enjoyed this one.

"This is incredible," she exclaims with a grin. "I was getting very emotional in the ring because that is how much it meant to me. I am so overwhelmed by the support there tonight. To be a two-weight world champion, a multi-weight world champion is what every fighter dreams of.

"I became an undisputed world champion a few months ago and now here I am as a two-weight world champion. It just keeps getting better and better."

The rise is unrelenting but there is no shortage of dissent either. Delfine Persoon has persisted with her demands for a rematch while Amanda Serrano has also been vocal in recent weeks. Even Saturday night's opponent, the unyielding Dominican-born Greek Linardatou, came out swinging post-fight labelling the result an injustice and Taylor a 'fake champion'.

These taunts do not trouble Taylor. In the case of Persoon or Serrano, their day will soon come with Saturday set to operate as a springboard for what looks set to be a sensational 2020.

Is she looking forward to the opportunity to shut them up?

I always say my strength is quiet confidence. I don't need to talk back. I don't need to retaliate or respond to anything. I just keep quiet and do my talking in the ring. That is the way I have always done it. Those fights are going to happen eventually.

"They are history-making fights. I can't wait for those, I was born for those big fights."

Promoter Eddie Hearn was similarly upbeat about the future. A showdown with Serrano is earmarked for Stateside but the Delfine Persoon rematch, possibly in the UK, and a super fight against welterweight world champion Cecilia Brækhus are all on the cards.

The show goes on, with Katie Taylor at the forefront.

Boxing
5 days ago
By Jonathan Byrne
Hearn Thinks 'Myself And Jake Paul' Will Help Elevate Taylor v Serrano Fight
Boxing
1 month ago
By Jonathan Byrne
'Katie Is Next' Amanda Serrano Wants Taylor Bout In MSG After Win
Boxing
4 months ago
By PJ Browne
Jake Paul Working With Eddie Hearn On Massive Katie Taylor Fight
Popular on Balls
GAA
2 days ago
By PJ Browne
Insane Drama As Late TJ Reid Goal Sends Ballyhale Into All-Ireland Final
Rugby
1 day ago
By Colman Stanley
Yesterday Was Not The First Time Wayne Barnes Sent A Player Off For Getting Lippy
Rugby
22 hours ago
By Colman Stanley
Champions Cup Predictions And Permutations For The Irish Provinces
The Rewind
2 days ago
By Jonathan Byrne
The Definitive Ranking: Deli Items Ranked From Best To Worst