Jason Quigley will be flying the flag for Ireland and Donegal in New Hampshire on Friday night.

The Quigley camp will likely be making the final preparations for the challenge of Demetrius 'Boo Boo' Andrade, but it looks like the Irishman is settling in well stateside.

On Wednesday, the WBO-NABO titleholder made a special trip to the New Hampshire Police Department to visit one of their police officers.

Serving officer Anna Martin, who hails from the Donegal town of Ballybofey, got a special 'meet and greet' with a fellow county man who just happened to be in town.

The New Hampshire Police Department is about a 20 minute walk from the SNHU arena in Manchester, New Hampshire, where Quigley will be hoping to raise the roof on Friday night.

Quigley signed Martin's Donegal flag that was proudly held for a photo opportunity. The boxer has plenty of ties to Ballybofey, having grown up not far away outside Donegal Town.

With a small section of the New Hampshire Police Department behind him, Quigley will likely be gathering more than a few more Irish descendants in support.

Speaking to us last month, he said he expects a big backing from the Irish already abroad in the States, as well as people travelling from his county.

"Thank God the restrictions were lifted - as all of Donegal had their flights booked," Quigley said on The Buildup earlier this month.

The WBO middleweight belt up for grabs has plenty of Irish history. It's something that he's been surrounded by in his home gym in Raphoe. 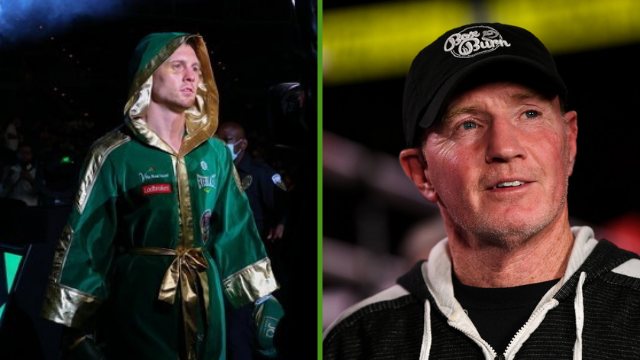