Bullshit Called As 'Gutless' Rigondeaux Quits On Stool Against Lomachenko 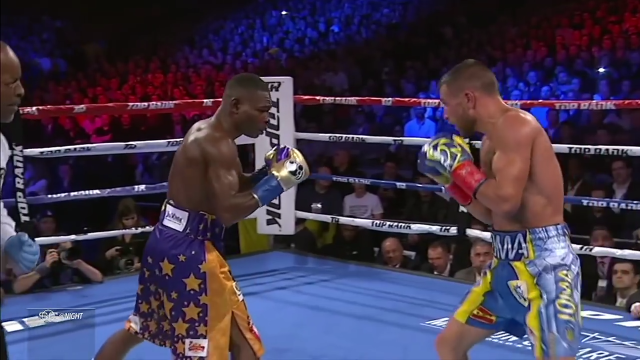 Boos rang out at The Theatre at Madison Square Garden on Saturday night as Michael Buffer announced that Guillermo Rogondeaux had quit on his stool against Vasiliy Lomachenko due to a hand injury.

As both fighters sat in their corners between the sixth and seventh rounds, Rigondeaux's camp indicated that he would not be able to continue.

There was an undoubted feeling that everyone had been short-changed, that no matter how bad the Cuban's claimed injury was, he should have shown resolve and fought on.

The bout had been billed as one of the fights of the year: it was the first time two double Olympic gold medalists had stepped into the ring in the pro ranks. Though, disappointingly, Rigondeaux looked a beaten man from around the fourth round - he was completely outclassed by his opponent.

In his post-fight interview, the 37-year-old Rigondeaux said that he had injured the top of his left hand in the second round. Considering that according to Compubox, Rigondeaux landed no more than three punches in any round, it was hard to understand how he had sustained the injury.

On BoxNation's coverage of the fight, commentator Barry Jones was especially scathing of Rigondeaux's decision to give up.

Lomachenko wasn't just winning that boxing fight, he was better than Rigondeaux and if Rigondeaux has quit because of that, it is absolutely disgusting. I wouldn't say this about any professional usually but he doesn't deserve his purse; people have paid to watch this between two supreme masters of their trade.

It's the biggest fight of your life. I can't understand how he hurt his hand when he didn't throw any punches. I can't believe I'm criticising Rigondeaux - it's almost embarrassing for someone of my level to be criticising a genius like this. It's an insult to every honest professional fighter and fan to see a guy like this with all his ability and skill quit - if that is what happened - because he's getting outboxed and outthought by a better fighter.

I can't swallow that it's the hand. If it is his hand, I apologise for that but even then, I'm not sure. No matter how bad the hand is, I'm not sure if I can excuse that in a fight of this magnitude, the biggest fight of your life.

Reaction from the boxing world was highly critical of Rigondeaux.

The biggest shame about tonight is, nobody will be talking about how dominant Lomachenko was. I hope I never see Rigo box again.

Rigondeaux has quit. Wow. That’s gutless. You think you’re the best in the world, you keep fighting and you try to make something happen. Quitting ... Wow.

I'm all for fighter safety, but this was bullshit. Rigondeaux was being outclassed and decided he didn't want to get worked over in a fight he wasn't competitive in. No appetite to see him ever again in a pro fight.

Rigondeaux's decision to quit was especially curious as throughout his career he has accused other fighters of avoiding him.

In his post-fight interview, Lomachenko gave himself a new nickname: 'NoMaschenko'. It was a reference to the famous Sugar Ray Leonard vs Robert Duran 'No Mas' fight in 1980 when Duran turned his back on Leonard during the match and quit.

Last night was the fourth fight in a row where a fighter has quit on his stool against the 29-year-old Lomachenko.

Watch: Classy Michael Conlan Makes it 5-0 And Confirms Huge Date For Next Fight