Blaring directives from Christina Linardatou's corner rattled around an already boisterous Manchester Arena throughout her bout with Katie Taylor. In contrast, Ross Enamait cut a collected figure as he watched his fighter become a two-weight world champion.

The Connecticut-based trainer heard those howls loud and clear. He was content to do the opposite.

"Lindardatou is getting frustrated, missing and their answer is to get more pumped up?" he explains to Balls.ie with a sigh. He pauses briefly, almost exasperated, before continuing.

Maybe that is not the answer. Maybe the answer is to cut the ring off, stop headhunting because you are missing. Maybe throw in some bodywork on Katie to slow her legs down. You never saw any of that.

Boxing is not just about being tough and aggressive. That is the part that a lot of people on the outside don’t realise. It is not two bullies fighting, it is a high-level skill.

When you make people miss, they get frustrated. At the same time, that is probably why they think they won. They don't know any better. I don’t mean to be disrespectful, but that is a fact. When Roger Mayweather said 'most people don’t know shit about boxing', he was on to something.

Enamait has been crucial to Taylor's transition for the amateur to the pro ranks. Under his stewardship, the Irish boxer has broken new ground for women's boxing. This is by no means the pinnacle either. A sensational 2020 looms should, as her trainer hopes, Taylor take on Amanda Serrano, a Delfine Persoon rematch and a contest with undisputed welterweight Cecilia Brækhus. 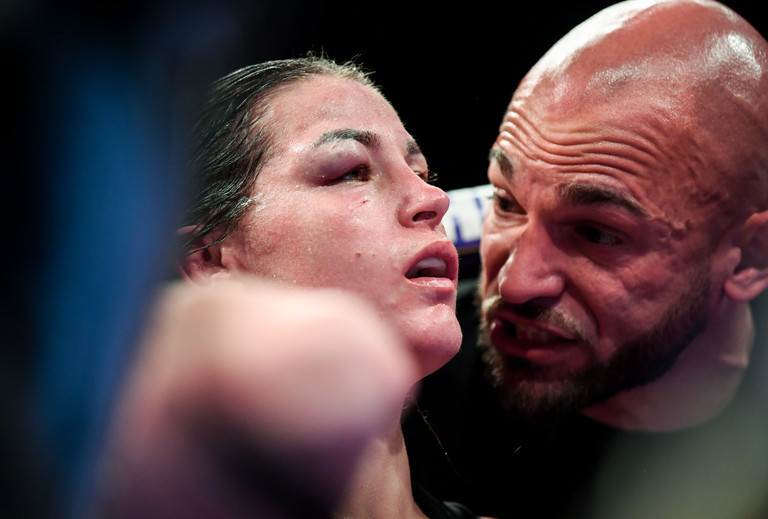 He is a coach with an encyclopedic knowledge of boxing. Over the course of a conversation, a vast array of references seamlessly crop up. Different fighters from different eras used as examples and evidence.

It is something apparent during fights as well. Enamait was not screaming but he was not silent either. Between rounds, ringside mics picked up several speedy instructions delivered into his fighter's ear. One, in particular, stands out.

His generally sober manner breaks briefly into a hearty laugh when reminded of it. Boxing's relationship to its past is like no other. Techniques, styles, careers and opinions all created based on what has come before. Much of Taylor's professional progression has come thanks to looking back.

"I was referring to a right-hand body shot. I think it was when he stopped Virgil Hill," says Enamait.

That body shot, Roy Jones looped a right around, it was the backhand loop to the ribcage. I had told her to throw it like that. I showed her that shot. You can see Katie landed that right hand two or three times.

I wanted Katie to change the angle, sometimes with an uppercut or sometimes to the body. That was a devasting shot. Roy brought the right hand around, Virgil Hill went down in agony.

His Vernon base is almost a celebration of the sport's history, albeit a modest one. Viewers of Taylor's recent documentary would have noted the old school makeup of the gym. Sledgehammers, tires, chains and ropes. 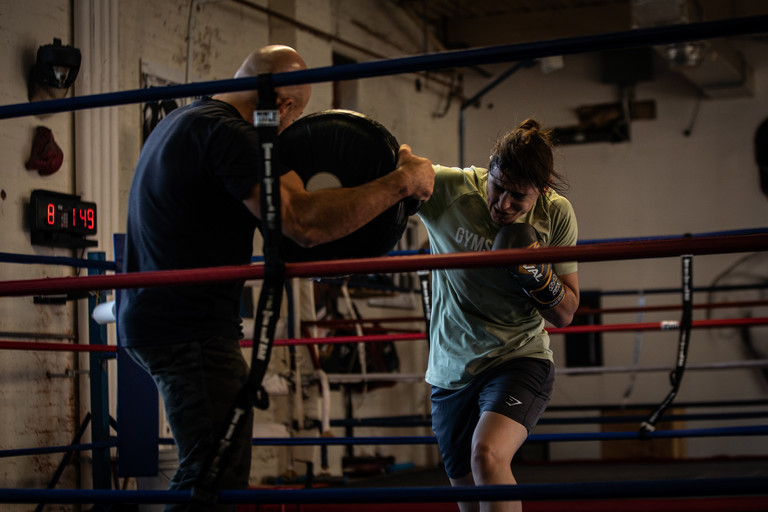 Training that reflects his thinking. There is a lot to be garnered from historical study and in Ross Enamait, Katie Taylor has an able teacher. In the buildup to her most recent fight, they watched footage of a boxer she was not familiar with. He's now one of her favourite fighters.

"I was showing her footage of Buddy McGirt against Simon Brown. Plenty of people know Buddy McGirt as a great trainer but he was a very silky fighter too. He could box your ass off. Going into that fight Simon Brown was a huge welterweight, a big strong puncher.

"I like to look at fights where there are similarities as far as what we are going to do to someone.

"It is so important to be educated on great fighters who came before. We think we know so much now. Everyone talks about science and all these breakthroughs but boxing is not a new sport. We can all learn from the guys who came before.

"If Roberto Durán didn’t need it, we don’t need it either. I think some of these guys get too fancy and try to ignore the past. Hagler fought Hearns in 1985. Does anyone really think today’s fighters are better conditioned than those guys? No way. We haven’t advanced that much." 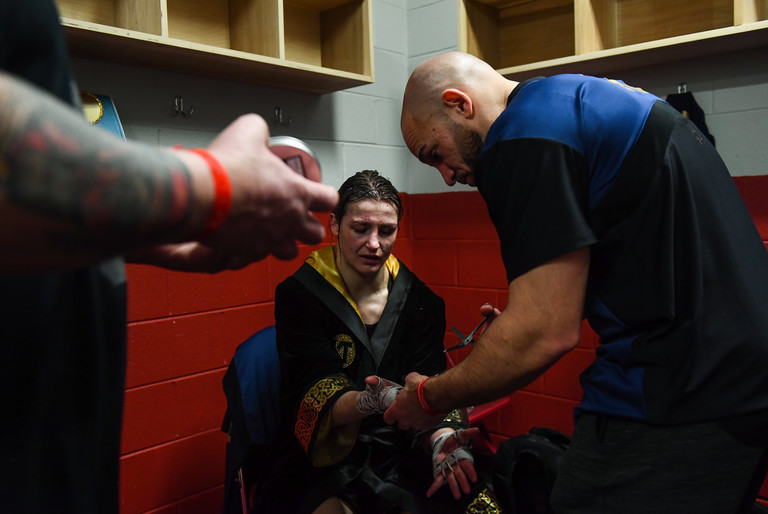 There has been persistent soundtrack played in places during Taylor's career that projects speculation. Every fight framed by chatter about depth or longevity. That is white noise to those within the camp and it would be pointless practice to dwell on it.

What protrudes for Enamait is Taylor's true talent. She does not demonstrate one style but several. Manchester saw complete control of calculated feints and flawless combinations. Brooklyn brought front foot strikes and relentless pressure. The latest Madison Square Garden venture was a mix of it all, good and bad. The furor over that result means it remains a score to be settled.

For her trainer, should that Persoon rematch go ahead, the Belgian will face an improved fighter.

"I would say she is getting better. Katie has a vast amateur background obviously but every fight she has, she is still learning. There are little things subtle things she is learning to do in terms of avoiding damage or stepping inside.

"The thing is, she is becoming more versed. People might miss that. Against Volante, she fought static. She was a strong fighter but a bit slower and didn't have great hand speed. In those circumstances sometimes the safest place is on the inside.

"This fight she fought on the outside. Katie Taylor has more options. Lindartrou had one option. She wanted to bang out inside. When that wasn’t working she didn’t have a plan B.

"Every fight you have, you are learning and improving. After every fight, you can sit down and say here are the couple of things we need to do better. You have a chance to improve on the past." 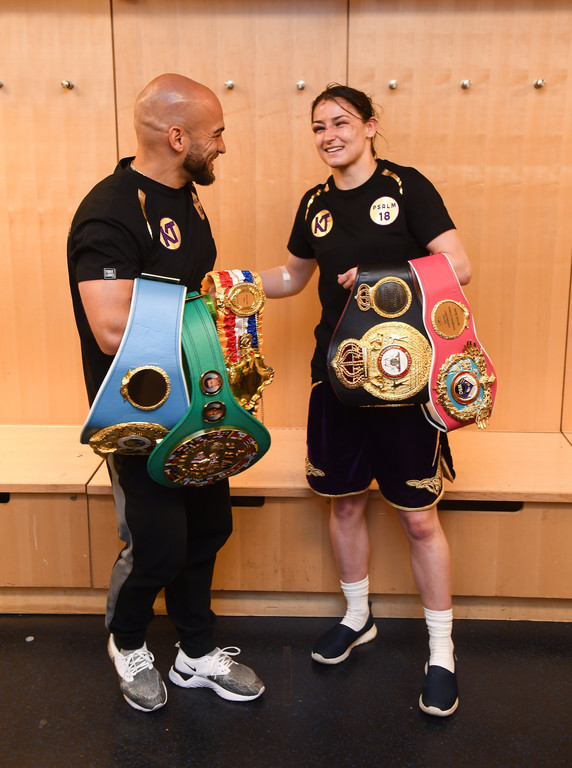 Whether it be her career or calling, ultimately perception is everything. It is about what you can see and what you are looking for.

"It is difficult to judge, even for judges. I might be appreciating one fighter making another fighter miss. Someone else might appreciate pressure, there is not a definitive standard.

"I think sometimes pressure might be scored more favourably than it should be. If it is not effective, if you are swinging and missing like Lindatrou, to me I don’t score that.

"I’m more the Willie Pep school. He won a round without throwing a punch. It depends on how you mix it, Katie can mix it every way. Not everyone sees that.

"You should appreciate pure boxing."

SEE ALSO: 'The Fights Are Going To Happen. Eventually, I Am Going To Shut Them Up'