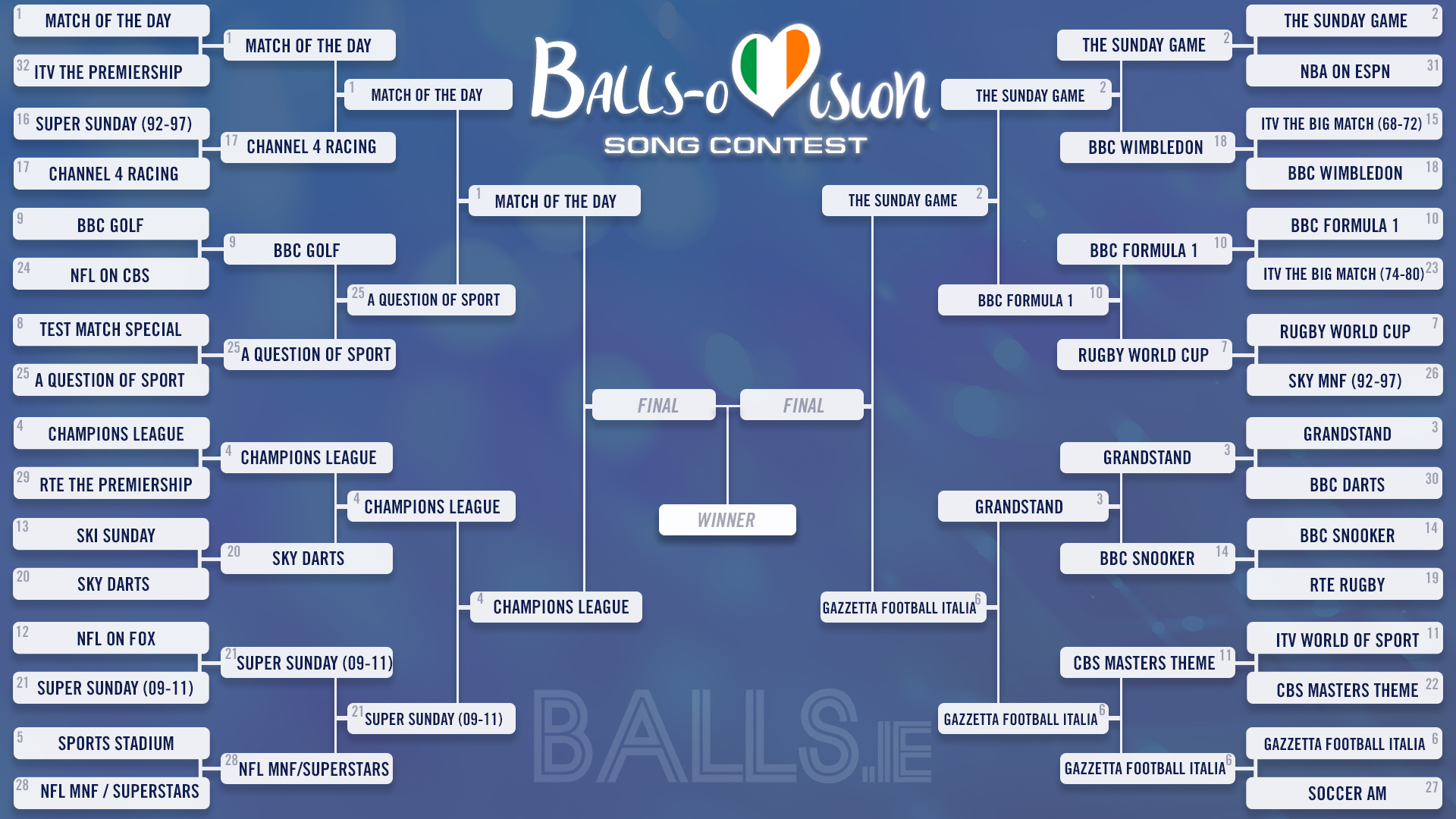 We've reached the semi finals! We got an unbelievable amount of votes over the last 24 hours as we determined the final 4, with four pretty one sided quarter finals.

As predicted, the biggest threat to the top four seeds was Gazzetta Football Italia, who put BBC's legendary Grandstand theme on its arse, and advanced to the semi final.

We're not sure what you were thinking to be honest, but that's democracy for you. We'll learn to live with it.

Gazzetta now faces The Sunday Game, who had a very comfortable win over BBC's Formula 1, who were by far the toughest challengers in the remaining three ties.

Both Match of the Day and The Champions League have pulverised all that has been put in front of them in this competition so far, and they did it again in this round, both getting a ridiculous 91% of the vote.

So, here we go. Four songs left. Who will make the final? For the first time in the competition, we genuinely don't have a clue.

Have a listen to the songs to remind yourselves of their glory, and get voting! 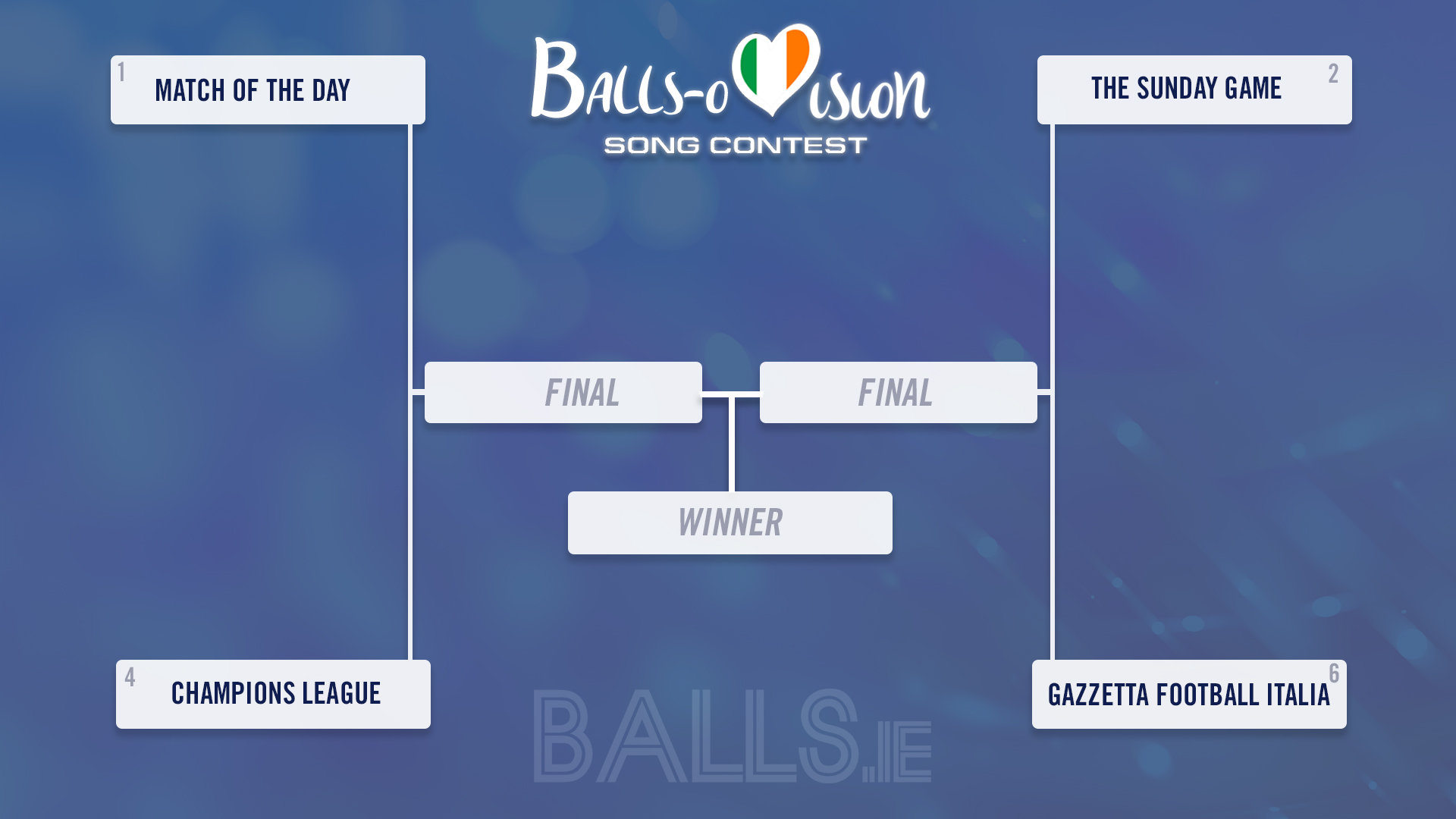 This side of the draw offers up the tie of the tournament - the irresistible force meets the immovable object. Both tunes have been so superior to everything put in front of them. Match of the Day has the tradition, and the number one seed, but that Champions League music is just so powerful. We can't call it.

Two great theme songs. The Sunday Game is undoubtedly better music, but GFI does what any great theme should, and fills you with excitement and nostalgia, putting you right back in front of the TV as a child.

The Sunday Game though shares this virtue entirely, so maybe the better tune might just shade it. We write off Gazzetta at our peril though...

So there you go. We're down to the best four sport's TV theme tunes of all time.

Get voting, and if your favourite is losing, tell your friends to vote (or if you have no friends, just open an incognito window and fill your boots).

The Rewind
4 months ago
By Sean Meehan
Quiz - Do You Know The Lyrics To 'Do They Know It's Christmas?'
The Rewind
8 months ago
By Jonathan Browne
All The Info On Copper Face Jacks Reopening
Football
11 months ago
By Jonathan Byrne
"C'mon The Town!" Vito From The Sopranos Is Dundalk's Most Unlikely Super Fan
Popular on Balls
Rugby
2 days ago
By Colman Stanley
'That Pace, That Intensity, That Organisation' All Black Legend Has High Praise For Leinster
GAA
2 days ago
By PJ Browne
Cusack Has Little Sympathy For Gearoid Hegarty After Red Card
Football
16 hours ago
By Colman Stanley
Wagatha Christie Trial Sheds New Light On England's Euro 2016 Disaster
GAA
22 hours ago
By PJ Browne
GAA President Explains Why Tailteann Cup Won't Be All-Ireland Curtain Raiser