To celebrate the centenary of the #GreatestLeagueInThe World, we're resharing some of our favourite pieces on the League of Ireland

As of writing, no player has traveled to the World Cup while playing his football in the League of Ireland. That stat won't surprise anybody but there have been 30 players who have been in World Cup squads who have played LOI football at some stage of their career.  23 of them have represented countries other than the Republic of Ireland.

Scottish born striker McIlvenny had given up on football by the time he moved to the US to take up an industrial job. He soon began playing part time and was selected for the 1950 World Cup squad where the US would stun England and beat them 1-0. He used that to springboard a move to Manchester United but struggled to make the breakthrough. He was recommended to Waterford in 1953 by Johnny Carey and went on to spend 4 years there, representing the league on several occasions.

Newry-born McParland started his career with Dundalk before moving to Aston Villa in 1953. McParland was one of the stars of the 1958 World Cup scoring 5 goals. You can read more about his time in Ireland, and his career as a whole, on the excellent Dundalk Who's Who site. Sammy Chapman was also in that NI squad. He had signed for Shamrock Rovers in 1956 but didn't play for them before moving over.

One of the all-time greats in German football, Seeler played in 4 World Cups and spent nearly all of his career with Hamburg before retiring in 1972. 6 years later, Seeler and his ex-Hamburg mate Franz-Josef Hönig turned out for Cork Celtic. Seeler claimed he didn't know it was a league game and that he was doing a favour for adidas.

Right back Parker played once in the 1958 World Cup and never made another appearance for his country. He ended his career with a spell with Drumcondra in 1970 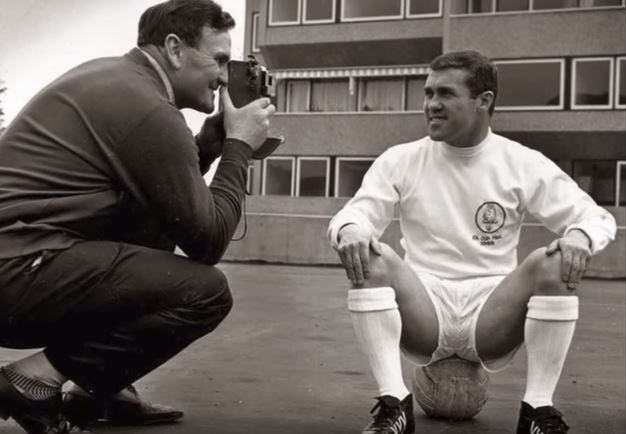 Bobby Collins had a long and successful career with Celtic, Everton and Leeds. He was voted Footballer of the Year in England in 1965. 8 years later he signed for Shamrock Rovers making 13 appearances. 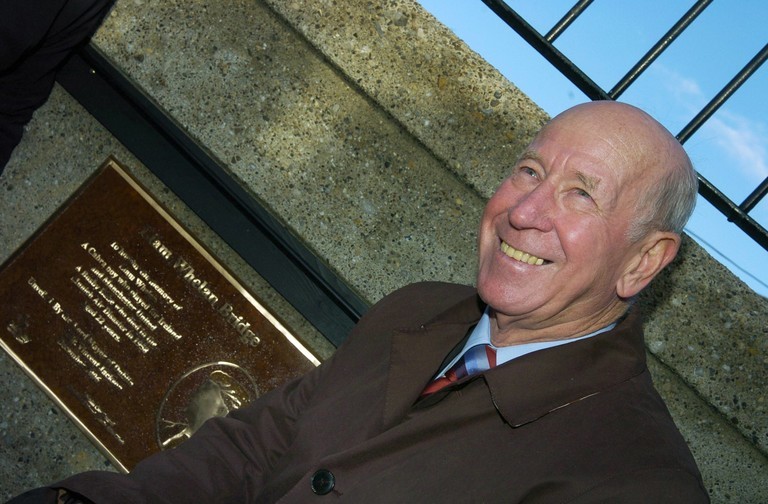 Universally regarded as one of the best English footballers of all time, Charlton made his World Cup debut in 1958 but is, of course, best remembered for winning the trophy in 1966. He played a couple of games for Waterford in 1976.

The hat-trick scoring hero for England had a short spell with Cork Celtic in 1976. He scored on his debut as Celtic beat Shamrock Rovers 3-1 in the FAI Cup.

As with Charlton and Hurst, the keeper was asked to play as a guest in the league by St Patrick's Athletic in 1977. You can read all about his clean sheet in their win over rivals Shamrock Rovers here.

The 4th member of England's world cup winning squad to play in Ireland was Ian Callaghan who played twice for the now defunct Cork United in 1981.

Despite being knocked out in the group stages, Harvey had a great time at the 1974 World Cup keeping clean sheets against Zaire and Brazil. He appeared briefly for Drogheda United in 1981 as he waited for the 1981 NASL season to kick off with Vancouver Whitecaps (where he played with several Irishman including Liam Buckley, Dave Henderson, and Pierce O'Leary under the management of Johnny Giles).

A legend for Celtic where he won 9 league titles and the European Cup in 1967. He didn't actually play for Scotland in the 1974 World Cup and 3 years later he spent 2 months with Shelbourne in the League of Ireland.

We might use legend a little bit much in this article but that's how Leeds fans describe Lorimer. His LOI stint cam about because he was playing in the summer with Vancouver Whitecaps in the NASL under Johnny Giles who wanted his players to play winter football too.. Lorimer played 3 times for UCD in 1983. He's another World Cup scorer, netting against Zaire.

McDermott was at the tail end of his glittering career when he went to the 1982 World Cup in Spain. The 3 time European Cup winner wouldn't play any part. In Cork City's first season in the league, he was asked to play for them by the manager Tony Allen. Despite not knowing where Cork was, McDermott made 11 appearances and seemed to enjoy his time in Cork.

The West Ham legend only played 30 minutes of football in the World Cup despite nearly 50 caps. In December 1985 he made 2 appearances for Cork City (losing both). Brooking said he played because a friend asked him to. 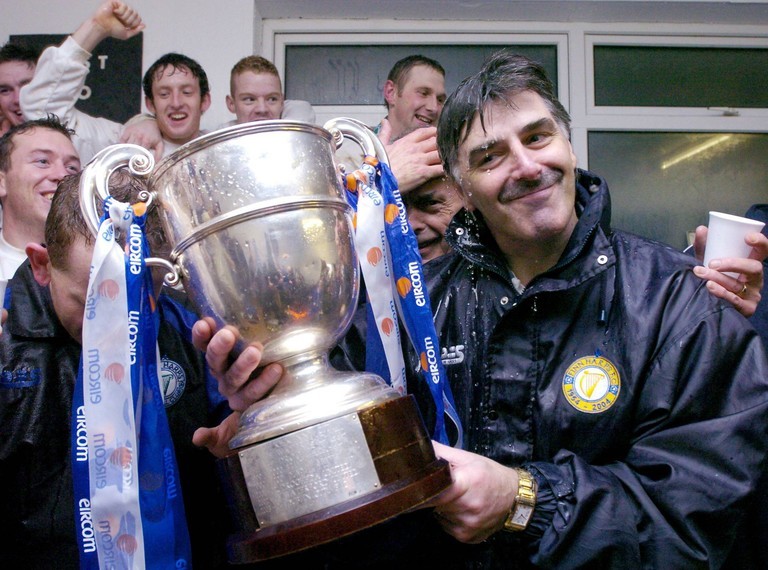 Healy became the first player since 1958 to play in the World Cup after playing in the League of Ireland. He started his career with Sligo Rovers in 1974 and also played the 77/78 season with Finn Harps. He made his only World Cup appearance as a sub for Martin O'Neill. Healy would go on to play for Derry City in the LOI in the late 1980s too.

Hamilton became a hero to Ulsterman in 1982 for his part in their terrific run in the Cup. He scored twice in a 2-2 draw with Austria. After playing in Mexico 1986, he was appointed player manager of Limerick City in 1987. He spent 2 years there before moving on. He also had a sort spell with Sligo Rovers#

Campbell's first start for NI was against Brazil in Mexico as a 21 year old. He was still only 25 when he made his LOI debut for Derry City. After only 5 games he had moved on to Shamrock Rovers and stayed there until the end of the 1991/92 season.

Playing summer football with Vancouver Whitecaps, David Norman moved to Ireland with 3 Canadian team mates in 1980 to find some winter football. He ended making nearly 50 appearances before leaving UCD for good in 1982. Shortly after playing all 3 games for Canada in 1986, he was banned from football for his part in match fixing.

Among the many clubs that Steve Archibald has played for include Tottenham Hotspur, Barcelona and, eh, Home Farm Everton (as they were known then). He made one appearance in 1996 as he approached 40.

Don't worry, we won't introduce you to the Republic of Ireland lads. We'll just mention their LOI careers. Staunton's is the shortest as he didn't actually play in the league but he did play a President's Cup game for Dundalk, and all competitions count.

Another who sneaks in. One appearance for Bohemians in 1974-75 before heading to (non-LOI at the time) UCD.

Son of St Pats legend Ronnie Snr, Whelan started his career with Home Farm in 1977 and spent 2 seasons there before leaving for Liverpool.

The Black Pearl of Inchicore spent one season at St Patrick's Athletic and was voted the Player of the Year for the league by his fellow pros in the PFAI. He didn't even last that full season with Pats. 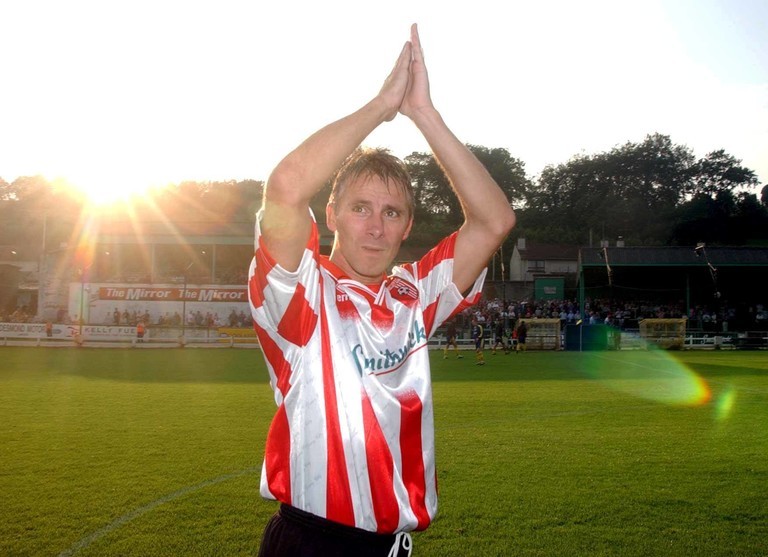 The first man to play in the World Cup for ROI before playing in the league (his one appearance was that 0-0 draw with Norway in 1994). Kelly turned out for Derry City in 2002 and helped them win the FAI Cup in his last ever playing appearance.

Keano's stay with Cobh Ramblers in the first division of the LOI only lasted one season. We have all you need to know on that 1989/90 season with the Cork club here. 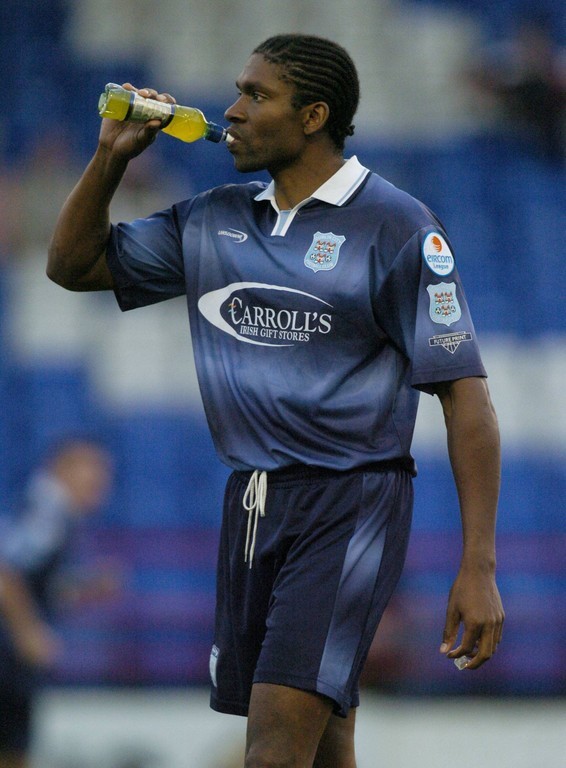 The English-born striker was called up by the Super Eagles for the first time in 1994 but didn't make an appearance at USA '94. 10 years later he finished his career under Roddy Collins at Dublin City, failing to score in his 3 months here. 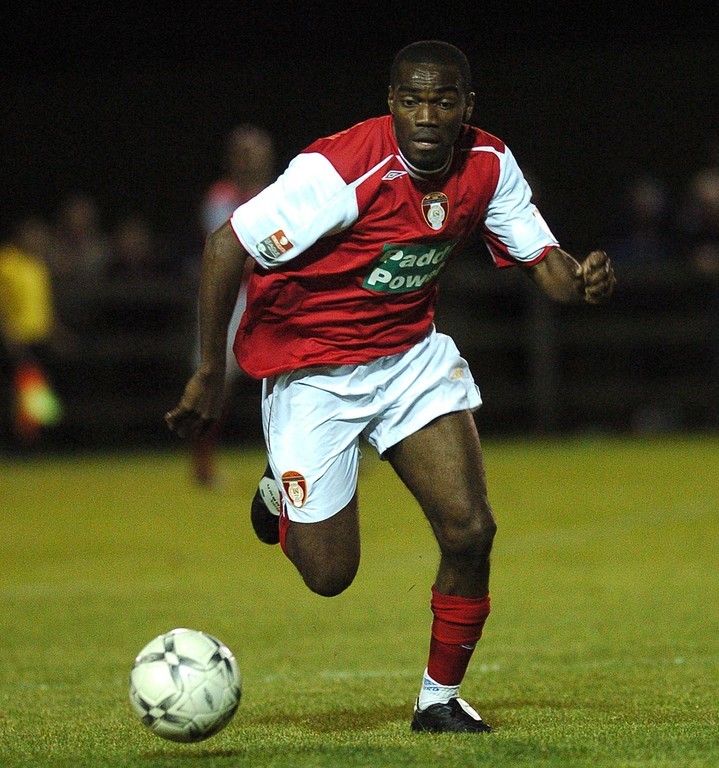 N'do is a rare phenomenon in this list as he's more famous for his exploits in the league than anything he's done elsewhere. That includes playing every game in the 1998 World Cup in France. He wasn't used in 2002 but within 9 months he had signed for St Patrick's Athletic. N'do had great success in the league winning titles with Shelbourne, Bohemians and Sligo Rovers (where he spent the bulk of his time here) and also had loan spells with Shamrock Rovers and Limerick.

Duff was at the height of his powers in 2002 in the Irish team that people still argue about what might have been. He was not at that level when he signed for Shamrock Rovers in the summer of 2015. He played 10 games for Rovers before moving into their coaching set up.

The popular defender spent 4 years here playing for Bohemians, Shelbourne and Longford Town before trying his luck in the USA. He was rewarded by his selection for T&T's first ever World Cup game against Sweden in 2006. Unfortunately John was sent off for a second booking after 46 minutes. They'd go on to draw 0-0 but lost their next two games. After serving a suspension, John suffered an injury in the last game too. 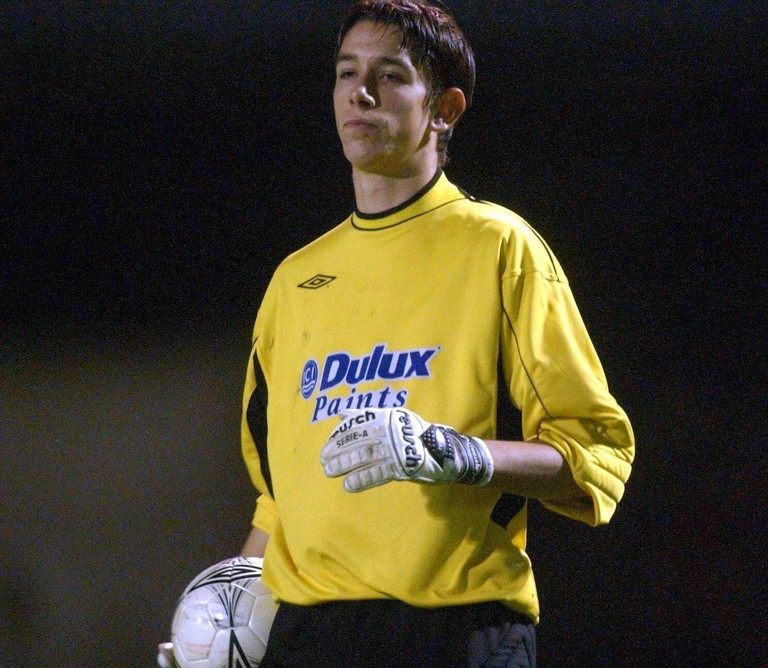 After a gap, the LOI has some interest in the World Cup again. Brad Jones famously made his LOI debut as a 19 year old on loan to Shelbourne in a 6-4 win over Bohs in 2001. He didn't stay too long with Shels but has gone on to play for Liverpool and Feyernoord and in 2018 travelled to his first World Cup.

Meredith signed a short term deal with Sligo Rovers as a 19 year old in 2007 and ended the season playing 4 times for the Bit O' Red. He's slowly moved up the leagues in England since then and was almost ever-present for Millwall last year in the Championship. He made his Aussie debut in 2015 but has been pretty much ignored until this year but he travels to Russia with the squad.

That's the lot. There's been a few near misses including Colin Healy, Dominic Iorfa and others who have played friendlies for LOI sides. We've also had players like Fay Coyle play for Derry City in the Irish League and play in the World Cup but we think we have the list above right. We think we have every player who's played competitively for a League of Ireland club and who has made a World Cup finals squad.

Football
5 hours ago
By PJ Browne
St Pat's Teenager Reportedly Set For Serie A Move
Football
1 day ago
By PJ Browne
Bohs Will Have Bob Marley-Themed Away Jersey For 2022
Football
2 weeks ago
By Gary Connaughton
Roberto Lopes Nearly Missed International Call-Up After Ignoring LinkedIn Message
Popular on Balls
GAA
2 days ago
By PJ Browne
Insane Drama As Late TJ Reid Goal Sends Ballyhale Into All-Ireland Final
Rugby
1 day ago
By Colman Stanley
Yesterday Was Not The First Time Wayne Barnes Sent A Player Off For Getting Lippy
Rugby
22 hours ago
By Colman Stanley
Champions Cup Predictions And Permutations For The Irish Provinces
The Rewind
2 days ago
By Jonathan Byrne
The Definitive Ranking: Deli Items Ranked From Best To Worst