A Personal Account Of Possibly The Best European Championships Of All

Euro 2000 is a strange tournament to look back on. Earlier this year, following the passing of Johann Cryuff, people always said that the Netherlands should have won the 1974 and 1978 World Cups. That's as maybe – but the tournament they really threw away was Euro 2000 which they co-hosted with Belgium.

Holland won their group, including a 3-2 victory over eventual winners France, and absolutely demolished a decent Yugoslavia team in the quarter-finals 6-1. Patrick Kluivert and Marc Overmars ran rampant, the former scoring a hat-trick and the latter bagging a brace.

But the Dutch did what the Dutch do – and lost to Italy in a ludicrous semi-final. Italy were reduced to ten men after 31 minutes when Gianluca Zambrotta got sent off. The Dutch missed two penalties in normal time (which miraculously finished 0-0) and then missed a further three in the penalty shootout which they lost 3-1. It was ridiculous.

Dennis Bergkamp admitted as much in his book, Stillness and Steel.

“In 2000 with the European Championship: we should have beaten Italy easily and got to the final. I think our game didn't really suit France. They preferred to be the better technical team – but we had the edge on them.”

Maybe it was the Mayoman in me seeing Mayomen in them (sure what was Marc Overmars but a nippier David Nestor?) but Holland were the team I took out of Euro 2000.

And of course England, with all their brittle bombast. Ireland didn't qualify after yet another play-off defeat (this time against Turkey) so England were the main attraction. As it happened, similarly to my colleague PJ's account of Euro 1996, an 'English' neighbour had a large part to play in my tournament too.

Mick McDonagh had just moved into the house behind my cousins' place. We watched most of the games at their house because they had the English channels. We just had Bog 1 and Bog 2 and patchy TV3. These ministers giving out about rural broadband now had little to say back then.

Mick's brother Seamus is the current Ireland goalkeeping coach and earned 25 caps for Ireland. He told us all about him and his exploits but it mattered not a whit to us. We were beligerent 15 and 16 year olds.

We heard his Gillingham accent and he became 'English Mick'. He had far more valid claims to the Irish team than us – but this was the year 2000 and his claims that his brother played for Ireland back in the days before colour was invented meant little. Did he not know my father was on nodding terms with Steve Staunton's dad?

How could his brother, whoever he was, compete with that? How could you be Irish with an accent like his? So teasing Mick was the pinnacle of our ambition.

He seemed English and that was enough for us.

Their progress was so inexorably English. They raced into a 2-0 lead against Portugal before conceding three to lose the game. Then an Alan Shearer header gave them victory over the Germans (who were decidedly un-German in this tournament - led by Carsten Janker and dumped out at the group stage) so the swagger was back.

But then Phil Neville conceded a late penalty against Romania to dump England so it was poor old Mick that got the brunt of it even though he was as happy as we were.

We had the Dutch after that. Until we didn't. The Italians went on to meet the all-conquering French in the final. A golden goal penalty from Zinedine Zidane had seen his side past Portugal - who were the ballyhooed "dark horses" of the tournament. (Much like Belgium this year, or even Austria. There weren't as many hipster bloggers back then.)

France went on to score another golden goal in the final - David Trezeguet lashing in a famous winner in extra-time to see the French side to consecutive titles following their win at home in the 1998 World Cup. Zidane was outstanding and in many ways it was a superior French team that won the Euros than the side who won the World Cup. (Thierry Henry and Trezeguet were a slight upgrade on Stephane Guivarc'h).

There was just a nagging feeling that we'd been denied a classic. Holland should have been there. And many would argue that Portugal should have met the Dutch in the final. It was the culmination of their so-called 'Golden Generation' of Luis Figo, Rui Costa, Vitor Baia and the rest. 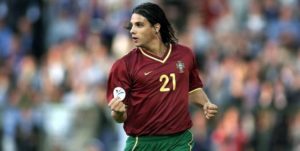 I never took to them. I had a girlfriend at the time and she was hot for Nuno Gomes and lukewarm on me. At best. She watched France beat Portugal in that semi-final. English Mick played a blinder. He told her that Nuno Gomes was a woeful womaniser and he'd left his wife and kids in Lisbon for a young wan.

I dropped the "English" in his name after that.

Read more: Why Euro 92 Was The Best European Championships Ever

Read more: Euro 96: When I Learned To Love English Misfortune

Football
9 months ago
By Balls Team
How Ireland Risked Expulsion From The European Championships Over Yugoslavian Quarrel
Football
3 years ago
By Conor Neville
'Without A Shadow Of A Doubt' The Most Hostile Atmosphere The Irish Team Have Ever Faced...
Previous Next