The blue ribbon event in the Irish footballing calendar is taking place at the Aviva Stadium this afternoon, but one major talking point emerged before the game.

In typical cup final fashion, there were plenty of pre-match formalities to get out of the way before Dundalk and Shamrock Rovers got the action underway on the pitch. One of those was the national anthem, where Rovers goalkeeper Alan Mannus stood out from the rest of the players.

As is customary, 21 of the 22 players turned to face the Irish flag during the playing of Amhrán na bhFiann. Mannus was the only exception. 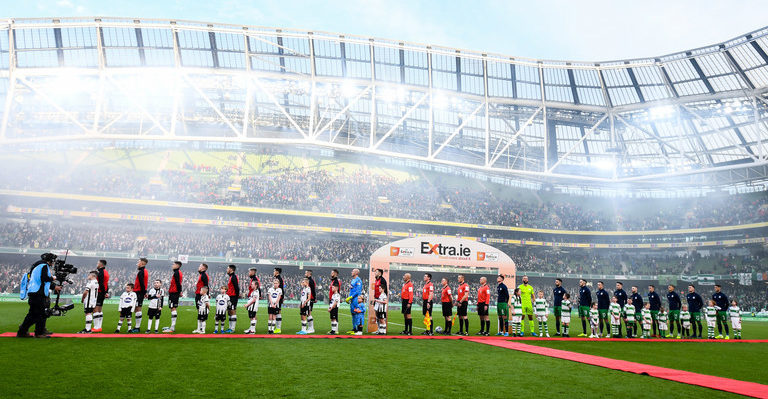 Mannus is a Northern Ireland international, having started his career at Linfield. He has nine caps for Northern Ireland, and returned to Shamrock Rovers in 2018 after a seven year spell at St Johnstone in Scotland.

Many people were quick to condemn the goalkeeper for his reaction to the national anthem.

Shout out to Alan Mannus disrespecting his national flag 😝🎣 #FAICupFinal

Thought Mannus would have insisted on Irelands Call being played........#FAICUP

Manus 🔶🔶 as staunch as fuck. Only one who wouldn’t turn to face to flags during the anthem. #SRFC must be proud of that. #FAICupFinal

While this is a long standing tradition, Mannus' wishes not to adhere to it must be respected. It is a similar situation to the one James McClean finds himself in during poppy season in England, where Irish fans usually stand up for his right not to wear one.

Lads, Mannus can turn if he wants. The same with the McClean poppy situation. We can all agree we don't like him because he's Rovers though!

Football
4 months ago
By Sean Meehan
30 Years On, The 1990 FAI Cup Final Remains One Of Irish Football's Great Stories
6

Football
4 months ago
By Sean Meehan
30 Years On, The 1990 FAI Cup Final Remains One Of Irish Football's Great Stories
Football
10 months ago
By Michael McCarthy
"I've Just Felt Nothing But Low" - Alan Mannus' Cup Win Ruined By Anthem Controversy
Football
10 months ago
By Gary Connaughton
'It Takes Us To The Next Level' - Bradley Ready For More After FAI Cup Success
Popular on Balls
Football
11 hours ago
By Paul Moore
The Legendary Paul McGrath Is Front And Center In A Show About His Life This Week
5