Troy Parrott Is Ready, And He Should Get The Chance To Prove It

It is a moment we have all been waiting for, but it has come much sooner than most of us would have expected. After a few stunning performances in pre-season, the clamour has started for Troy Parrott to become a fixture in the Tottenham first team squad.

For those who have been closely following his career, the talent he displayed in his limited time on the pitch would have come as no surprise. But to see him shine in such a manner, having only turned 17-years old in March, is phenomenal.

Aware this is only pre-season, but #thfc striker Troy Parrott looks totally at home at this level. #ICC2019

A player of his age making a consistent first team breakthrough at such a big club is becoming increasingly rare in the modern game. But can Parrott break that mould?

In many senses, Troy Parrott is the type of versatile forward player currently lacking in the Spurs squad. He is primarily striker, but possesses traits that make him equally comfortable in various positions around the pitch. He can drop deep, or work the channels.

As well as a deadly finishing ability, his dribbling and passing ensure he can be the orchestrator as the well as providing the final touch.

This pass is the perfect example of what he can do from a deeper position. Parrott shows fantastic composure to ride the tackle, before looking up and picking out a first time ball over the top (full video available here).

He is also capable of launching a counterattack at the drop of a hat.

His dribbling ability can be vital in easing pressure on his team in their own half, and he also has a propensity to draw a high number of fouls from the opposition.

Below, you can see how he can quickly get into dangerous positions with the ball at his feet.

That is before we even mention his ability once he gets into the final third.

Troy Parrott is nothing less than a goal machine. Last season, in 30 appearances for the Spurs U18 and U23 sides, he notched 20 goals and five assists.

His ability from set-pieces is one of his biggest assets. He has scored a number of free-kicks both for Spurs and Ireland, including this effort against Swansea last season.

When he gets into a goal scoring position, he is capable of pulling an absolute worldy out of his bag of tricks.

How will all of this of this translate to the first team? It can be difficult to judge based on pre-season, but the early signs are good.

While he has yet to get his name on the scoresheet, he has displayed all of the other intangibles that make him such a tantalising prospect. He looked incredibly comfortable in the game against Manchester United yesterday.

Let's take a look at him making an absolute mug of Chris Smalling one more time.

Troy Parrott is so smooth with it. 👀 pic.twitter.com/yNy04NamTX

If there were doubts about his ability to step up to the top level, his performances against Manchester United and Juventus have dispelled any such notions.

So what is blocking his path to consistent first team minutes?

Firstly, age. Parrott only turned 17 a few months back, and it is rare for a player so young to make an impact in the first team. The step up would also be incredibly taxing on his slight frame, especially if he played large minutes.

With Spurs under pressure to win a trophy, Pochettino may also be hesitant to give the youngster an extended run in the side. Then again, he may not have much of a choice.

Despite breaking their transfer record with the signing of Tanguy Dembele, Spurs have been fairly quiet in the transfer market once again this summer. As usually seems to be the case, they are a couple of injuries away from a real crisis.

It's not as if they have the most durable of players in forward areas. Harry Kane always seem to miss time, and with Fernando Llorente unlikely to return next season, there is a spot in the squad as a backup striker. Heung-Min Son can fill in, as can Lucas Moura, but they will be needed in other areas.

There is no expectation that they will bring in another signing in this position.

If Parrott can continue to impress in training and over the next couple of weeks, there is a real possibility that he will be a fixture in match day squads when the Premier League comes around.

What would that mean for his international prospects? He is all but assured of a place in the U21 squad, but could he aim even higher? 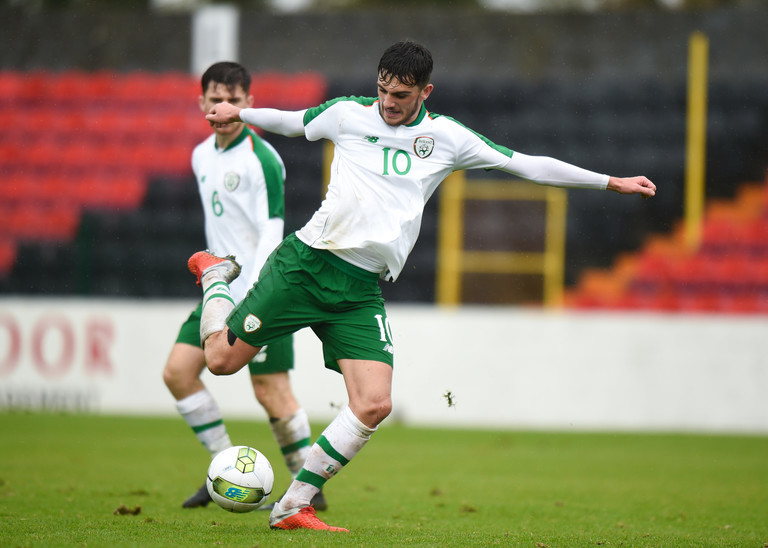 Mick McCarthy hinted yesterday that he could make his international debut in the friendly against Bulgaria in September:

A friendly is a friendly and I do have some ideas on that but my concern is Switzerland.

But if Troy Parrott is in and around the (Spurs) first team he has every chance of being involved in that, for sure.

If he is playing in the Tottenham team I'll use him for the first team squad...

Whether he starts for Tottenham on August 10 (when the Premier League begins), who knows but it’s great for his development and progression.

And if he’s playing in the first game of the season, if he’s starting and playing for Spurs, he’ll have to be a shoo-in for the squad.

Should he be in the squad anyway?

Ireland have a serious lack of quality in forward areas at the moment, with none of our current options (with the possible exception of Shane Long) proven at international level. Getting Parrott into the squad as soon as possible certainly has his benefits, and the idea of him contributing for Ireland inside the next 12 months is an exciting one.

We have been slow to incorporate youngsters in the past, and it has cost us (we promised we wouldn't mention Declan Rice). Stephen Kenny will certainly be aiming to integrate our brightest prospects at the earliest possible juncture, but you get the feeling Mick McCarthy would be reluctant to do the same.

There is a real possibility we could see Troy Parrott in the Premier League this season. He seems ready, even if only for limited minutes.

It is now up to Mauricio Pochettino. He is open to playing young players, though often through necessity rather than choice.

Hopefully the Irish youngster will benefit from this dynamic.

SEE ALSO: What If: Cristiano Ronaldo Signed For Arsenal Over Manchester United In 2003?