In Pictures: The Time Ronaldinho And Barca Graced The Brandywell

On August 12th 2003, a star-studded Barcelona team arrived at the Brandywell to take on Derry City in a pre-season friendly.

It was a game organised by politician and Derry City fan, John Hume. Earlier in the year, Hume had been granted the freedom of Barcelona. His first thought was to raise the possibility of a friendly with Barca president Joan Gaspart.

"I was told I would receive the freedom of Barcelona and I immediately worked on getting their team to Derry," Hume is quoted as saying at the time by UEFA.com.

Derry chairman Jim Roddy said the game could have been held shortly after it was agreed between Gaspart and Hume but the Barca team would not have been a full strength one.

Instead, they waited until August when a squad featuring new signing Ronaldinho along with Rafa Marquez, Patrick Kluivert, Javier Saviola, Marc Overmars, Carles Puyol and a teenage Andres Iniesta could make the trip. Frank Rijkaard had just taken over as manager.

In front of 10,000 packed into the Brandywell, Barcelona entertained and won the game 5-0.

Their first two goals came via headers from corners (when in Rome). Marquez and Patrick Andersson applied the finishes past goalkeeper Neil Bennett.

Derry legend Peter Hutton was said to have played "like a man possessed" by the Irish Times. He had two genuine chances to score in the first half but squandered both and also set up another opportunity for Gary Beckett seven minutes following the break.

Ronaldinho, who had arrived at Barcelona three weeks earlier in a €30 million deal from PSG, rattled the bar from a free-kick after entering the game as a second half substitute.

Gerard Lopez added a third for the visiting side 12 minutes into the second half after Marc Overmars's ball into the box evaded the Derry defence.

Barca's fourth had a real South American flavour with Ronaldinho providing a perfect long ball over the top of the Derry backline for Saviola which allowed the Argentine to easily lob the ball over Bennett.

The final goal of the game came from the man everyone was there to see. Regarded as one of the world's best players at the time, Ronaldinho raced through the middle of a Derry defence, which had kindly provided him with gaps he did not need, before rounding substitute keeper Mark Speers. The goal was greeted with cheers from the capacity crowd.

It was a game played just two days before Derry's UEFA Cup first leg qualifying round game in Cyprus against Apoel Nicosia, one they lost 2-1.

"Ideally, I would not have played a match tonight but you do not turn down a chance to play Barcelona," Derry manager Dermot Keely told BBC.

"We have been part of a wonderful occasion. It has been fantastic for the fans and the city." 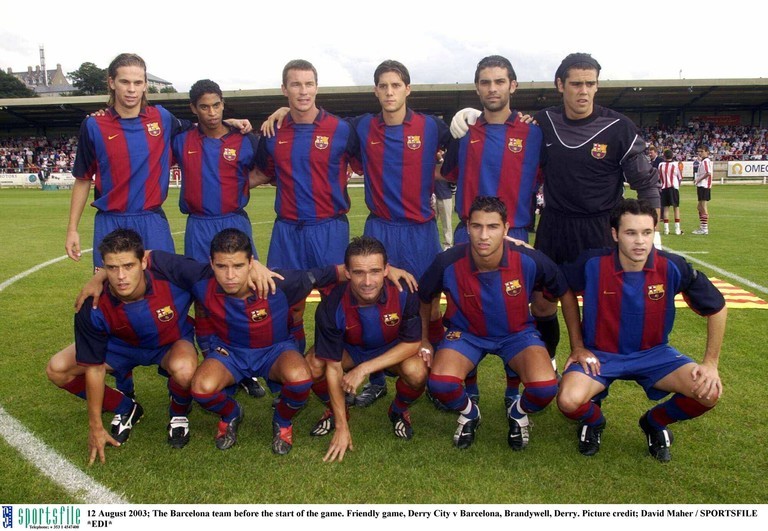 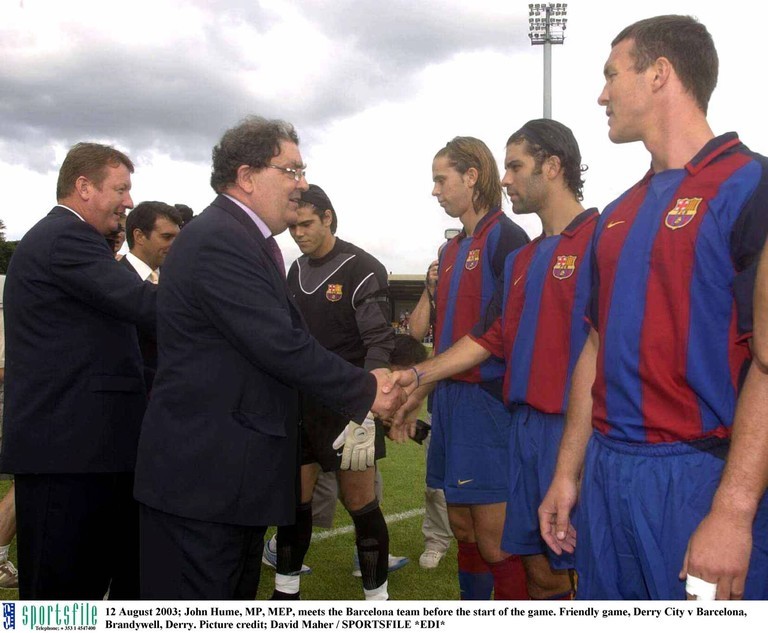 Ronaldinho waves to the crowd before the start of the game 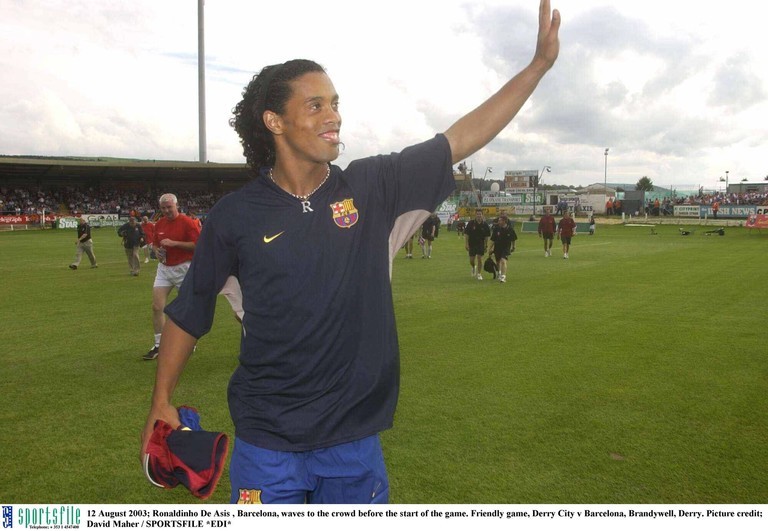 Ronaldinho gets a local welcome 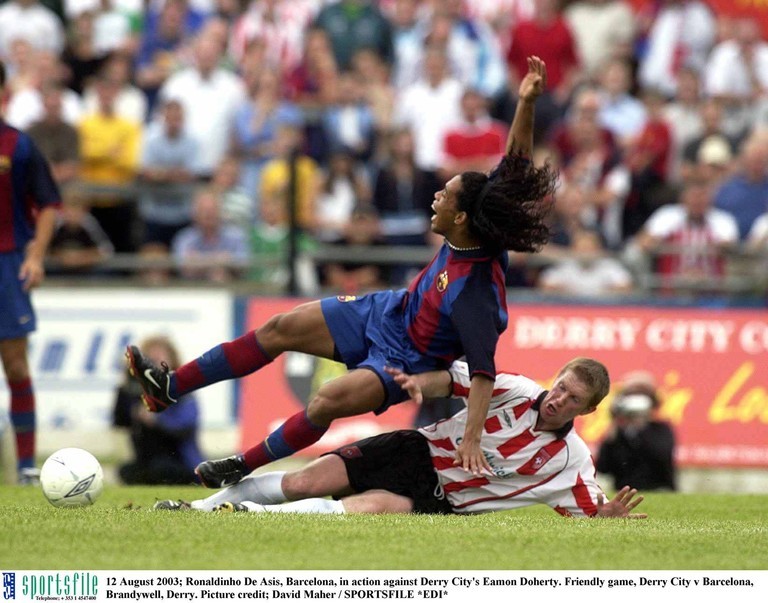 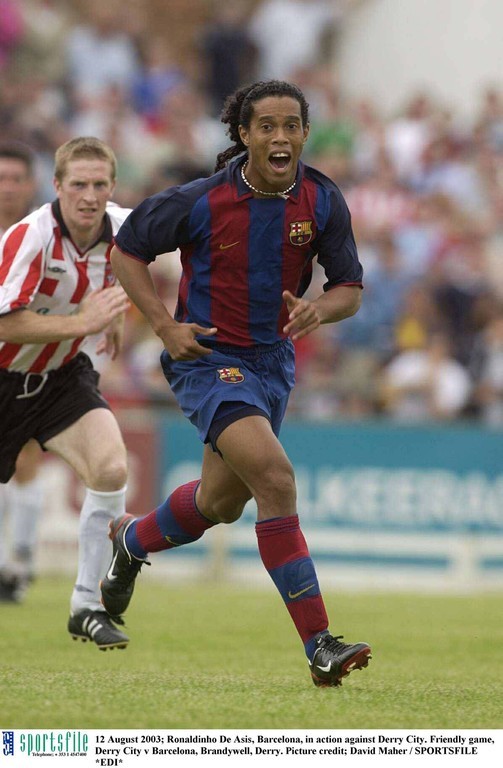 Liam Coyle competes for the ball with Patrick Andersson 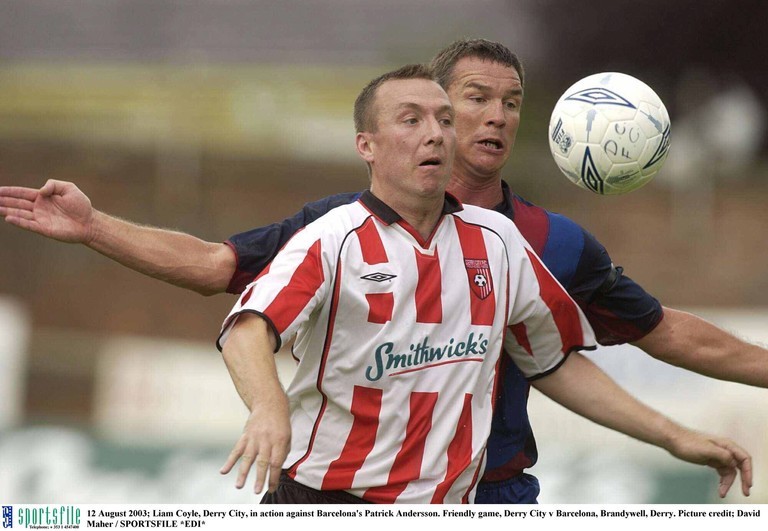 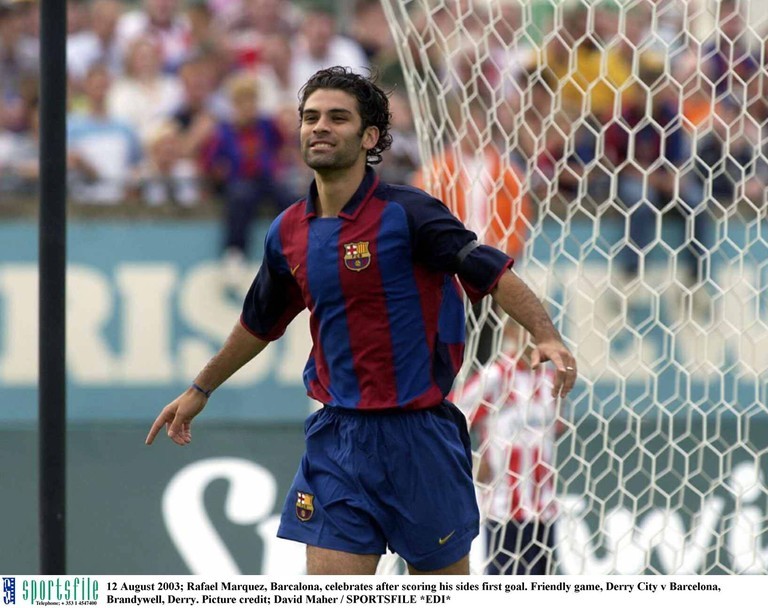 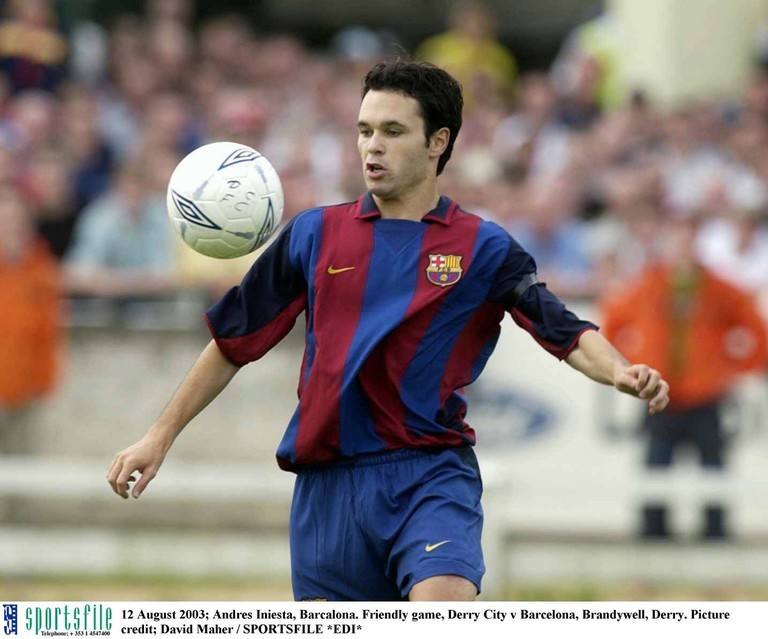 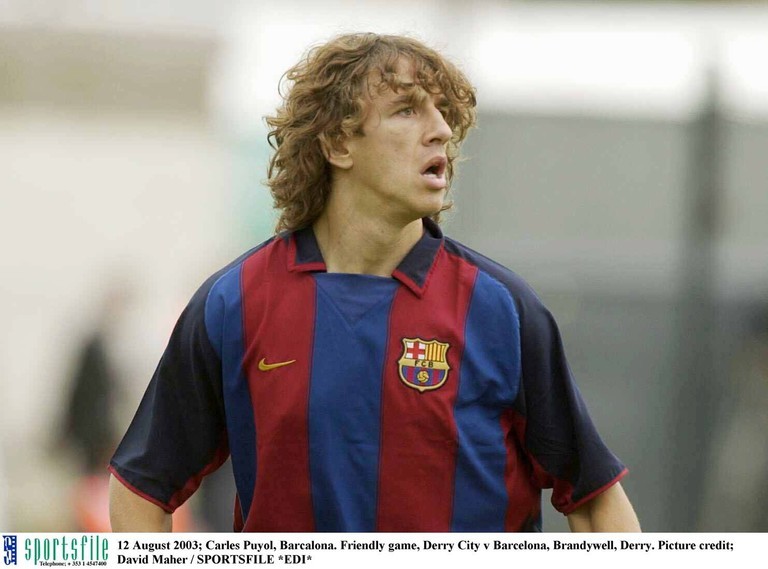 Some locals who couldn't get a ticket 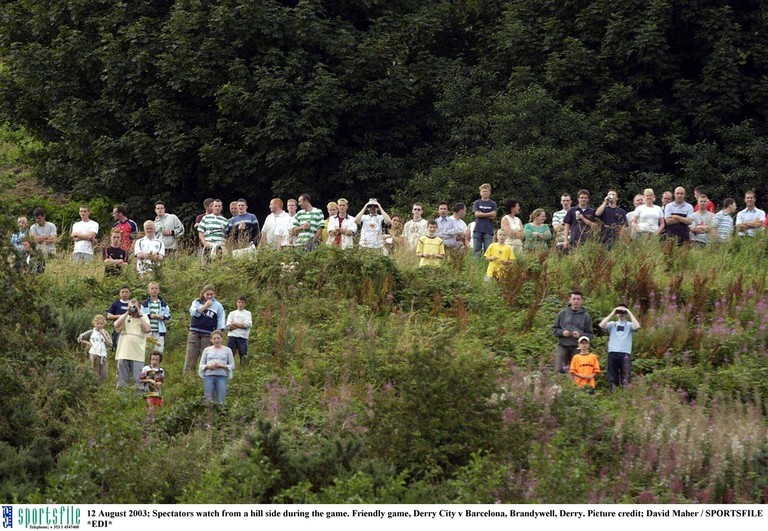 Michael Holt launches into a tackle on Ricardo Quaresma 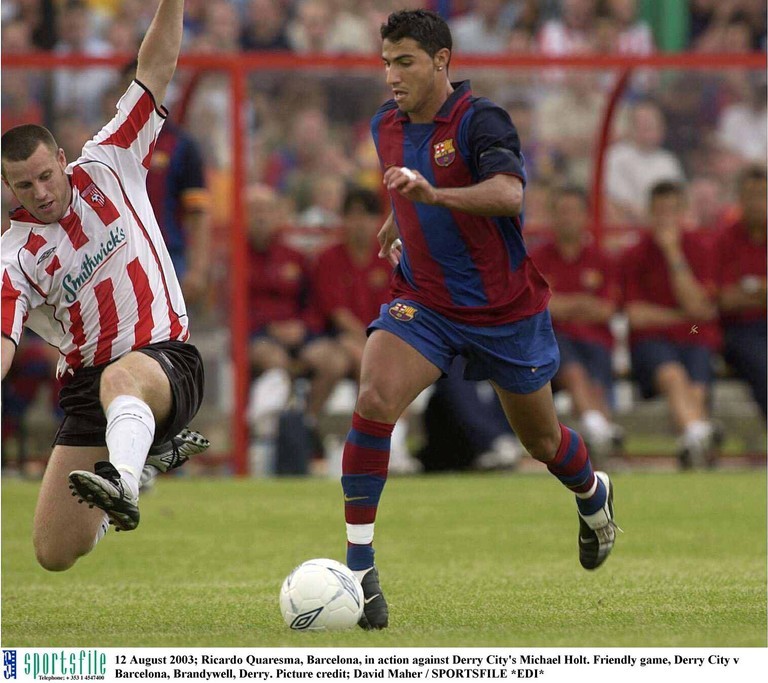 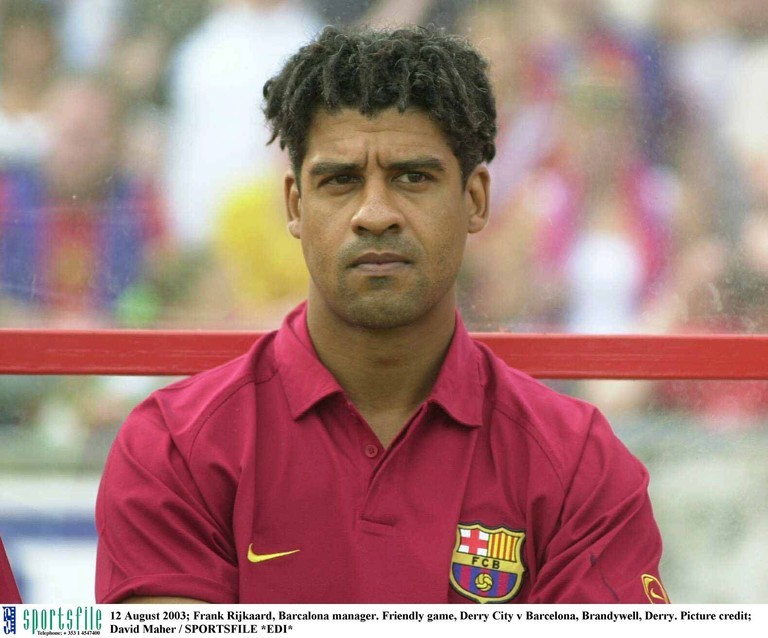 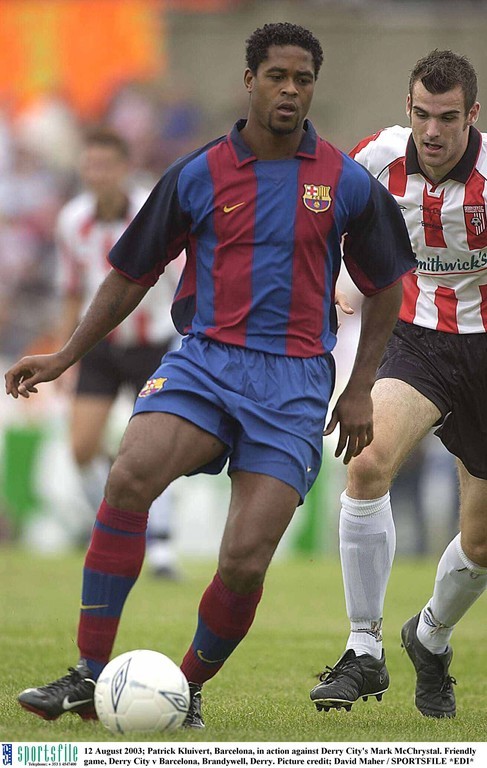