Forget What's Been Said In The Past, There Is Talent In This Ireland Squad

It was a largely forgettable opening 60 minutes at the Aviva Stadium last night, and yet there was a sense that Ireland were playing reasonably well. The level of opposition was not the highest, but the way Ireland kept the ball was impressive.

They stroked it about with conviction and confidence, showing the type of patience that has been missing from Ireland teams in recent years. The killer conviction in the final third was lacking at times, but that would come later.

Players were given the opportunity to impress and many of them took it. Even though this was a meaningless friendly, it told us plenty about the state of the Irish football at the minute.

Despite this being a second choice Irish XI, there was plenty to keep the spectators interested. John Egan continued his meteoric rise to captain his country, Josh Cullen and Alan Browne finally got a chance in the Irish midfield, while Jack Byrne represented the League of Ireland in the matchday squad.

After a qualification campaign that has featured largely the same group of core players it was always going to be interesting to see how some of the fringe members of the squad performed. You can only come away encouraged with what you saw.

For many years we have been told that we don't have the players in Ireland to perform at the highest level, that we should temper our expectations and expect a certain brand of football. The U21s did their part in dispelling such notions, but so did the players who took to the Aviva Stadium pitch last night. 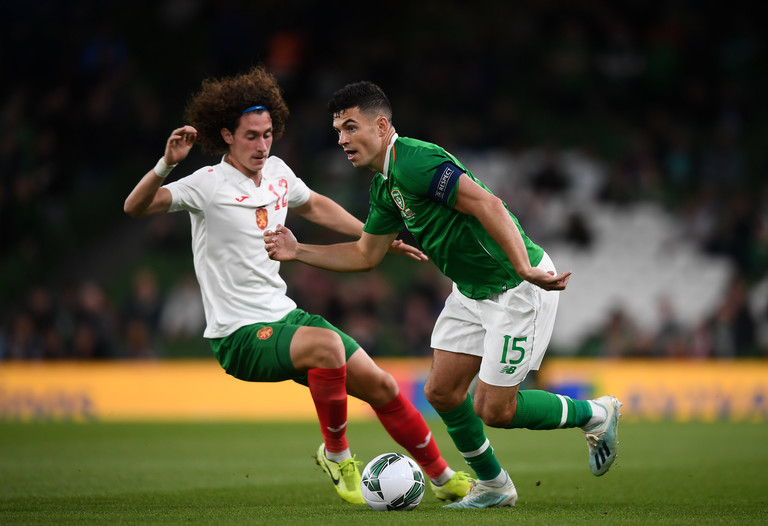 John Egan is a player who in five years has gone from being released by Sunderland to becoming a key player in a Premier League team and captaining his country. His performance last night was everything you want to see from a central defender: strong on the air, quick on the grand, the ability to carry the ball into the midfield and pick out a pass. He is going to be Shane Duffy's long-term defensive partner within the next year.

Alan Browne is a creative midfielder who Preston fans rate as one of the best players in the Championship. You could see why against Bulgaria.

At international level, many players struggle to deal with the speed of the game. When Browne got on the ball, everything seemed to slow down around him. He took the ball down in difficult positions, playing positive passes when other would have just cleared their lines. He bagged his first international goal. He's 24-years old and will be an important player for Ireland in the coming years.

Ronan Curtis (23-years old) looked really promising up front, even if his final ball let him down at times. The same could be said of Callum O'Dowda (24-years old).

Five players made their senior international debuts last night. Mark Travers and Kieran O'Hara had little do during their respective stints between the posts, so their performances were impossible to judge.

There were no such doubts about the other three.

Josh Cullen, the 23-year old West Ham midfielder, earned man-of-the-match honours. He displayed everything you would want to see in a holding midfield role. He was combative, ferocious in the tackle and aggressive in pressing the opposition. When he got on the ball he could play the simple forward pass, or hit a long switch of play. He's a real prospect.

The cutting edge that was lacking earlier in the game was certainly provided by Jack Byrne. Many had questioned the Shamrock Rovers man's ability to step up to the international stage, but such notions were gone within five minutes of his introduction.

The 23-year old was magnificent. His touch around the box was incredible, and he was always on the lookout for a defence splitting pass. Byrne provided the assist for Long's headed goal, and it was his beautiful lofted pass that allowed Enda Stevens to set up another debutant for his goal.

James Collins caused huge problems for the Bulgarian defence after is introduction, immediately transferring his club form onto the international stage. His movement, work rate and finishing ability were all on show, and he was deserving of his goal despite his short time on the pitch.

With the exception of Collins, all of the players mentioned above are 26-years old or younger. In fact only Egan is above 24-years of age.

Hunger, passion, talent. This group has it all in abundance.

Don't let anybody tell you Ireland doesn't have the players. It may only have been against Bulgaria, but there was no shortage of talent on that pitch last night.

Football
8 hours ago
By Gary Connaughton
Quiz: Can You Name The Most Expensive Irish Footballers?
2

Football
2 days ago
By Gary Connaughton
Who Knew That Ireland Were Twice Crowned World Football Champions?
Previous Next

The Rewind
12 hours ago
By Mark Farrelly
Quiz: Name These 20 Peripheral Friends Characters