Glenn Whelan has never been a fashionable footballer.

Often the target of ridicule from certain pundits, his key role in Stoke's Premier League halcyon days did nothing to convince a swathe of Ireland's football fans that Whelan could be a vital cog in a footballing machine.

Martin O'Neill thought so too, winding down Whelan's career and forcing him into an international hiatus. When he took to the pitch in the Aviva in that 'last' international, a friendly against Northern Ireland, everything about the match was forgettable. A brilliant Ireland career was to peter out at the same time as O'Neill's tumultuous reign was to come to an end.

However, Whelan has never been one to shy away from a dog fight. When Mick McCarthy took over as Ireland manager, Whelan was one of the first men he called upon.

McCarthy, in the lead up to the Denmark match, talked up Whelan and how he's viewed in his Ireland team. A player of his ilk, according to McCarthy, is appreciated "when they play in the team because they allow others to go and play".
He likened Whelan to Eric Cantona's quote about Didier Deschamps, a 'water-carrier'. The kind of player that allows other players to flourish ahead of him. Unfortunately for Ireland, the football played before Whelan has often been turgid and agricultural. How we wish that Zinedine Zidane and Youri Djorkaeff were in this Ireland team.

Although a comparison to a man who captained France to a European Championships and World Cup may be a tad overboard, it's not a million miles away, maybe only a couple of hundred thousand miles away.

Against Denmark, as he has done throughout the campaign, Whelan has been a continuum between defence and midfield, coming short to collect the ball off his centre-halves and working the ball forward. However, Whelan repeatedly aimed to get beyond the ball. Often times, this led to astute link-up play, with Whelan eventually retreating back to his role as the pivot while Ireland still had the ball. 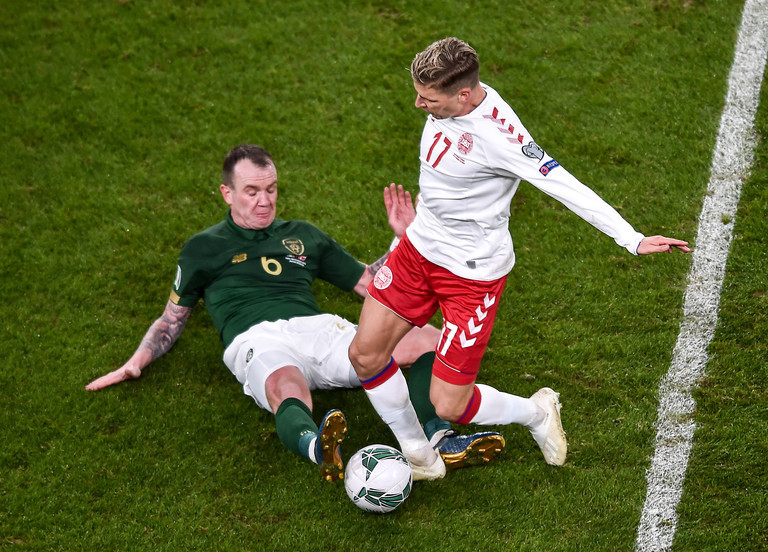 Whelan's ability to link the play made its way up the pitch throughout the match, and Whelan's passes were varied in nature. His passing percentage of 84 shows that he has the ability to keep the game ticking over and switch play on a whim. His sumptuous cross in the first half was asking for Shane Duffy's head to meet it full-on.

Whelan isn't without his negative traits. Being 35 years of age, without ever having any pace to begin with, means that he'll often be denigrated for his mobility.

Mobility, or lack therefore, is seemingly paramount for a midfielder in this day and age. Whelan's positional sense is usually spot on, particularly in the first-half of games. However, when games become more stretched, and Whelan aims to move a team forward, he'll be caught off guard.

However, Whelan continually puts his head above the parapet for ridicule, often because he tries to get on the ball to allow things to happen. You can never say that Whelan shies away from the play whenever he's on the pitch. In fact, Whelan was the furthest of Ireland's middle three in order to press the ball when Denmark scored. This is purely down to Alan Browne pressing the thrower and Jeff Hendrick inexplicably dropping deeper than he had been all game.

In the issue of fairness, you can't look beyond Whelan's limitations when talking about his game. There's his age, his lack of mobility and a tendency to be dragged out of position once a game becomes stretched, but pinpointing these limitations is to do the rest of his game a disservice.

Glenn Whelan is a safety blanket which every team needs. Furthermore, he continually aims to drive a team forward, something which has been a rarity of Ireland sides in the recent past. Of course, it's a given that he gets stuck in. His yellow card against Denmark was farcical, but I suppose Glenn Whelan is a player that time forgot, with that tackle probably warranting a round of applause back in Whelan's day.

His substitution was a necessary evil, with Ireland chasing the game and in need of two goals. His dark green shirt made even darker by the sweat emanating from Whelan's brow.

It's a testament to Whelan's career that he's been lauded at every club he's played for. Stoke are the obvious example, with Whelan having spent a decade at the Potters. However, he was a key cog in Aston Villa's eventual promotion back to the Premier League. Even though he's only played a few games in the maroon of Hearts, Jam Tarts fans immediately see the pivoting Clondalkin native as a Rolls Royce of a footballer.

It's hard to know if that's Whelan's last match in an Ireland jersey. The play-off in March may signal that, but those matches seem an age away.

Ireland will hope that there's a readymade replacement in Josh Cullen to bring a metronomic range of passing and tenacity into the next decade. Furthermore, Cullen could do worse than to look to his international teammate for a template for his footballing future.