It was a long time coming, but Stephen Kenny finally has his first competitive win as Ireland soccer manager. His team were full value for their victory in Azerbaijan this evening, playing some nice football on the way to a 3-0 victory.

Callum Robinson will steal most of the headlines after his brace, but there was no shortage of good performances throughout the side. The showing from Chiedozie Ogbene on his competitive debut was particularly eye-catching. There was a lot for Stephen Kenny to build on.

Ireland will now look to build on this result moving forward, with Tuesday's friendly against Qatar an ideal opportunity to do so.

Putting together a good run of results over the remainder of the year would certainly go a long way to easing the pressure on Stephen Kenny. It is expected that his position will be reviewed at the end of this qualifying campaign, with some calling for the FAI to replace him as Ireland soccer manager.

Stephen Kenny was in a jovial mood after the game, hinting that this win was a long time coming after some positive performances in recent windows.

“It was important to win tonight” - Manager Stephen Kenny on a "brilliant” away win against Azerbaijan #AZEIRL #WorldCup2022 #RTEsoccer pic.twitter.com/fW6AuNT8Jc

However, Didi Hamann believes he still has a long way to go to prove his credentials as Ireland soccer manager.

Speaking on RTÉ after the game, the former Germany midfielder said he wasn't impressed with the way Stephen Kenny had written off all the previous results prior to tonight.

‘The manager just won his first game in 13 competitive games. To turn around now and say he’s lost just one of the last seven, I think is wrong’ - @DietmarHamann says today’s win needs to be put into perspective #AZEIRL #WorldCup2022 #RTEsoccer pic.twitter.com/WZdkwJQqqC

They won the first game in 13 competitive games. I didn't like what the manager said.

The manager just won his first game in 13 competitive games. Out of the 13 games, there was at least six, seven, eight opponents that I don't expect Ireland to beat, but they should be able to beat them.

Now to turn around, after winning for the first time in 13 games, and say 'well we only lost one in the last seven' I think is wrong. Look at the table, they've got five points with two games to go against Luxembourg and Portugal. and you've got Luxembourg and Azerbaijan in your group.

Regardless of how many young players you bring in, it's not just a team of youngsters. You've got Doherty, Duffy, Egan there. Cullen has been the biggest find in the last few games, he's been brilliant.

Yes you've brought young players in, but I don't like [that interview]. Keep your feet on the ground, put in a positive performance on Tuesday and things might look different.

After the Portugal game, I did fancy them to beat Azerbaijan because it was a hammer blow. There is no excuse now not to have a positive performance and beat Qatar. I think they need it, [Kenny] needs it and the team needs it.

But to turn around now, after winning the second game in the 17 games he's been in charge, and say 'we only had one defeat to two late goals in Portugal' is wrong.

You've got to put things into perspective. Things probably weren't as bad as people made out, but they're not as good as he sees it...

I wanted him Kenny to succeed, for the team to succeed. I think they deserve it because they've been through a lot in the last few weeks where they have been hard done by, especially the Portugal game.

To me, it dampened a small bit what they did tonight. Tonight they beat the 117th ranked team in the world. Azerbaijan have got some good players and can handle the ball, but they're not a good team.

These are the games you have to win, regardless of how. They probably should have had more, they couldn't have done more. They've got to be consistent now and back it up on Tuesday...

If you put the performances in you won't go 12 or 13 games without a competitive win. They need to back it up on Tuesday, I hope they do.

Here's hoping they do just that and Stephen Kenny and the Ireland soccer team go and beat Qatar on Tuesday evening. 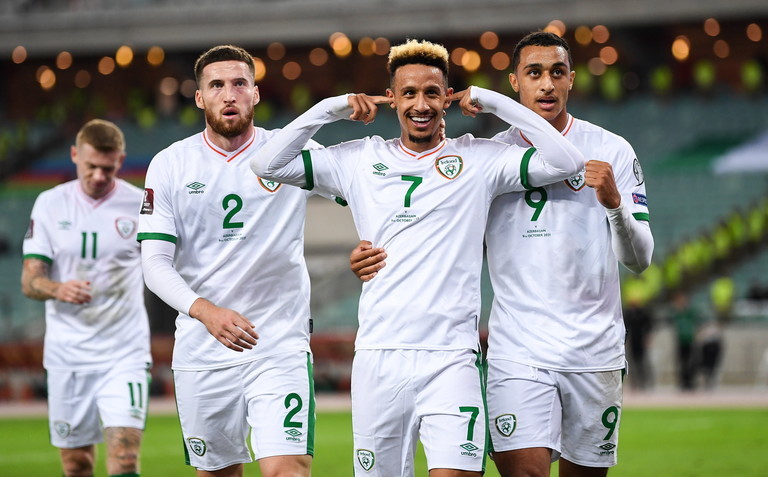