So far, so good for the Republic of Ireland as they remain unbeaten after three games in Euro 2020 qualification.

Ireland fought back from a goal down to earn a 1-1 draw with Denmark in Copenhagen to add to the two wins over Georgia and Gibraltar in March.

The result means the boys in green are sitting pretty at the top of Group D, with seven points from three games. But there is still much to be done for Ireland to qualify for the expanded European Championships next summer.

After a disastrous Nations League campaign, Ireland must finish in the top two of their qualification group to book at place at Euro 2020 next summer. So how can they do that?

The simple answer is to win the rest of their games. Mick McCarthy's men have dropped just two points from their opening three games and winning out the rest of them means they would be guaranteed top spot in the group.

But let's be honest, that is not so likely. 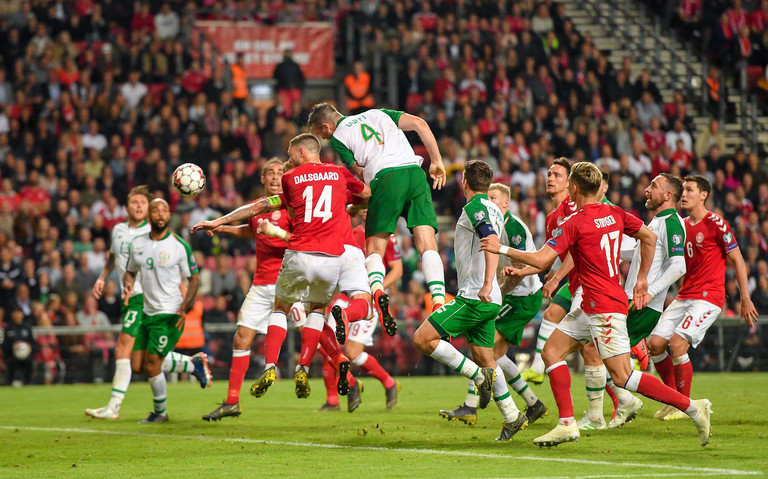 Still, Ireland are in a good position after picking up a point away to Denmark on Friday. Barring a huge upset, Ireland will add another three points against Gibraltar on Monday but from then on, the run of fixtures is less kind.

In the final four games of the Euro 2020 qualification, Ireland must face Switzerland twice, travel to Tbilisi to take on Georgia and host Denmark to close out the group.

The game against Georgia is a must-win, but the other three games take on a look of must-not-lose as three more draws against our qualification rivals could be enough to see us through.

If all three of Ireland, Denmark and Switzerland pick up the maximum six points against each of Gibraltar and Georgia - which is no given considering Georgia's recent record - it would become a matter of who can pick up points in the big games.

We could watch this all day. Good luck trying to stop Shane Duffy in the air 👀pic.twitter.com/Y1bSfuJzTi

Denmark already picked up a point away to Switzerland while Ireland have now nicked a point of their own in Copenhagen. If Ireland can take three draws from their remaining three games against the two top seeds, they will be praying for there to be a winner of any kind when Switzerland travel to Denmark in October.

A draw in that game would put all three teams level at the top of the group, with a winner determined by goals scored in games contested between the top three teams. That would likely see Denmark and Switzerland through after their 3-3 draw in March as Ireland have hardly been prolific so far in the campaign.

Simply put, Ireland's future is still in their hands. The easiest path to qualification is to secure wins over Gibraltar and Georgia, battle out two draws with Switzerland and then beat Denmark at home in the final game. That would guarantee Ireland at least second place in the group - and with that, automatic qualification for Euro 2020.

A defeat in any game complicates things for Mick McCarthy and co. and would put their fate in the hands of their rivals.