Well, that was a bit of alright. Much of the buildup to this game was dominated by Ireland's supposed lack of substance in possession, with the Danes making their opinions of this Irish side known in the past.

Ireland would go on to put in a well-rounded display in Copenhagen, visibly frustrating the Danes while managing to play some decent attacking football of their own.

When they fell behind, they didn't bow down. They got themselves back into the game, securing a vital away point as a result. Here's how we rated the players on the night.

Dealt well with a tricky Eriksen free kick in opening 10 minutes. Showed some amazing distribution with a few pinpoint long-range passes to launch Irish attacks, but was often let down by poor touches from his teammates further up the field.

Made himself big to deny Poulsen a wonderful opportunity from close range. Could do very little about the Danish goal.

Wasn't given much opportunity to roam forward, but looked very assured in defence. Was almost caught out in the air by Delaney at the far post in the second half, but was otherwise solid.

Not his best game for Ireland, but he played his part. 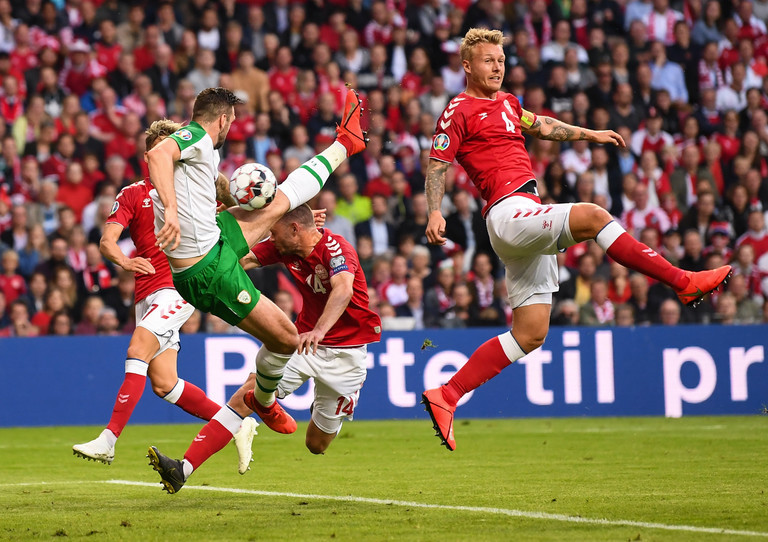 Displayed some heroic defending early on, showed a capability to step out of the defence as well. Held the line well as Denmark applied pressure at various stages throughout the game, and his aerial ability was telling as always.

Came up big when Ireland needed him most. A super display.

A relatively quiet opening period, which is always an encouraging sign for a central defender. He was caught out on a couple of occasions in the second half, and his lack of aggression cost Ireland on the Danish goal.

Looked dangerous going forward early on, and put in a big challenge to set the tone. His attacking influence was largely nullified by Denmark in the second half, but he continued to look very solid in defence.

Certainly growing into the role at international level.

Gave the ball away on multiple occasions in the opening half, and offered little in the way of attacking threat. Slowed the play down needlessly at times, even if he did play McClean in with a nice pass at the start of the second half.

Much of his influence has been diminished with Hourihane taking over the set piece duties, and was lucky to stay on the pitch until the 66th minute. 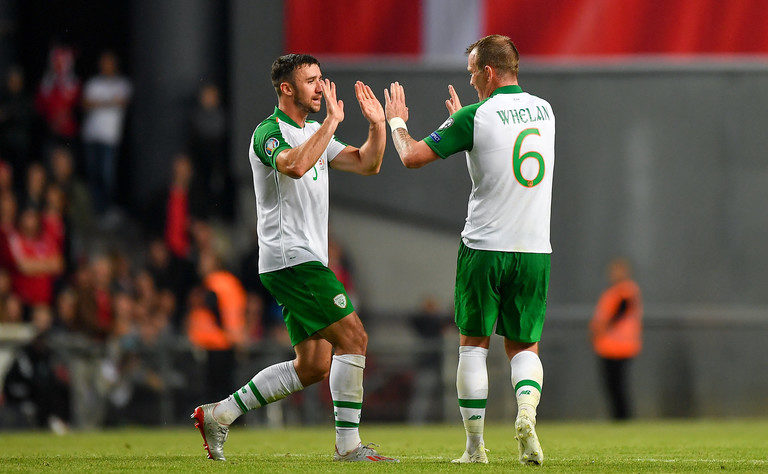 Displayed his intent early on with some intense pressing on the Danish midfield. Marshalled the middle third expertly, and ensured that Christian Eriksen did not get an inch of space.

Would not have got on the ball as much as he would have liked, although that could be said of all midfielders in this game. He certainly justified his inclusion.

His set-pieces are an amazing asset to have in the team, as demonstrated when Shane Duffy almost steered home a cross from the Corkman in the opening half. Made a couple of vital interventions at the back.

Was not as influential from open play as he had been in March, but made up for it with his set-piece delivery.

A typically hardworking performance down the left flank, McClean's tireless running is important in games such as this one.

Was unlucky to be denied at the near post by Kasper Schmeichel before the hour mark, and had the chance to grab a winner late on. A solid display, but not enough quality in forward areas. 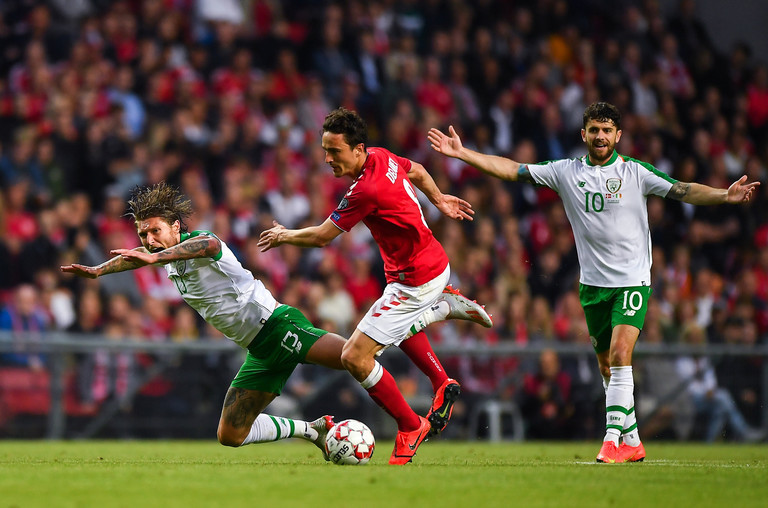 Given a very short leash by Schone, with the Ajax man following him any time he attempted to drop a bit deeper. Looked very good on the ball at times when given the opportunity, but his influence wained as the Danes turned the screw.

He dropped deeper as the game went on, but that only negated his biggest strengths. He was well managed by the opposition, who clearly marked him out as Ireland's creative focus.

Worked tirelessly, but was afforded very little encouragement by the Danish defence. Wandered offside needlessly on too many occasions, although he still worked hard in a largely thankless role up front.

Unfortunately he did not have the same impact as he did against Georgia, but he was the one attempting to drive Ireland on as they chased the equaliser. His movement had an influence in winning the crucial free kick for Ireland.

Was largley anonymous after coming on, until the goal. He won the free kick, before delivering a sumptuous cross for Duffy to level the scores.

Not on long enough to be rated.

Football
5 months ago
By Gary Connaughton
'It Didn't Work, The Shape Of The Team Didn't Work' - Doherty & Coleman Repeat Unlikely
Previous Next