The Best Irish Football Panini Stickers From Tournaments Of The Past

The return of the European Championships next Summer means the return of The Panini sticker album.

The albums are always great fun to collect and there's always an added interest when Ireland are involved. They've always been extremely popular and if you're a young child you might want to keep hold of your Euro 2016 album for a few years after a copy of the Mexico 70 collection sold for a whopping €2400 recently.

One of the best things about the Panini stickers that they give you the opportunity to reflect on football eras and trends of yesteryear and that's exactly what we've been doing.

We've been taking a close look at the Ireland panini stickers representation over the last five tournaments we've qualified for, from Euro 88' to Euro 2012. 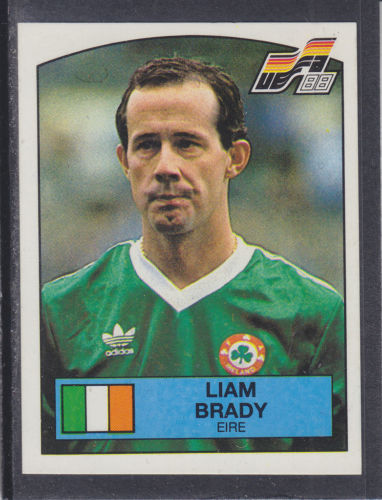 Younger readers may only recognise Brady from television and without any hair but there was a time when he was a very good footballer too. Here he is in the final years of his International career looking like he's just been caught nicking money from his mothers purse. 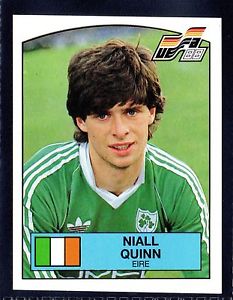 Fresh faced 19 year old Niall Quinn has a real deer in the headlights look about him here, probably because he's just taken a shit load of abuse over his haircut. 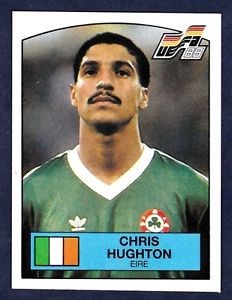 Current Brighton boss and former Ireland assistant manager Chris Hughton earned 51 caps for Ireland between 1979 and 1991, here he is representing Ireland with a cheeky moustache you might see in an early-eighties adult film. 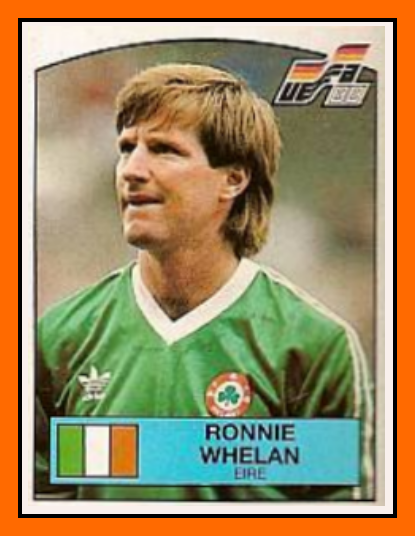 Ronnie Whelan was one of Ireland's best players at Euro 88 and he lit up the tournament with a stunning volley against the USSR, he also looks remarkably like Paul McShane in this picture. 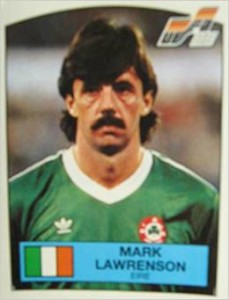 Lawro didn't even play for Ireland at Euro 88 as he was injured, his last game was in actually 1987 against Israel but the good people at Panini obviously thought this picture was too good not to publicise and we thank them for that 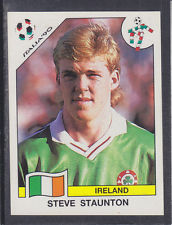 Steve Staunton of all people flying the flag for the mullet at the start of the decade in Italia 90', strictly business at the front and party at the back. 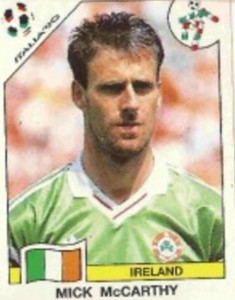 Mick McCarthy ladies and gentlemen, looking as sinister as a footballer as he does a football manager. Here he is perfecting his thousand yard stare which we've grown to love over the years. 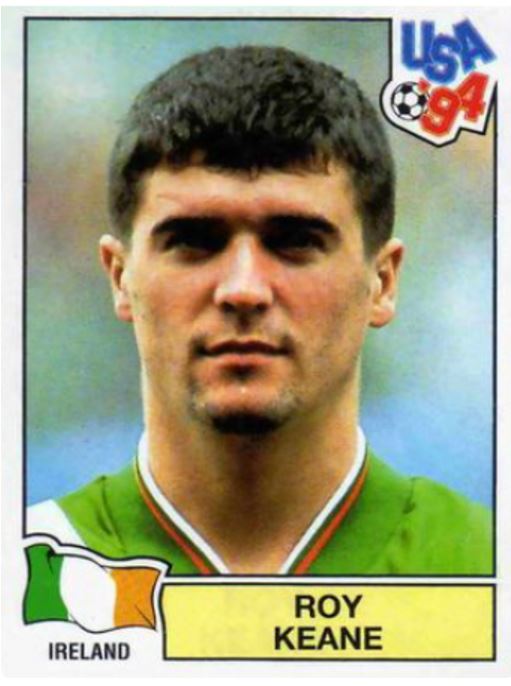 22 year old Roy Keane looking as happy as your likely to ever see him as he lines out for his country at the start of the nineties. Little does he know of the bitterness and resentment that lies ahead. 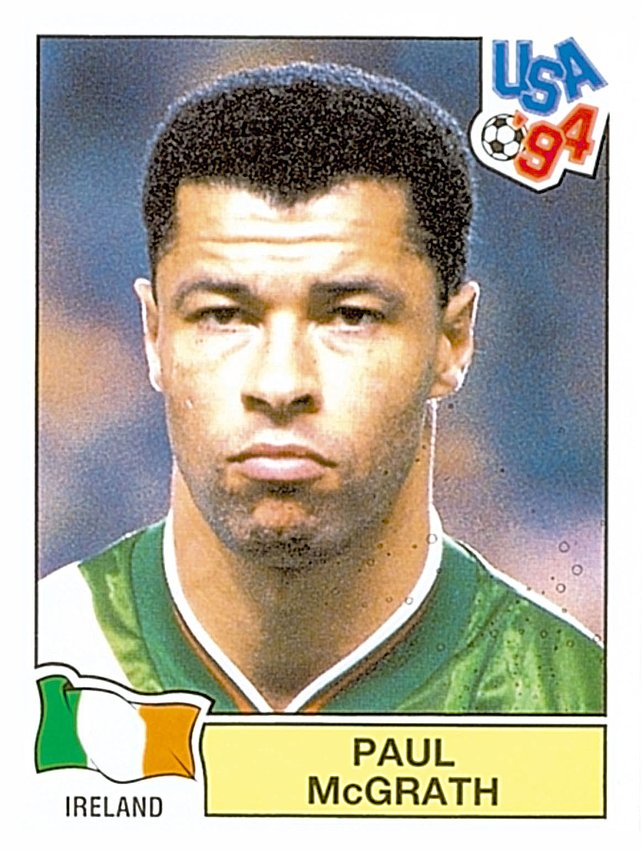 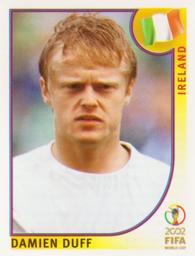 23 year old Damien Duff looking particularly disgruntled at having to represent his country here, he's just about ready to box the innocent photographer who's taking his picture. 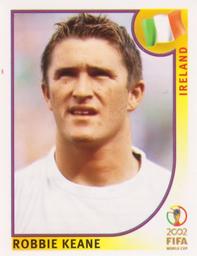 Robbie Keane had a great tournament in the 2002 World Cup with the highlight being that last minute equaliser against the Germans. Here he is quite clearly not giving a shit about whatever friendly this picture was taken in. 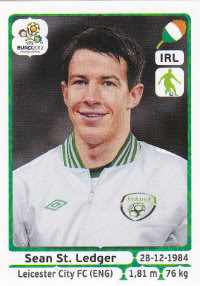 Sean St Ledger was clearly very happy to be picked for Euro 2012, either that or he's wet himself and it feels kind of nice. 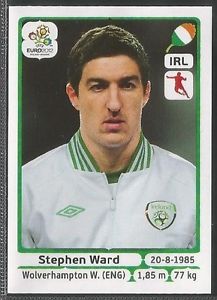 We all know those emo kids in school who just don't want to be there, Stephen Ward is that kid. 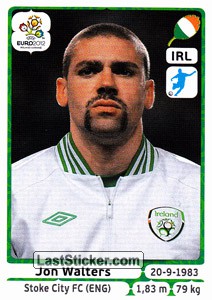 Is there anything Jon Walters can do wrong? Clearly not, here he is looking like a badass mixture of Juan Sebastian Veron and a Mexican drug dealer in 2012 before he attained his legendary status.

Read Also: 2002 World Cup Call Cards Anyone?
Read Also: Remembering The Phenomenon That Was The Irish Fans At Euro 2012

Football
2 years ago
By PJ Browne
Terry Phelan: We Believed We Could Win That World Cup
Football
3 years ago
By Arthur James O'Dea
Paul McGrath Reveals Precise Moment He Knew His Career Was Over
Football
6 years ago
By Conor Neville
The Scandalous Story Of How Chile Was Thrown Out Of The 1994 World Cup
Previous Next

Football
2 years ago
By PJ Browne
Terry Phelan: We Believed We Could Win That World Cup
Football
3 years ago
By Arthur James O'Dea
Paul McGrath Reveals Precise Moment He Knew His Career Was Over
Football
6 years ago
By Conor Neville
The Scandalous Story Of How Chile Was Thrown Out Of The 1994 World Cup
Popular on Balls
The Rewind
1 day ago
By Eoin Harrington
Watch: Brilliant Line Of Duty Edit Sums Up Boris Johnson COVID Party Farce
30