Ireland Women's Team Are Capturing The Nation's Hearts, And It's Not Just Lip Service

There seems to have been a shift in momentum when it comes to the Republic of Ireland women's senior football team. Whereas the exploits of the 'Girls in Green' were often treated an afterthought in the past, they are now very much at the forefront of the minds of the footballing public in this country. And not before time.

4,511 people made their way to Tallaght Stadium on a freezing Thursday night to watch Ireland's Euro 2021 qualifier against Greece, a game Vera Pauw's side would win 1-0. Some of the football on show was as good as you will see at any game you are in Ireland over the remainder of the year.

There was a sense of occasion around the game. It was hugely encouraging to see so many young girls come out to watch the match, being inspired to carry this momentum into the next generation. Perhaps even more striking was the amount of young boys in attendance, none of whom seemed any less excited than if this were a men's fixture. 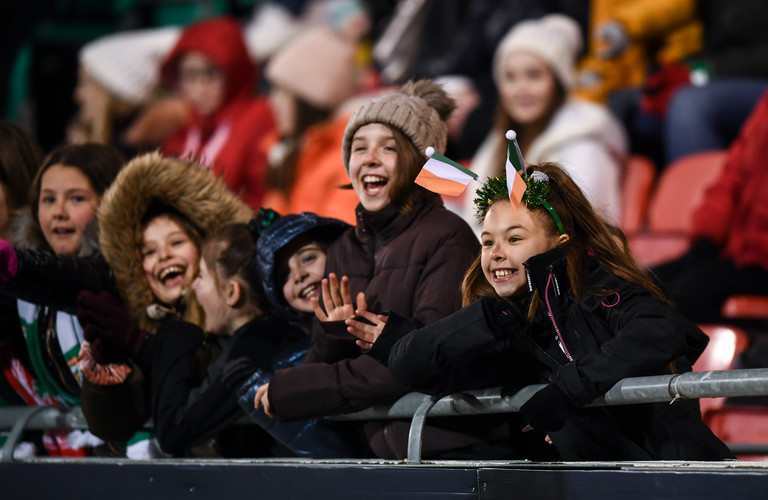 There are many reasons for the growing popularity of the women's game. Last summer's World Cup being broadcast on RTÉ brought the game to the masses in a way that had never really been done before, with many new fans picked up during this period seemingly maintaining their interest in the sport.

While Ireland were not at that particular tournament, some of the entertaining football in display certainly forced more football fans to look deeper into the game in their own country. The FAI have capitalised on this, with upcoming women's fixtures now given the type of publicity to rival that handed to their counterparts in the men's team.

It certainly doesn't hurt that the current Ireland team is a supremely talented one. The game has grown significantly in this country over the past decade or so, the results of which can now been seen on the pitch.

This is a team containing the likes of Denise O'Sullivan, Katie McCabe, and Megan Campbell, top class players who would grace any team.

This campaign has been a hugely promising one. The fact that they come away slightly disappointed with ten points from their first four games speaks volumes. Speaking after Thursday's win over Greece, captain Katie McCabe said that the amount of talented players in the squad has resulted in the competition for places raising everyone's game to another level:

It’s great having that competition, no one is safe, it keeps everyone on top of their game, you have to be performing at the top level to be making the squad now.

The fact that we have that depth is fantastic for us in a big important campaign like this, it’s really important.

Next up is a trip to Montenegro on Wednesday, a game that will have a massive say on how the remainder of the group plays out. A win in that one would see Ireland all but sew up second spot and a play-off place despite having three games left to play.

They will have their sights set higher than that, however. While finishing above powerhouses Germany (who Ireland still have to play twice) will likely be beyond them, a spot as one of the three best second placed teams would be enough to get them through to the finals in England.

If that is to be achieved, a win in Ukraine will be necessary, no easy task considering Ireland emerged with a narrow 3-2 win in the reverse fixture. That game takes place in June, but nobody will be looking beyond the Montenegro fixture. McCabe said as much the other night:

I’m not going to get too ahead of myself. I think it’s just important that we’ve put ourselves in a good position and it is about continuing to do it and keeping focused.

We’ve got ourselves in this position by focusing on the next game, and, as I said, we’ll worry about Montenegro and then the Germans when they come...

I suppose, the Germany game is always going to be a big one for us, they’re top seeds, they’ve dominated European and world football for years now.

Like that, we’ve shown what we can do against the big nations in previous years - obviously the famous result against the Netherlands - but look, as I said, I’m not going to get too far ahead and look at the Germans, it won’t mean anything if we don’t beat Montenegro. 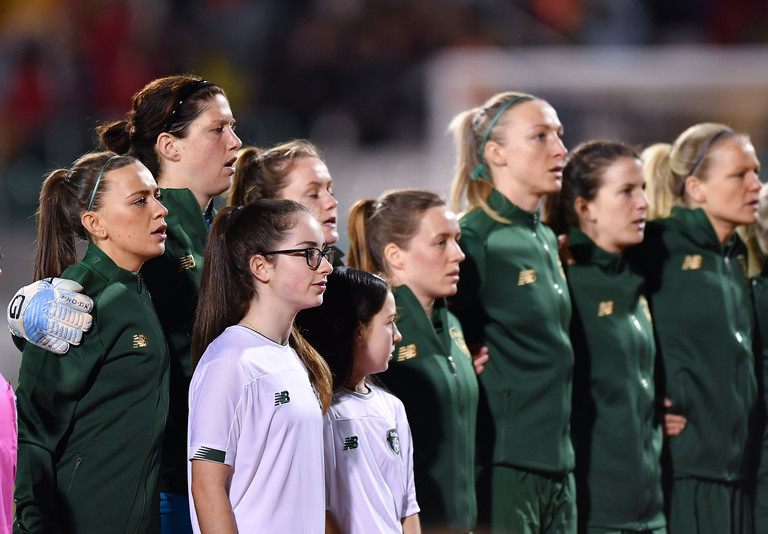 Just to be in this position shows exactly how far Ireland have come. After all, this is a country who have never qualified for a major tournament at senior level.

They have certainly built on their World Cup qualifying campaign, where they were unfortunate to be drawn in the same group as both The Netherlands (who Ireland drew 0-0 with away from home) and Norway, two of the traditional powers in the European game.

A change of manager would come in the intervening months, but Vera Pauw seems to have pushed the team on once again. The Dutchwoman brought with her a significant pedigree. She won over 80 caps for her country in her playing days, going on to manage her home country as well as the likes of Scotland and the Houston Dash.

Despite only being in the job for a matter of months, McCabe says that Pauw is already part of furniture:

She’s basically Irish now. With Vera, the experience she has at playing level and obviously managerial level, she’s come in, she’s just simplistic, she’s fantastic, she makes it clear what she wants from us and we go out and do the job, but it’s been fantastic.

I’ve loved playing under her and leading the girls out, it’s been great. We’ve remained unbeaten so far in the campaign. I don’t want to jinx it but I’m really optimistic for what the future holds for Irish women’s football.

We all are. Coming away from Tallaght on Thursday night, it was difficult not to be enthused about what can happen for this team and the women's game in general in the coming years.

The next generation will be inspired by what they have seen over the past 12 months or so, with the players themselves doing everything they can to connect with the supporters. They stayed behind after the final whistle to take selfies and chat to fans, adding to the growing sense of community around this group. 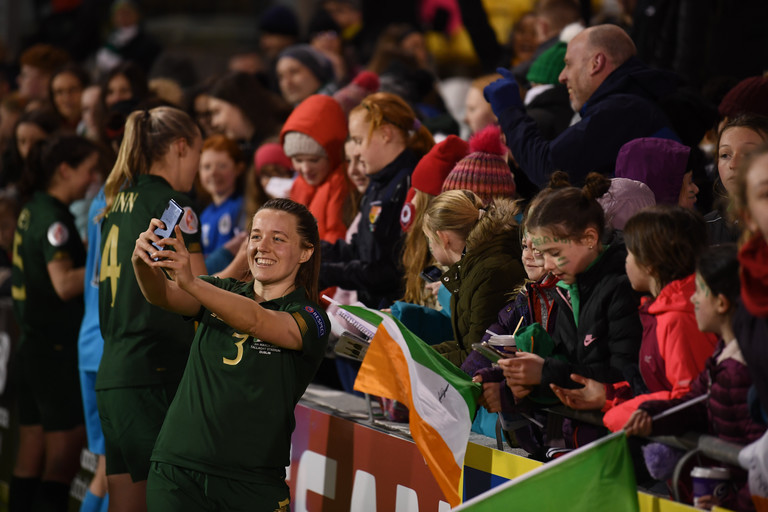 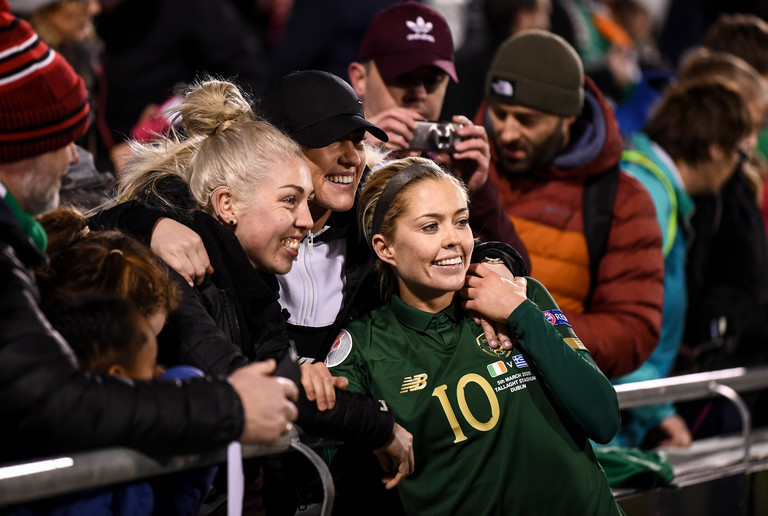 This is a team who will be around for a while yet. The average age of the 23-player group for these two qualifiers in 25.8-years old. Reaching a major tournament would not only be a huge moment in their development, but for the sport in general.

It is becoming increasingly clear that they will have the entire country behind them.

SEE ALSO: Denise O'Sullivan Is Undoubtedly The Brightest Irish Midfielder In The Game

Football
2 weeks ago
By Balls Team
Where Are They Now? - The Ireland Fans At The Walkinstown Roundabout In 1990
1

Football
2 weeks ago
By Gary Reilly
Watch: Robbie Brady's Post-Match Interview Is The Most Beautiful Thing We've Ever Seen
3

Football
2 weeks ago
By Balls Team
Where Are They Now? - The Ireland Fans At The Walkinstown Roundabout In 1990
Football
2 weeks ago
By Gary Reilly
Watch: Robbie Brady's Post-Match Interview Is The Most Beautiful Thing We've Ever Seen
Football
1 month ago
By Maurice Brosnan
Balls Remembers - The French Meltdown At World Cup 2010
Popular on Balls
Football
19 hours ago
By Gary Connaughton
How A 'Lamped' Damien Duff Ended Up Doing A Set In Japanese Comedy Club
3