James McClean is the latest Ireland player to speak out over the fallout to a pre-match video with has caused consternation within the Ireland camp.

The Stoke City winger took to Instagram to speak on 'gutter press' which inferred that McClean, alongside teammates Shane Duffy, Darren Randolph and Robbie Brady, was 'restless' in the Ireland camp. 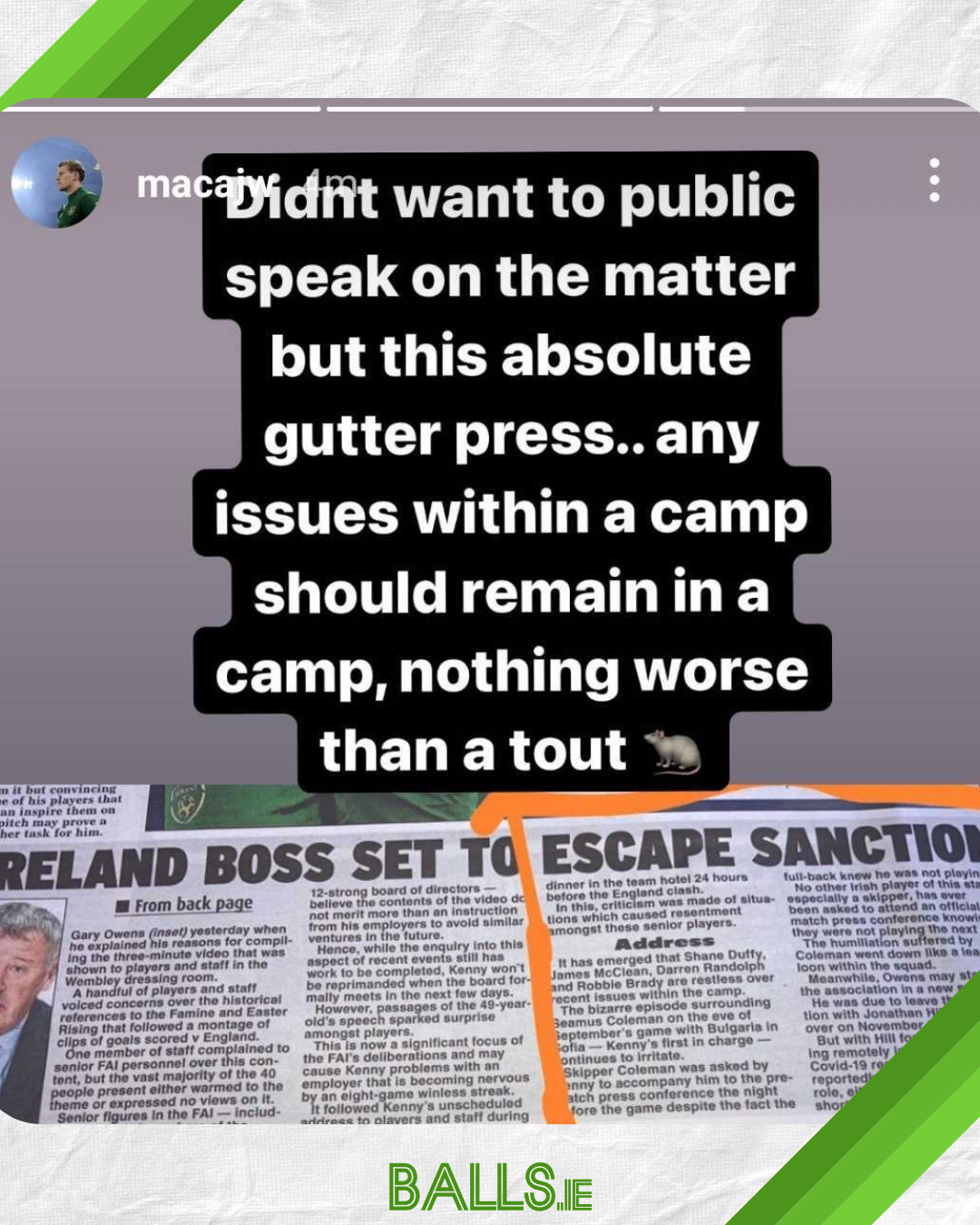 The story which apparently 'irritated' the posse of players stems from Ireland's first game under Stephen Kenny, when captain Seamus Coleman was asked to attend a pre-match press conference despite knowing that he wouldn't be playing against Bulgaria in Sofia.

McClean's response, complete with rodent emoji, is as emphatic as it gets.

The fallout to this episode continues, with Stephen Kenny apparently having a constructive meeting with FAI interim CEO Gary Owens. Kenny is also set to meet with the FAI's new CEO Jonathan Hill within the next week.

Also, the FAI are set to hear from Seamus Coleman and goalkeeping coach Alan Kelly in order to establish the facts surrounding the episode.

The FAI will seek input from coach Alan Kelly and captain Séamus Coleman about Stephen Kenny’s preparations for Ireland’s recent friendly in England.

Apparently the video was fine but "elements" of his subsequent speech caused discomfort among some players/staff#COYBIG pic.twitter.com/cgI5YwBsUI

Both Coleman and Kelly left the Ireland camp before the international window's conclusion, with Kelly not travelling to Dublin for Ireland's final Nations League match against Bulgaria citing health concerns.

Coleman, who hasn't yet played under Kenny, was set to start against England but pulled out of the squad due to injury.

Ireland left-back Enda Stevens, who missed out on the international break due to injury, has expressed his disappointment that aspects of the dressing room have been leaked to the media.

It's not anticipated that Stephen Kenny is set to face marked punishment. However, it is an unwelcome occurrence given the tumultuous start to his tenure as Ireland boss.

Football
1 week ago
By Balls Team
So Close But So Far Away: How Ireland Almost Co-Hosted Euro 2008 (Without A Bloody Stadium)
Football
2 weeks ago
By PJ Browne
Declan Rice Made Up Mind On England Switch Weeks After Playing For Ireland
Previous Next

Football
6 days ago
By Balls Team
How Irish Fans Shocked The World And Filled Giants Stadium
Football
1 week ago
By Balls Team
So Close But So Far Away: How Ireland Almost Co-Hosted Euro 2008 (Without A Bloody Stadium)
Football
2 weeks ago
By PJ Browne
Declan Rice Made Up Mind On England Switch Weeks After Playing For Ireland
Popular on Balls
Football
23 hours ago
By Donny Mahoney
Leon Goretzka With Pointed Goal Celebration Right In Front Of Hungarian Supporters
Football
23 hours ago
By Eoin Harrington
A Mad Night At The Euros Turned Into A Very Good Evening For England