It was a crushing end for Ireland on the Algarve on Wednesday night, as Cristiano Ronaldo struck twice in the dying minutes to give Portugal a 2-1 win, but Ireland goalscorer John Egan praised his teammates for a heroic performance.

It was, inevitably, Cristiano Ronaldo who was Portugal's hero on Wednesday night, as he broke Irish hearts to break the world record for international goals with two headers in the last minute

For a long time though, it looked like Corkman John Egan would be the hero, after he gave Ireland a sensational lead on the stroke of half-time in Portugal.

He was given RTÉ's man of the match award by co-commentator Ronnie Whelan, and in his post-match interview with Tony O'Donoghue he said he was delighted to have scored, but that it ultimately meant little in the context of the evening.

Just heartbreaking really that we couldn't get a result to go with it.

It was indeed a heartbreaking night for Ireland and, for such a young squad, it will be a bitter pill to swallow.

🇵🇹 2-1 🇮🇪
John Egan: "We're all gutted. To put in that performance away from home against such a world-class team, with one of the best players ever in it, to walk away with nothing is very disappointing."

Egan, though, was eager to praise the positives of his side's performance, while acknowledging the crushing disappointment. He pointed out the steep task Ireland had in front of them at the outset of the evening, and was proud of his teammates for how they took it on.

It's honestly gutting. We're all gutted inside there. To put in that performance away from home against a world class team with one of the best players ever in it...we really felt like there was something there for us tonight.

To walk away with nothing is very disappointing, but you know I suppose we'll look back on it as a really good performance.

He reserved particular praise for Adam Idah and Gavin Bazunu, 20 and 19 years of age respectively, who stole the show with their impressive performances.

Egan again made note of how strong the opposition was for the youngsters, and praised the way in which they took Portugal on.

We caused them problems throughout the night. Adam Idah led the line unbelievably, he's up against two world class centre halves and he absolutely dominated them from start to finish. We created openings on the counter and it was a fantastic performance and we're just devastated not to get a result.

He's fantastic. Really top young keeper, we've got Caoimhín as well who didn't play tonight - two top, outstanding talents and Gavin showed how good he is tonight to save a penalty like that. It was a good penalty, unbelievable save, and it gave us a platform to build on.

It wasn't to be for Ireland in Portugal, but goalscorer John Egan was right to point out the positives of what was one of the best Irish performances in recent years. Given how young the team is, it's extraordinary that Ireland came within minutes of beating recent European champions, and it would seem a bright few years is ahead for this team.

It feels strange saying this after a defeat, but the Stephen Kenny era might just be back on track. 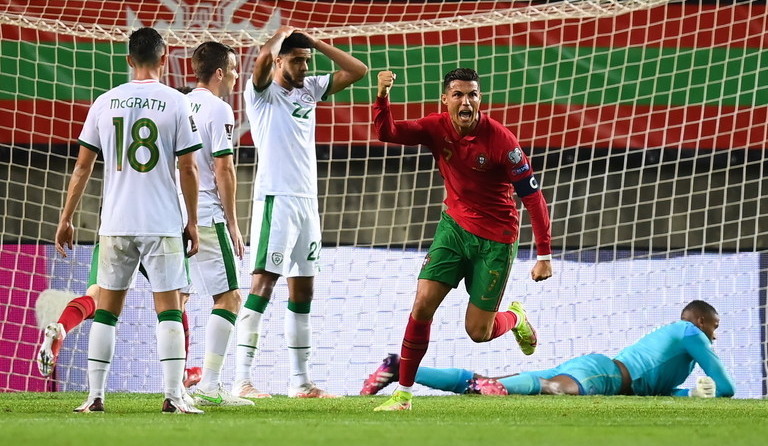 Football
3 weeks ago
By Jonathan Byrne
Gary Neville Points Blame At 'Whinging' Duo After Man United Draw
Football
1 month ago
By Gary Connaughton
Watch: Roy Keane & Jamie Carragher Have Huge Fight Over Cristiano Ronaldo
Football
2 months ago
By Eoin Harrington
Against The Toughest Of Opposition, Duffy And Coleman Shone In Dublin On Thursday Night
Previous Next