Joxer Goes To Stuttgart - Where Are They Now?

It's somehow 33 years since Joxer, Whacker, the German's daughter - those children of '88 - became household names thanks to the wonderful Christy Moore.

The ridiculously entertaining Christy wouldn't be so craven as to release a sequel with the same characters.

But here is what Joxer and co have gotten up to in the intervening years. 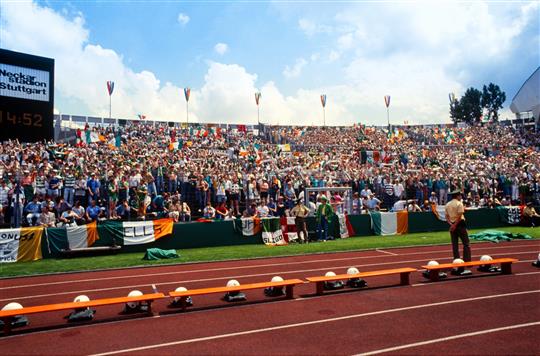 Having never set foot outside of Inchicore prior to Euro '88, Whacker acquired a taste for travel and adventure.

He returned to Stuttgart in late 1989, establishing an Irish themed pub on the back of funds accrued from winning the St. Pat's annual draw.

The pub turned into a roaring success, leading to the development of a chain of pubs across the continent.

Emboldened, Whacker dived head-first into the property market, buying places in the south of Germany, Dubai and Bulgaria.

His portfolio also included properties in Ballsbridge and Ashtown, and he briefly considered buying the Patriot's Inn in Inchicore (for sentimental reasons), the place where he first bumped into his good friend Joxer, though they don't see each other much now.

In the summer of 2002, while finalising a deal to buy significant shares in Mitsubishi, he attended Ireland's game against Saudi Arabia in that year's World Cup. His personal secretary informed him of the players' names as he went.

He told the Irish Independent in 2006 that he 'generally prefers rugby now' and was a Leinster season ticket holder.

Later that year, he was published in the Irish Times ("not bad for a lad from Inchicore," as he would tell his mother in a folksy voice), where he wrote an op-ed labelling Professor Morgan Kelly of UCD 'a clown' and 'a disgrace' and saying that Bertie Ahern should 'seriously consider deporting him'.

Having spent the early part of 2008 advising Sean Quinn to go big on the CFDs with Anglo - "when you risk big, you win big, Sean" - he was a major casualty of the 2008 crisis, seeing the value of his investments plummet in late '08 and into '09.

In 2013, his home in Sutton was seized by the bank, amid a huge media firestorm and a protest by the Land League.

After the eviction, he made a tearful oration to his followers, announcing that they had fought the good fight against powerful forces and that Jerry Beades was a greater man in his eyes than Michael Davitt. His speech was ridiculed by Vincent Browne on TV3.

As the Irish Times report on his fall from grace noted, 'he is now currently residing with his mother in Inchicore'.

The old Bedford from Tralee 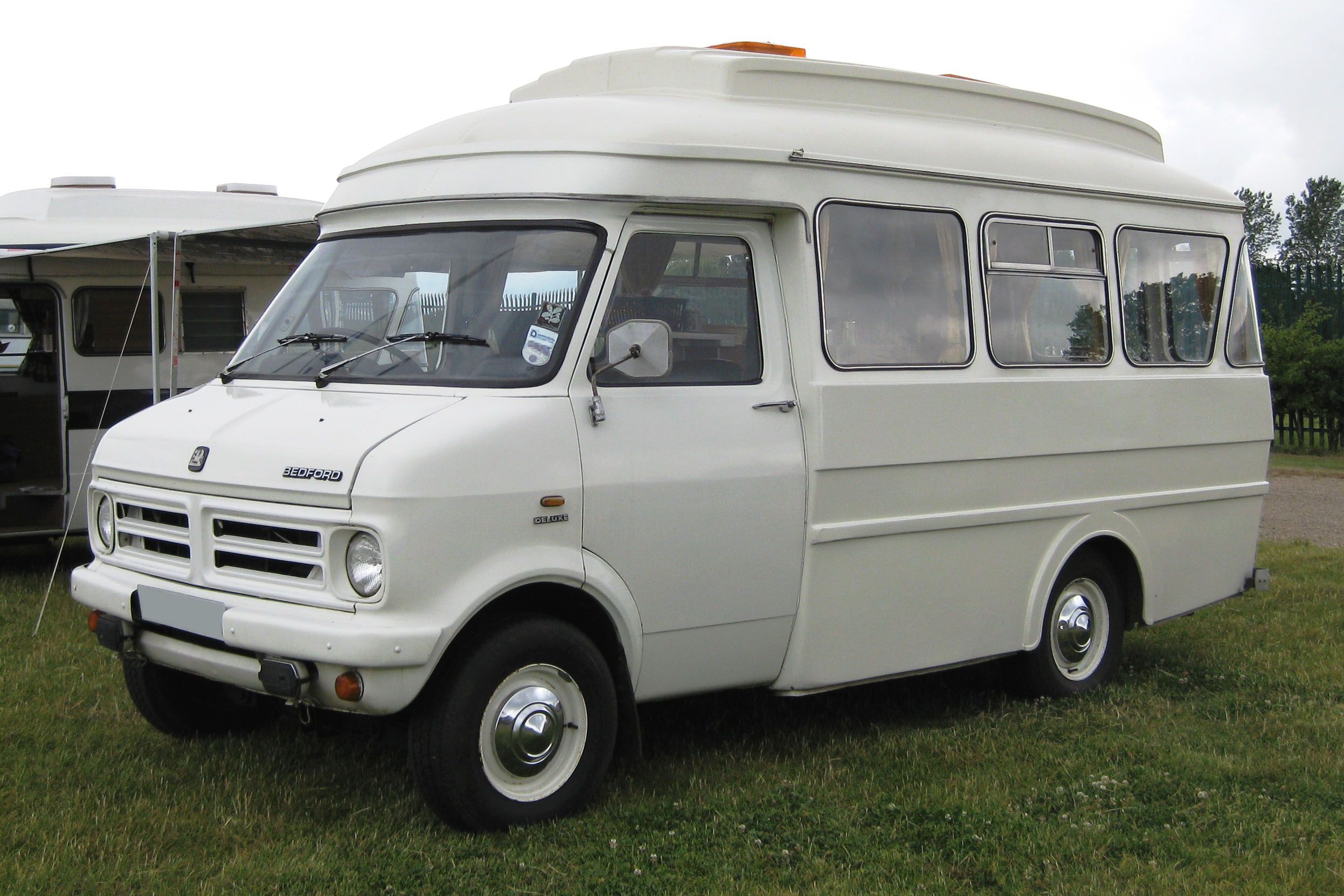 The old Bedford from Tralee sat idle in a field in Ventry for many years.

It's 'big break' would come in 2014 when Jeremy Clarkson drove it around the Ring of Kerry in a Top Gear challenge against Richard 'the Hamster' Hammond who was driving a modern Ford campervan.

Midway through their jaunt, they took in a local Gaelic football match between Dingle and East Kerry, during which Clarkson made a crack about cavemen battering one another and inquired whether the winning team was rewarded with a sack of potatoes.

A complaint of racism was later upheld by the UK broadcasting authority, Ofcom.

The slot was to end in tragedy. There were still a few tins of Harp purchased from the Duty-Free on Brittany Ferries lying around out the back.

After gasping at the best before date, Clarkson cracked into them in the interests of some on-camera bantz.

However, they went to his head and he ended up laying out one of his lowly paid underlings with a stiff-armed punch.

A versatile old bird, it has since rebranded itself as a burrito van in Stoneybatter.

It was recently ranked the '27th best Burrito Van in Dublin 7' by Lovin' Dublin. 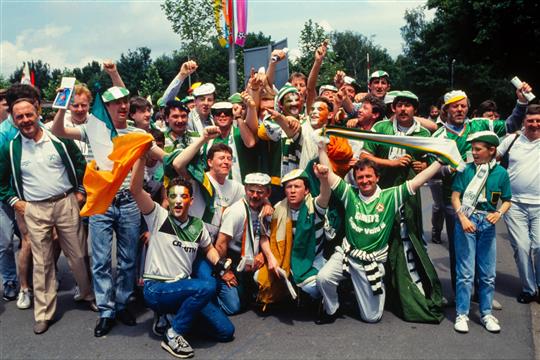 Joxer was bedazzled by his fame following the release of the Christy Moore song.

He initially proposed to cash in on this fame by running a 'Joxer Reality Tour' around his old haunts in Ballyfermot, Ballybough and Ballymun.

This failed to get off the ground because erstwhile home bird Whacker decided his fortune lay back in Stuttgart.

Previously ignorant of the great man's work, he became increasingly fanatical about Christy. And after being moved to tears by an especially stirring rendition of 'Viva La Quinta Brigada', he resolved to dedicate himself to radical causes.

Attending the World Cup in Italia 90, he was disgusted by the sight of Charlie Haughey holding aloft the Irish flag in the Olympic Stadium and his enthusiasm for the Irish football team, and for professional sport in general, was greatly diminished.

Heavily political he became a fixture at protest demos all over Ireland, from Dublin to Rossport.

The announcement that Denis O'Brien would part-fund the Irish manager's salary revived his interest in football. He now supports anyone but Ireland at international level. He has already bought a Sweden jersey for Euro 2016.

In a protest at a Fianna Fáil Ard Fheis in Killarney, he was detained after throwing an egg from close range at FF benefactor and former friend 'Whacker'.

Whacker responded by clocking Joxer in the face and a scuffle ensued.

In 2015, he was jailed for the non-payment of water charges, becoming something of a cause celebre on the internet.

On his release, he launched his own youtube channel in which he confronted politicians, hitting them square between the eyes with such intellectually stimulating arguments as 'yiz have let the country down, yiz tramps, ye should be in jail!'

He was a prominent leader in the 'Showdown at Jobstown' when a government minister was locked in her car for four hours.

One of the most uncompromising figures at the protest, when the question was asked, 'will we let her go?', Joxer could be heard on the Six One News shouting back 'will we fuck!'

After the protest, he wrote to Christy Moore asking him would he think of writing a song about Jobstown, even going so far as to suggest a few lyrics.

Christy has yet to respond.

He was elected as a TD for Dublin South Central at the 2016 General Election, hollering 'POWER TO THE PEOPLE!! FUCK ENDA KENNY' as he was hoisted up by his jubilant supporters, leading Brian Dobson to apologise to viewers at home.

Three months later, he accepted a position as a junior minister in the Fine Gael-led government.

The German's daughter from the banks of the River Rhine 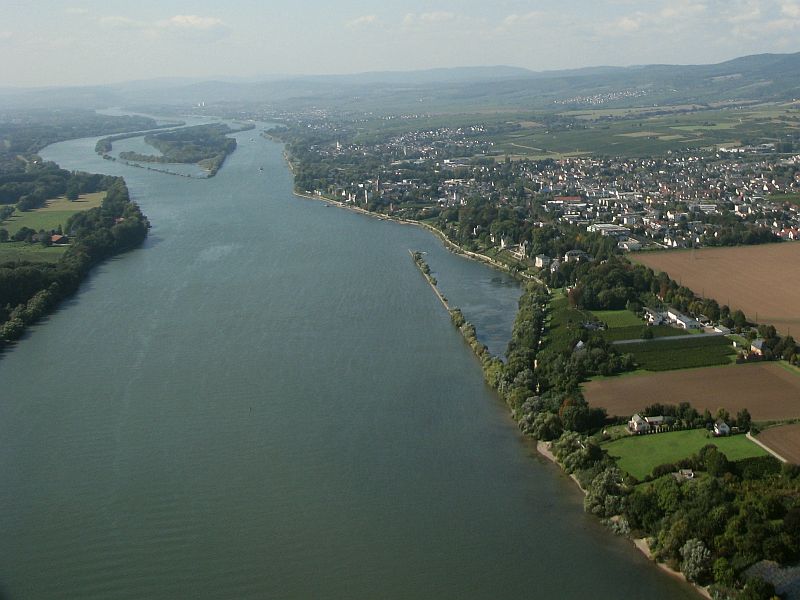 It didn't work out for the German's daughter in Ballyfermot, who found her new surroundings a bit of culture shock compared with her previous life by the banks of the Rhine. She also found Joxer increasingly hard to stomach, it has to be said.

Unfortunately, she was no longer on speaking terms with her father after her abrupt decision to travel to Ireland and shack up with a football supporter who she only knew by nickname, a decision which he found incomprehensible.

On her return, she knuckled down, gaining a degree in Finance from the University of Cologne. Thereafter, she secured a job in the Bundesbank.

In 2008, nineteen years after leaving 'Ballyer' for good, she returned to Ireland in the company of Ajai Chopra and Olli Rehn as a member of the troika.

Her past life in Ballyfermot was completely missed by the Irish media at the time, and only came to light in an interview she gave to 'Das Bild' later on. 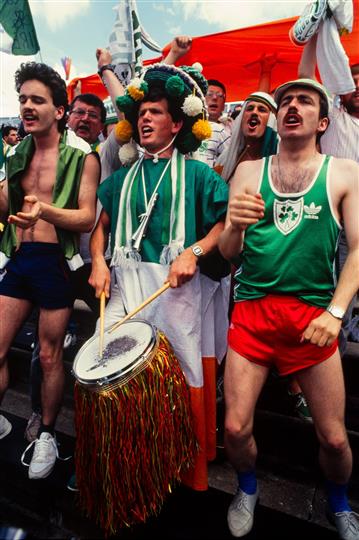 Minor characters in the Joxer story, Sean Óg and Peter formed a band, going on to represent Ireland in the Eurovision in the late nineties.

Choosing a male duo was an attempt to replicate the success of Charlie McGettigan and Paul Harrington at the 1994 Eurovision.

However, it failed dismally, with their song, 'And sure didn't we beat the pricks 1-0 after all', played on a banjo and mandolin, securing 'nil pois' from the United Kingdom jury.

A host of other juries gave the song 'nil pois' on musical grounds.

They finished bottom of the table and the song has been widely blamed by Eurovision scholars for kick-starting Ireland's current losing streak in the competition.

See also: Where Are They Now? - The Ireland Fans At The Walkinstown Roundabout In 1990

Football
1 year ago
By Mark Farrelly
Paul McGrath Picked An Irish Football Classic On Des's Island Discs
Football
5 years ago
By Gavan Casey
Watch: Christy Moore Whet The Appetite For Euro 2016 With A Late Late Rendition Of 'Joxer'
Previous Next

Football
1 year ago
By Mark Farrelly
Paul McGrath Picked An Irish Football Classic On Des's Island Discs
Football
5 years ago
By Gavan Casey
Watch: Christy Moore Whet The Appetite For Euro 2016 With A Late Late Rendition Of 'Joxer'
Popular on Balls
GAA
2 days ago
By PJ Browne
Insane Drama As Late TJ Reid Goal Sends Ballyhale Into All-Ireland Final
Rugby
1 day ago
By Colman Stanley
Yesterday Was Not The First Time Wayne Barnes Sent A Player Off For Getting Lippy
Rugby
22 hours ago
By Colman Stanley
Champions Cup Predictions And Permutations For The Irish Provinces
The Rewind
2 days ago
By Jonathan Byrne
The Definitive Ranking: Deli Items Ranked From Best To Worst