Earlier this month, Leo Gaxha put pen to paper on his first professional contract with Sheffield United. The teenager, who is from Kerry, has been with the Premier League club's academy for the past two years.

Back home in Tralee amid the Covid-19 crisis, Gaxha has been training in anticipation of soon returning to England to continue his career. While doing so, the striker - whose parents are originally from Albania and moved to Ireland more than 20 years - was the subject of racist abuse.

"At the start, I went and trained at the KDL [facility]; for the first few days, I was allowed to train there," the Ireland underage international told Eamonn Hickson on Radio Kerry's Terrace Talk.

"It got to one day, I went and trained there and I was told to get off the pitch. There were other kids there as well, I said to myself that I wasn't going to argue.

"So, I just went to Dynamos to train. While I was there, training away and minding my own business - I'm not going to name his name because he's probably listening to this - a certain man decides to come over, says some stuff to me and then decides to racially abuse me.

"He told me to go back to my own country and I'm there thinking to myself, 'What's my country? I was born here, raised here. I've represented this country five times'. I'm Irish as far as I'm concerned. It's 2020, times have got to change.

"I was shocked, but at the same time, I didn't argue with the man. I said, 'Listen, he might be having a bad day'. It's unacceptable to racially abuse people but I said I wasn't going to say anything to him.

"When he went away, I just said to myself that makes me stronger because if people are saying to me, they must be saying it for a reason, they must hate me for a reason.

"That's going to give me a bit of fire. That's still at the back of my mind. That will stay with me for the rest of my life. Not only was I there but I had a little brother who's nine-years-old there watching me train. That's going to stay with me for life. When I do play, and I will play in the Premier League, that will be a big factor for me - that's pushed me, made me angry and train hard to prove people wrong.

"I'm not a person to hold grudges, I'll take apologies, but for Kerry soccer, it's unacceptable; I want to see Kerry soccer in the next 10-15 years [with] more kids like me getting an opportunity to realise their dreams.

"It's the best thing that can happen to a kid, to go over to England and play professionally. It's everyone's dream to play in the Premier League. That's why I want Kerry to succeed.

"For me, the biggest pride will be playing in the Premier League and saying that I'm a proud Kerryman." 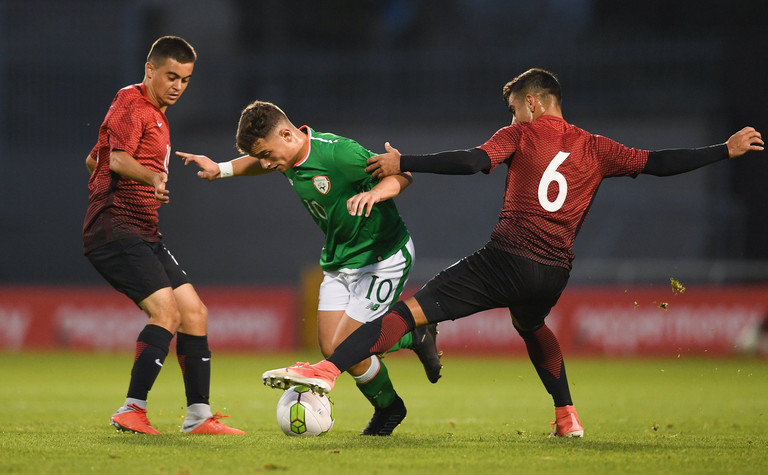 Leo's father, Lulzim, added that they wished to move on from the incident.

"We forgive things," he said.

"We're going to leave that behind. Even Leo's agent got involved; he wrapped up everything and was ready to send it to the right places but we just said to him, 'Look, leave it because anyone can have a bad day'."

Gaxha played for Kingdom Boys, Tralee Dynamos and Park before being offered a trial by Burnley a few years back. He travelled over, took part in a game against Sheffield United, and scored the winner in a 3-2 victory.

Burnley offered him a deal, and he was close to signing it, but Sheffield United's academy manager got in touch one evening as father and son sat in the kitchen of their Tralee home. Sheffield United had also been impressed by his performance in the trial and wanted to sign him.

"It was just around just before Christmas time, just before the season went on a break," said Gaxha about his first trip over to Sheffield.

"I just literally went to look at the place, at the training pitches. While I was there, I didn't have to train because they wanted me straight away. I asked if I could go and train. The U18s weren't training at the time so I had to train with the U23s. I was just turned 15 at the time. I was training with some first-team players. It was unbelievable.

"To be fair, I did better than I expected. Coming from Kerry, the standard is good, but they play so much faster, they're physically better and stronger. I coped with it really well.

"I was on a two-year scholarship when they signed me, a youth team contract. Everything is done now [with the pro contract]. When they offered it to me, I said yes straight away because it's a club I believe I can develop at and can play in the first team next season.

Gaxha has played for the Sheffield United U23s and says he will be with them for pre-season.

"I'll have a few training sessions with the first team," he added.

HIGHLIGHTS | An early @Ryan_Viggars header and 2 strikes from Leo Gaxha secured a sixth straight win for the Under 18s on Saturday.#SUFC 🔴 pic.twitter.com/B893PkQVH8