Martin O'Neill Explains How His Dynamic With Roy Keane Worked

Former Republic of Ireland manager Martin O'Neill has explained how his partnership with Roy Keane worked while they were over the national team.

The pair stood down in November 2016 after a mixed campaign. They successfully secured European Championships qualification in 2016 before failing to win a game in the following Nations League campaign.

Speaking on the 'A Pint With Eamonn' podcast, O'Neill explained the dynamic with his assistant during their stint.

When asked who addressed players during games, he said he would always take charge.

I speak. I am the manager. That is very important. Once I have spoken, I think you should allow it to settle down. Then if there are little points players want to make or the assistant manager, in the case of Roy, wants to make, fine. But he is not ripping into players immediately because if that is the case, I might as well make myself redundant.

O'Neill has not worked in football since he left Nottingham Forest last summer but he did clarify he is still keen on a return to management.

"I am between jobs. I obviously have enjoyed a great time in football and I don't think it has ended yet." 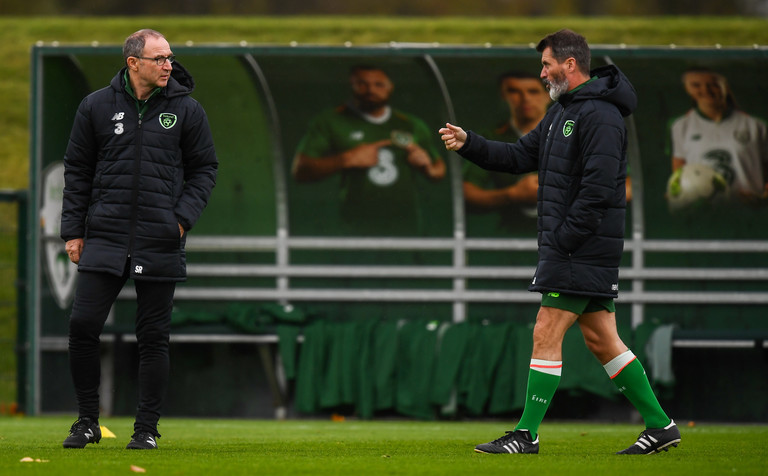 As to whether he prefers working with a club or country, O'Neill hinted at more complexities on the international scene.

"I have lucky to have been involved in both but the very obvious difference between the two is the length of time you have with the players.

"It is very little time you have as an international manager, every time you meet up you are hoping your best players are available for that time and that is not always the case."

O'Neill had been linked with the vacant Newcastle United job before the Premier League club appointed Steve Bruce. As for Roy Keane, he has also declared his interest in returning to management.

SEE ALSO: 'That Is The Difference' - Critical Walters Points At Key Mistake As Ireland Fall Short

Football
1 day ago
By Eoin Harrington
Alan Shearer Says Roy Keane "Ran Away" From Him After Famous Clash
Football
3 days ago
By Gary Connaughton
Gerard Pique Recalls Feeling The Wrath Of Roy Keane As A 17-Year Old At Man United
Football
1 week ago
By Gary Connaughton
Report: Roy Keane Won't Go For Hibernian Job Due To Club's Transfer Policy
Popular on Balls
Rugby
1 day ago
By Colman Stanley
'I Think Munster Softened Them Up For Us': Sexton Not Carried Away After Clincial Leinster Win
GAA
2 days ago
By PJ Browne
Mayo's Padraig O'Hora Using Football To Promote His Real Passion
Rugby
16 hours ago
By Colman Stanley
'That Pace, That Intensity, That Organisation' All Black Legend Has High Praise For Leinster
The Rewind
1 day ago
By Eoin Harrington
Watch: Brilliant Dermot Morgan Dublin Segment From 'The Travel Show' Resurfaces