Well that was a tough watch. Job done for Ireland in terms of results and points as we break for the summer, but the manner of the performance in tonight's 2-0 win over Gibraltar at the Aviva Stadium has left some feeling strangely downbeat despite the fact they are of top of the group after four games.

The encouraging showings against Georgia and Denmark have been sandwiched either side of two laboured victories over the 195th ranked team in the world, both of which harked back to the gloomy days of the late Martin O'Neill era in terms of performance levels. 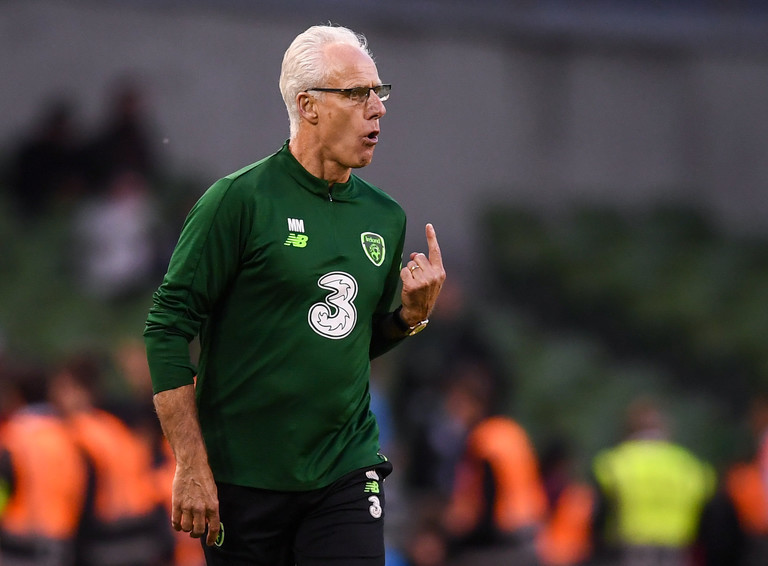 The away performance in Gibraltar could possibly be put down to the difficult conditions and a lack of cohesion given it was Mick McCarthy's first game back in charge, but the performance tonight has less mitigating factors.

Despite a stuttering performance against Gibraltar Ireland manager Mick McCarthy insists they're exactly where he wants them to be - at the top of Group D. #rtesoccer pic.twitter.com/y1i4qHC8Ib

For McCarthy however, he was in no mood to engage in any negative thinking and is happy with his return of 10 points from the opening four games. When speaking to RTE's Tony O'Donoghue shortly after the game, Mick was very much of the opinion that it was a case of 'job done.' Now off to the beach and we'll be ready for Switzerland come September.

It feels great. I'm going on my holidays with ten points. I guess that was the total I had in my mind when we started, win those three games, a draw in Denmark. I'm happy.

What's really disappointing is I had a bunch of lads come in there and it felt like we'd lost. The dressing room is all quiet, I said 'what's wrong with ya?' We got the points we wanted to get.

When asked if he was worried by the apparent lack of creativity, a slightly irritated McCarthy still managed to respond in a more amusing way than how we had become accustomed to seeing his predecessor react when faced with such questioning.

Isn't it interesting the way we've played better against the tough tests. Played really well against Georgia, beat them. Had a really good performance there (in Denmark) the other night, got a great point. I'm not worried about this. We'll play better against them. I'm not coming here and being miserable.

If you all want me to be that, unlucky, I'm smiling here, we've won, ten points, see ya. And they're all in my pocket by the way and I'm not giving any of them back.

Football
7 months ago
By Gary Connaughton
'It Didn't Work, The Shape Of The Team Didn't Work' - Doherty & Coleman Repeat Unlikely
Previous Next