"Man learns through experience, and the spiritual path is full of different kinds of experiences. He will encounter many difficulties and obstacles, and they are the very experiences he needs to encourage and complete the cleansing process." - Indian guru and philanthropist Sai Baba on the time he wore Predator Mania astro turfs to his Communion

Where finding a dress presents its own rigours, shopping for Communion clothes for a boy is an absolute pain in the hoop for parents across the nation. In fact, Communions themselves are a fecking dose, and the fact that they now come with mandatory pre-seasons masses in some parishes only exacerbates the underlying torment of having a child in first or second class.

While the passive-aggressive parental competition continues apace on the dress front, a number of schools in Ireland have introduced a uniform system of some description for the lads; robes have replaced Communion outfits for the young bucks, which prevents prospective squabbles over whose clothes are better, and levels the sartorial playing field regardless of a family's financial background.

The only variable, then, are the boys' shoes - probably the only piece of clothing lads aged seven, eight or nine could give a baker's shite about.

However, every so often, one particular type of shoe will spread like wildfire throughout a classroom, and indeed the primary school students throughout the country, becoming a uniform in itself. In 2008, it was the return of the Nike Airmax 90. In 2005, it was the Adidas Goodyear.

My esteemed colleague Mikey Traynor has in the past correctly ascertained that the 2002 Preds were the greatest football boots of all time, but their sister shoe remain arguably the most underrated piece of sports apparel to reach Ireland since we discovered the gumshield in the late '80s.

And while astro turfs might not be considered quintessential church wear - not least for a Communion - a full generation of lads managed to convince their parents that Pred astros were basically just ordinary runners, and so waltzed in to accept their Lord and Saviour Jesus Christ looking like they'd come straight from a game of five-a-side.

Here's why they made for the perfect Communion shoe:

They were a reasonably priced fashion statement 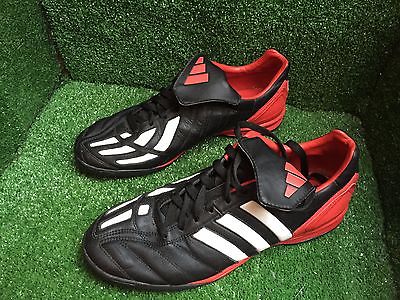 Having doubtless been brought into Clark's by your incredibly angry mother to try on an abominable pair of 50-bob, buckle-laden clogs, a counter-trip to Champion, Elverys or Cummins presented her with a cheap alternative - and one which would crucially end your whingeing.

Add to this your argument that, 'Everyone in the class has them,' along with the fact that this was the last piece of Communion wear on her list, and there was every chance that you'd break her will. You'd already met her halfway when you agreed to wear a gaudy waistcoat. This was your reward. 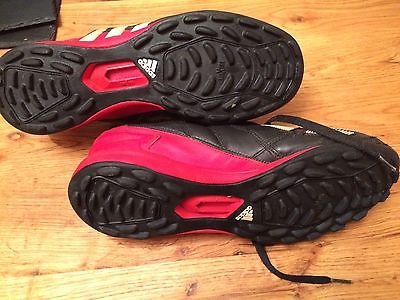 The aforementioned Adidas Goodyears, despite having literal tires for soles, didn't have a patch on the all-surface grip of their older cousins.

If anything, Astro Preds were so safe they were dangerous. A sudden stop on a frictional surface could result in anything from a mildly twisted ankle to a broken tibia.

Crucially, however, their rubber-studded surface stood you in good stead when you were sprinting around your garden for no reason other than your being eight years old.

No matter the location, you were always 100% ready to play ball 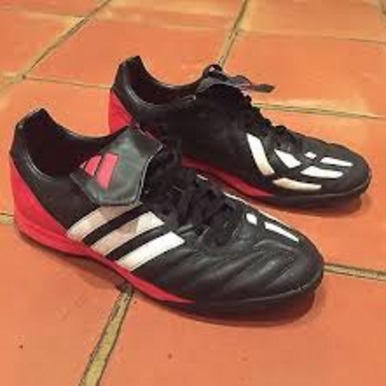 As was so often the case at Communion after-parties, the adults would enjoy themselves more so than the children - particularly if the weather stayed fine and they could get outside for a bit.

Inevitably, at some stage during the day, a football would roll your way - usually with your Heineken-wielding uncle beckoning you on from a crouched position, looking oddly determined to prevent you from scoring against the wall behind him.

What he would fail to account for, however, was your shoe's 'Precision Strike Zone' - aka 'the curly bits', and the remarkable confidence your astro Preds provided you with as soon as you found yourself in a yard of space. Having bent the ball past him with minimal fuss, you went about your day collecting money, while he was left to ponder the merit of his invitation to shoot while you were so conspicuously equipped to do damage.

They were the most comfortable astros ever 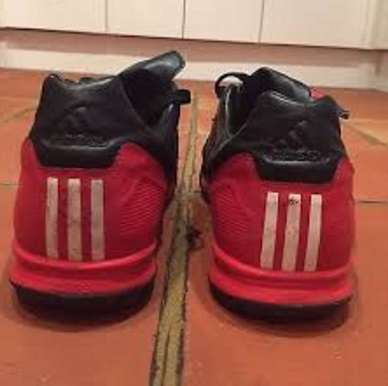 Despite essentially being a more rubbery version of the Adidas Predator Mania boot, astro Preds were extraordinarily comfortable. The seemed to almost mould around the shape of your foot long before Nike and other brands introduced such technology.

They were extremely light, of course, as you'd discover when they were torn to shreds a mere six weeks later, but for a short period they acted as gloves for your feet. If gloves made you absolutely lethal at football, that is.

The utterly ingenious lack of the coveted red tongue 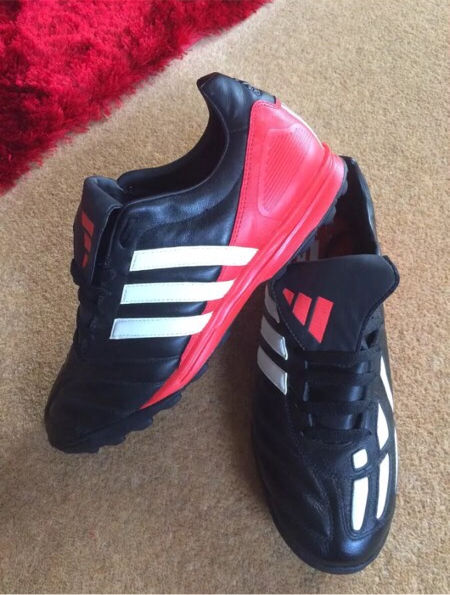 While the iconic red tongue and elastic strap was the cornerstone of the 2002 boot, the lack thereof on its astro sibling was a stroke of genius by Adidas marketers.

The more curt, black tongue and red Adidas imprint was a far more subtle feature, and crucially allowed astro preds to just about pass for ordinary runners in the eyes of beleaguered parents. The red tongue might well have been a step too far for mothers and fathers envisaging the shoes beneath the cuffs of a school tracksuit pants; too flashy, also, for a dressy event such as a Communion.

But its smaller black equivalent - most importantly of all - tipped the scales in favour of the astro Pred being perceived as a black shoe, and not a red shoe. As such, it just about became acceptable formal wear for children under 10, and thousands of them cantered down the aisles of Ireland's churches for the bones of two years.

SEE ALSO: 11 Reasons Why The 2002 Adidas Predator Mania Was The Best Football Boot Ever Made