The Sun's downright weird obsession with Raheem Sterling continued on Tuesday with the England and Man City footballer once again being featured on the newspaper's front page.

The 23-year-old was criticised for a new tattoo, one of a gun.

When I was two my father died from being gunned down to death I made a promise to myself I would never touch a gun in my life time, I shoot with my right foot so it has a deeper meaning N still unfinished.

With the World Cup looming, it's certainly a distraction which Sterling could do without and from a paper which will undoubtedly criticise the England team should they underperform at the tournament. 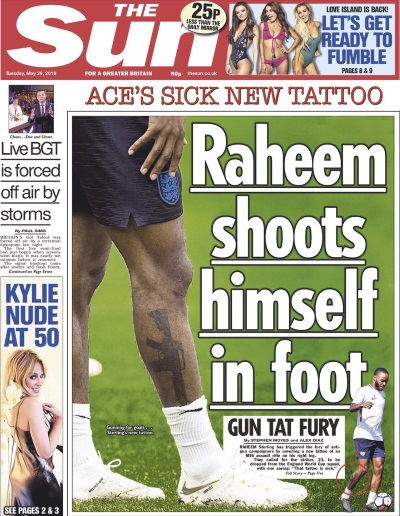 Previously, Sterling has been targeted by the paper - the Sun is not the only one either - for offences as such being tired and buying his mother a house.

Gary Lineker and many others have defended Sterling.

Unique to this country to attempt to destroy our players morale before a major tournament. It’s weird, unpatriotic and sad. https://t.co/vCfVTm9w0r

I like Raheem Sterling. Talented, determined footballer, role model for a lot of kids, a great success story. A gun tattoo doesn’t look like his greatest idea ever (and yes I read his Instagram post, which was very sad), but who actually cares? It’s a tattoo. Give him a break FFS

See Also: The Complete List Of Every Irishman Promoted This Season In English Football