At 8pm last night, players and management at Glasgow Rangers went on a one-week social media blackout. After another week of wretched social media racism towards footballers, blackouts are necessary acts  if the scourge of racism is ever going to confronted by platforms like Instagram and Twitter. Rangers have acted commendably in the aftermath of the vile treatment of Rangers' player Glen Kamara by Slavia Prague players ina Europa League tie a few weeks. Social media companies need to take so much responsibility in policing their platforms, and these boycotts will hopefully some day lead to a day when footballers can turn on their phones after a match and not encounter 70 racist messages, as Callum Robinson had to do on Saturday afternoon.

That said, we couldn't help but raise an eyebrow when we saw Rangers tweet their condolences for Prince Philip, who passed away today. A mere nineteen minutes after the Royal Family twitter account tweeted that Prince Phillip had died, the official Rangers account tweeted their 'deepest sympathies' to 'Her Majesty'.

Everyone at Rangers Football Club is saddened by the passing of Prince Philip, the Duke of Edinburgh.

Our deepest sympathies go to Her Majesty and the rest of the Royal Family. https://t.co/bLU1uxAYCI

We know that love for the royal family is embedded deeply in the DNA of this particular football club, but surely, today - 12 hours into an anti-racism social campaign! - was not the day to express sympathy on social media towards a well-known racist! Today is a sad for the family of the Duke of Edinburgh, and indeed sad day for many Britons, but there's no pussyfooting around this man's racism. Not that the British media and press haven't been doing so for the last 80 years, massaging awkwardly racist remarks made by the Duke of Edinburgh into 'gaffes'.

These comments chronicled in a 2017 Al Jazeera piece do not read well in the cold light of day.

“Still throwing spears?” (in Australia, to an Aboriginal Australian).

“If you stay here much longer you’ll all be slitty-eyed” (in China, to a British student)

Watch a British newsreader do his best to equivocate in the aftermath of Prince Philip's 'slitty eyes' remark during a visit to China.

Spitting Image got some mileage out of this... pic.twitter.com/yu2gzfuqvh

There's no denying Prince Philip was a racist. If Rangers are really serious in their support of anti-racism, they need to not only expect more from others. They need scrutinise their own sacred cows, even if it means alienating their own supporters.

After admirably supporting their own players when he was faced with the most naked form of racism, Rangers have let Glen Kamara down today in mourning racists in high places. 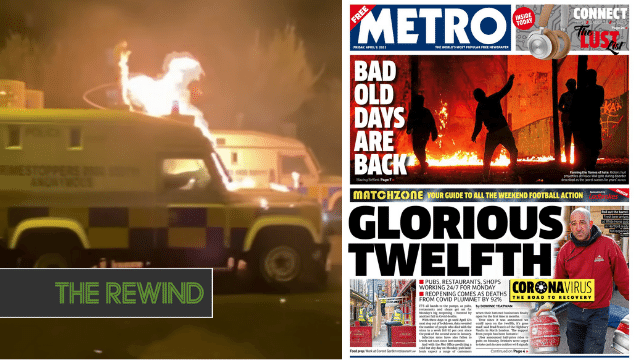