Stephen Ireland's Son Joshua Gets Republic Of Ireland U18 Call-Up

Stephen Ireland's son Joshua has been called up to the Republic of Ireland U18s side that will face Sweden in Marbella twice this week.

Head coach Colin O'Brien is not on his own in drafting Joshua into the international setup. U19 manager Tom Mohan included him in a training camp in May.

The 17-year-old has been playing his club football with Stoke City. Having been born and raised in England, he represented England at U15 level.

Joshua has made four appearances for Stoke's U18's this year. He's most often deployed similarly to his father in the centre of the park.

It seems he is a dab hand at set pieces, given this highlight from an Instagram post last year.

Colin O'Brien's squad last featured in a double-header friendly in August against Hungary. The first game ended in a 2-0 win, with the second a 2-2 draw.

Cathal Heffernan of Cork City is another name many will recognise in the squad. The defender is son of Irish Olympians Rob and Marian.

What's Dad Stephen up to now? He retired from the professional ranks in 2018 after moving from Stoke City to Bolton Wanderers.

Bolton were going through a financial crisis at the time, and Stephen didn't play a game for the first team, citing he had bonuses in his contract that they couldn't pay.

The Cork man spent his schoolboy days there and said it'll help develop talent in the area given there are four clubs in the locality.

The likes of Emile Heskey, Nedum Onuoha and Chris Eagles were some of the names that featured at the new pitch at Old Church Park.

Now that his playing days are over, Ireland is enjoying life as an agent. He says he manages his own son, Josh, as well as Cathal Heffernan and a few others in the Irish underage setup.

"My son is at Stoke," Ireland told The Mirror. I put on some extra sessions for some of his teammates, gave them an insight into football, into the dos and don'ts."

"I went through nutrition, sleep and recovery, the mental side of the game, their mental health and decision-making," Ireland said.

"It has evolved into me having two or three of the best young talents, I feel, in each club in the Manchester area - United, City, Liverpool, Everton, Burnley, Stoke, Bolton and Oldham."

"I have three or four in Ireland too. Cathal Heffernan is one of the boys. I’m even turning people away now." 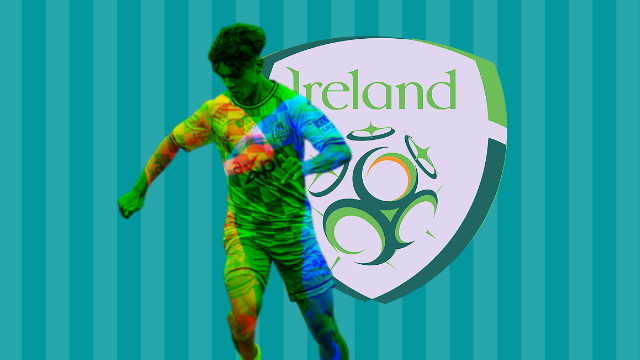 Football
13 hours ago
By Luke Delaney
Report: Real Madrid To Poach Aurelien Tchouameni Ahead Of Liverpool
Football
13 hours ago
By Colman Stanley
Rangers Fans Livid Over Appalling Conditions And Treatment At Europa League Final
Football
15 hours ago
By Eoin Harrington
Champions League Quiz: Name The Teams From The 2018 Real Madrid v Liverpool Final
Popular on Balls
Football
18 hours ago
By Colman Stanley
BBC Apologise After 'Manchester United Are Rubbish' Ticker Error
Football
1 day ago
By Gary Connaughton
Gary Neville Worried About Future Of Burnley After Relegation To Championship
GAA
2 days ago
By PJ Browne
Controversy In All-Ireland U20 Hurling Final Over Dubious Crucial Point
GAA
1 day ago
By PJ Browne
How A Kerry Guard Ended Up Playing For The Tipperary Footballers