Stephen Kenny has admitted that Aaron Connolly's career "has sort of stood still" due to his lack of game-time at Brighton this season.

Kenny was speaking at his pre-match press conference ahead of Ireland's World Cup qualifier away to Azerbaijan on Saturday before an international friendly against Qatar on Tuesday.

Connolly has made eight appearances for the Republic of Ireland national team but has yet to open his scoring account. Kenny is a big fan but admits that the striker must get more regular game-time if he wants to continue progressing in his career.

“I didn’t take him off because of injury {against Azerbaijan] but subsequently he did have a scan and had a muscle injury. That’s why he wasn’t involved in the second game [against Serbia]," Kenny told the media.

“He found it hard to get regular game time at Brighton, his career has sort of stood still over that period. When he burst on the scene he was in brilliant form for the Under-21 team, scored two on his debut." 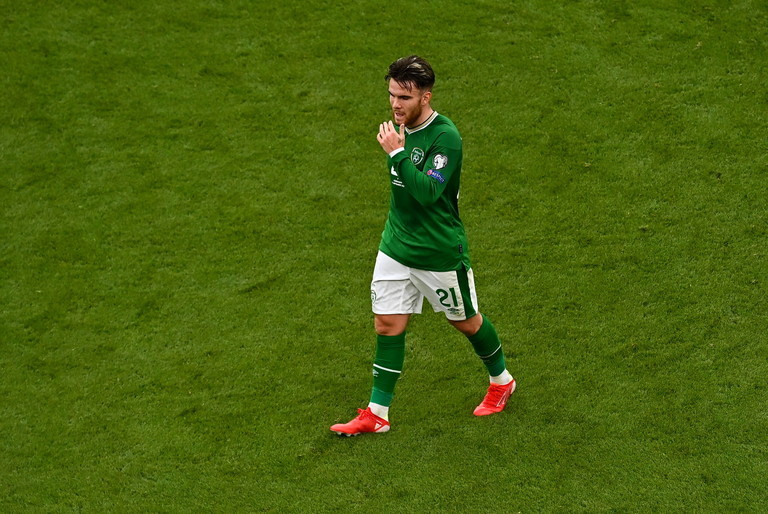 4 September 2021; Aaron Connolly during the qualifying match between Republic of Ireland and Azerbaijan at the Aviva Stadium. Photo by Eóin Noonan/Sportsfile

Connolly's has struggled for consistency since scoring those two goals against Tottenham in his first Premier League start, netting just three times in 38 subsequent league appearances.

However, he did score the only two goals in Brighton's 2-0 League Cup win over Swansea showing the talent is there to match the potential that Kenny and others see in Connolly. But, his international manager would like to see the 21-year-old go out on loan and play more regularly due to the fact he has only played 58 minutes in the Premier League this season.

“It’s not been easy for him since, to get back in," said Kenny.

"Sometimes they play with one striker, you’ve got two other international strikers playing ahead of him. You’ve got to wait for opportunities as well. He scored two goals in the Carabao Cup: I was at the game. Two good goals, but he’s not really figured since.

“Opportunities are difficult in the Premier League, some of the younger strikers get to go in the Championship on loan. We were looking at the Swedish Under-21 striker who was at Brighton who has got a lot of goals for Coventry, Viktor Gykores. He played against us in the Under-21s.

“He got an opportunity to go on loan in Europe [St Pauli of Germany] and come back to Championship. Sometimes staying still as a striker as a number three, it’s difficult to progress. Someone like Troy Parrott, even though he’s gone down to League One, he’s finding his feet, getting a few goals and learning the game.”

It remains to be seen whether Connolly will start on Saturday in what is a must-win game for Stephen Kenny given he has just one victory in 16 games in charge of the senior international side. With Adam Idah expected to lead the line, Callum Robinson back in the squad and Tory Parrot playing more regularly, Connolly may have to settle for a place on the bench. 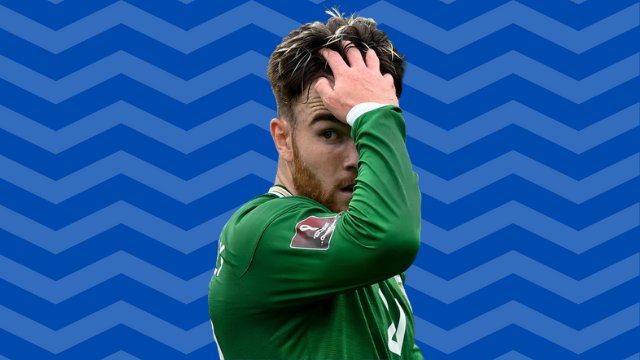 Football
4 months ago
By Gary Connaughton
Aaron Connolly Admits Criticism Has Affected Him After Brighton Departure
Football
4 months ago
By Gary Connaughton
Graham Potter Non-Committal On Aaron Connolly Future Ahead Of Loan Move
Football
5 months ago
By Jonathan Browne
Stephen Kenny Extols The Value Of Loan Spells For His Young Players
Popular on Balls
Football
1 day ago
By Eoin Harrington
'Ronaldo Is A Cod' - Remembering Eamon Dunphy's Infamous 2008 Rant
GAA
20 hours ago
By PJ Browne
The Draw Has Been Made For Tailteann Cup Opening Rounds
GAA
1 day ago
By PJ Browne
Donal Óg Cusack Defends Dublin Hurlers After John Mullane Criticism
The Rewind
2 days ago
By Eoin Harrington
Watch: Brilliant Dermot Morgan Dublin Segment From 'The Travel Show' Resurfaces