The Ireland Team We Want To See Face Switzerland... And The One That Will

Ireland face Switzerland in a vital Euro 2020 qualifier tomorrow, and the debate around what team should be selected is in full flow. We are unlikely to see major changes to Mick McCarthy's side, who has preached the importance of consistency and experience throughout the campaign.

We would like to see a change in system, one that fully unlocks the potential of our best players. But we don't think it will happen.

Here's the team we want to see take on the Swiss, and the one probably will.

The Ireland Team We Want To See

On The Balls.ie Football Show this week, the lads made an impassioned case as to why 3-5-2 should be Ireland's formation of choice.

Simply put, it is one that suits out most in-form players. The Sheffield United quartet in the squad thrive in this system each week, while other Irish players would be given the freedom to express themselves in a way they can't do when four play at the back. It also negates our lack of in-form wingers at the minute.

Nothing to see here, Randolph is still by far the best Irish goalkeeper out there at the minute.

Duffy has struggled slightly in a three at the back at Brighton this season, but you would imagine he would cope better at the lower pace of international football. 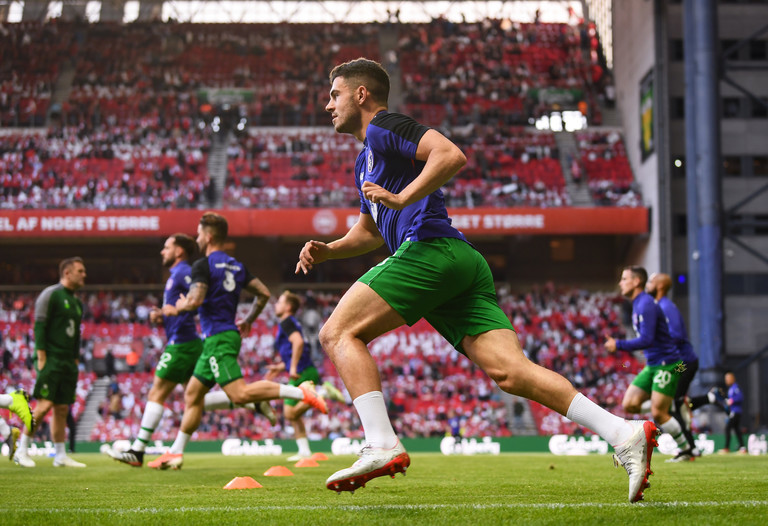 It is getting to the stage where John Egan's absence from the team is becoming indefensible. He has been an absolute rock a the back for Sheffield United for over 12 months, acting as the middle of a back three.

This excellent article goes into detail on how he is the key to their unique system, and you would expect he could have a similar impact for Ireland given the opportunity.

Keogh is still going strong for Derby despite his advancing years, and he has performed well in this qualification campaign. This could be a formidable back three, and would have no glaring weaknesses. The three players balance each other well and mix ball playing ability with defensive solidity.

If Matt Doherty were fit, we would have moved Coleman into the back three to accommodate the Wolves man at his best position. However, Coleman should be very effective operating at wing back.

He is excellent going forward, especially at international level. He also has the mobility to get up and down the pitch at a high pace for the full 90 minutes, a key requirement.

One of the main reasons for employing this system is to unlock the potential of Enda Stevens. Simply put, he has been absolutely phenomenal so far this season. Both in attack and defence, he stands out as one of the best fullbacks in the Premier League.

Let's be clear @Estevens1990 is a Top 10 Premier League player for full back or wing back.

Only 2 players have made more tackles

His assist for Callum Robinson at the weekend tells you everything you need to know about his season so far. He has yet to make that impact for Ireland and you would assume that is because he is played out of position.

We feel he should be given the opportunity to perform to the best of his capabilities in a green jersey..

Harry Arter and James McCarthy would have been possibilities for this role, but both have withdrawn from the squad. To be fair, Whelan has performed very well in this campaign so far. His experience will also be vital in such a big game. 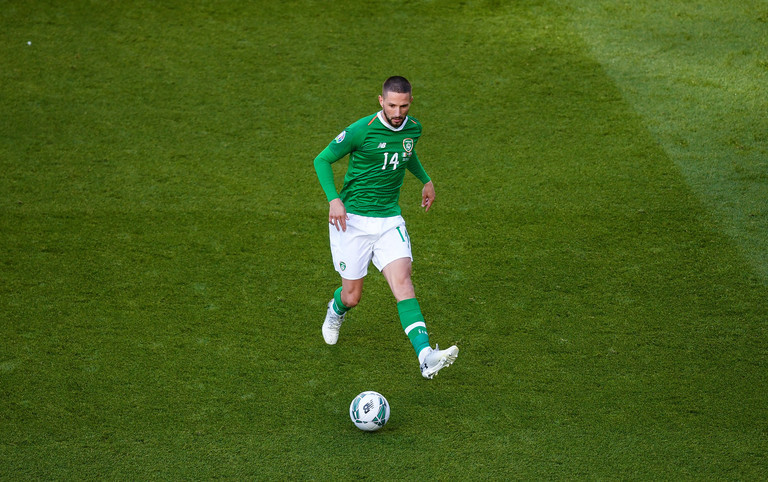 Hourihane has been perhaps Ireland's best player in this qualification campaign, with his performances in the first two games especially impressive. He is the type of midfielder Ireland have been lacking for years, one who can get the ball on the floor and dictate the pace of the game.

His inch-perfect set-piece deliveries are also a huge boost.

We have been crying out to see the Jeff Hendrick from Euro 2016 over the past few years, but there have been signs of improvement from the player. The first half against Georgia was the best we have seen him play for Ireland since that tournament, although he was poor against Gibraltar last time out.

A 3-5-2 system would allow Hendrick more freedom to advance up the pitch and he is at his most effective when operating in and around the box.

Robinson's form has been remarkable since returning to the Premier League and he has the potential to be Ireland's most important player over the remainder of the campaign. That's how good he has been.

He was out best player against Gibraltar, and while he played wide right in that game, he is at his most dangerous when operating through the middle. He has the ability to stretch the defence in behind, move from side to side and drop deep to get on the ball, just as he does for Sheffield United.

He is another player who could be unlocked in this system.

McGoldrick has been fantastic in this campaign, with only a goal lacking from his performances thus far. You get the feeling that will come.

He no doubt would love to have a partner up front, as he has been isolated at times in the four games so far. 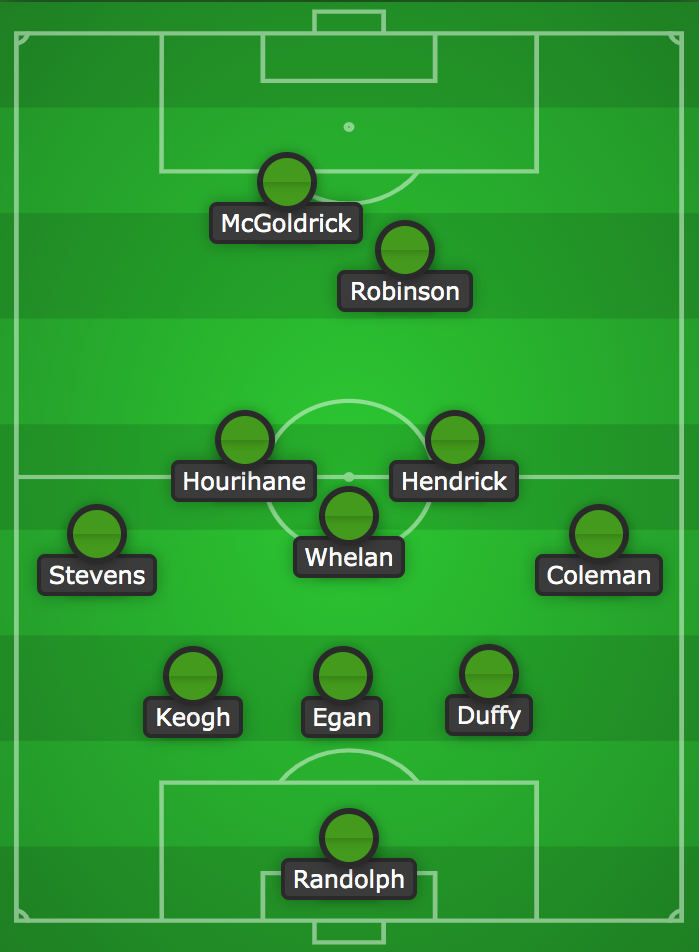 We would love to see this system tomorrow night, but it is unlikely to happen.

Here's what Mick McCarthy will most likely go with.

The Team That Will Probably Play

We would expect 10 of the 11 discussed above to start, with one exception. James McClean will likely replace John Egan, with no need for three centre backs in a 4-5-1 system.

The Stoke Man will operate from the left, with Robinson likely to play on the right. McGoldrick will be the lone striker. Enda Stevens will play as a more conventional left back, a role that is not as suited to his strengths going forward. 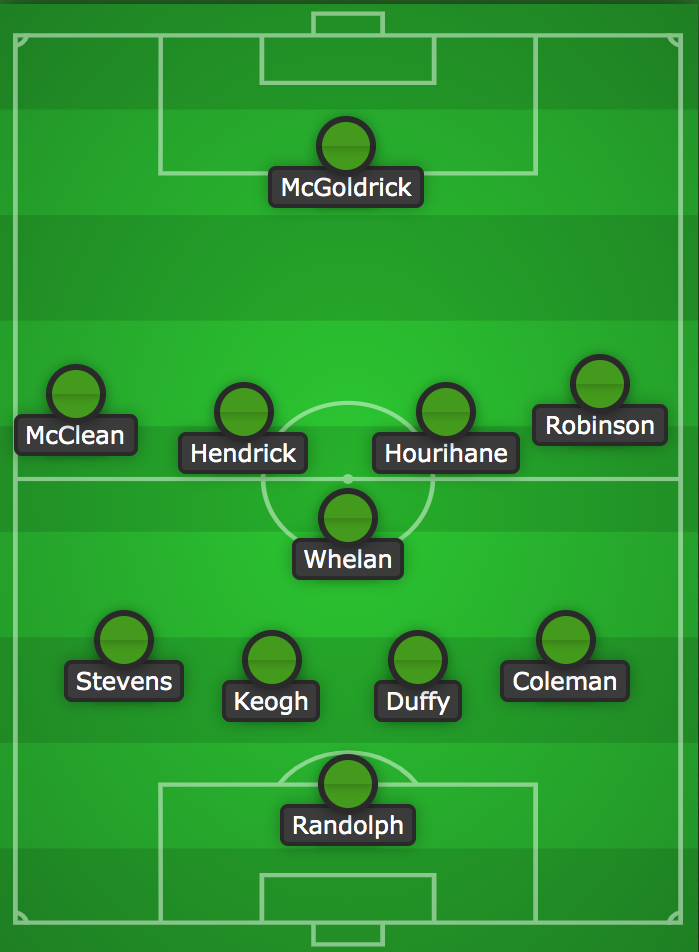 So there you have it. Which team would you prefer to see tomorrow night?