A month ago, a crack team of cultural historians were sifting through the rooms of the Saipan Hyatt Regency Hotel in search of artefacts that might transport us back to that turbulent month of May 2002.

After searching in vain for hours, they were startled to stumble upon an old phone wedged between a double bed and a bedside locker in one of the rooms. It had been missing for 18 years. On scanning the phone, they came upon an extraordinary WhatsApp group.

The group was entitled 'Where the Fuck is Saipan?'

It dawned on them that this was the WhatsApp group through which the Republic of Ireland players communicated with each other during those tumultuous days and hours.

The researchers were truly startled by the discovery, not least because it confounded prevailing assumptions about when exactly the WhatsApp app came on the market.

It is an incredible, first-hand account that shows what was going on in the minds of the players in one of the most momentous periods in Irish history.

The researchers have agreed to allow us publish the contents of the group. Fee undisclosed.

Here is a brief glossary explainer

Dino: Dean Kiely - A rather irreverent former Irish substitute keeper. Was the goalkeeper for Charlton Athletic at the time.

Kells: Gary Kelly - Venerable elder statesman of the team. In a former life was one of the three amigos.

Killer: Kevin Kilbane - Honest to God winger who played for Ireland for many years.

Reidy: Steven Reid - Rangy and talented player whose career was scarred by injuries. A late call up to the Ireland squad that year.

Triggs: Jason McAteer - Long-time international and scorer against Holland. Like all footballers not famed for intelligence, he acquired the nickname Trigger. Universally regarded as daft. Possibly plays up to this image.

And so without further ado, we present to you the 2002 World Cup in WhatsApp form (because it really hasn't been retold enough through various media already).

The team arrive on the island of Saipan only to find there is no gear, no kit, no footballs and the pitch is skank bad. 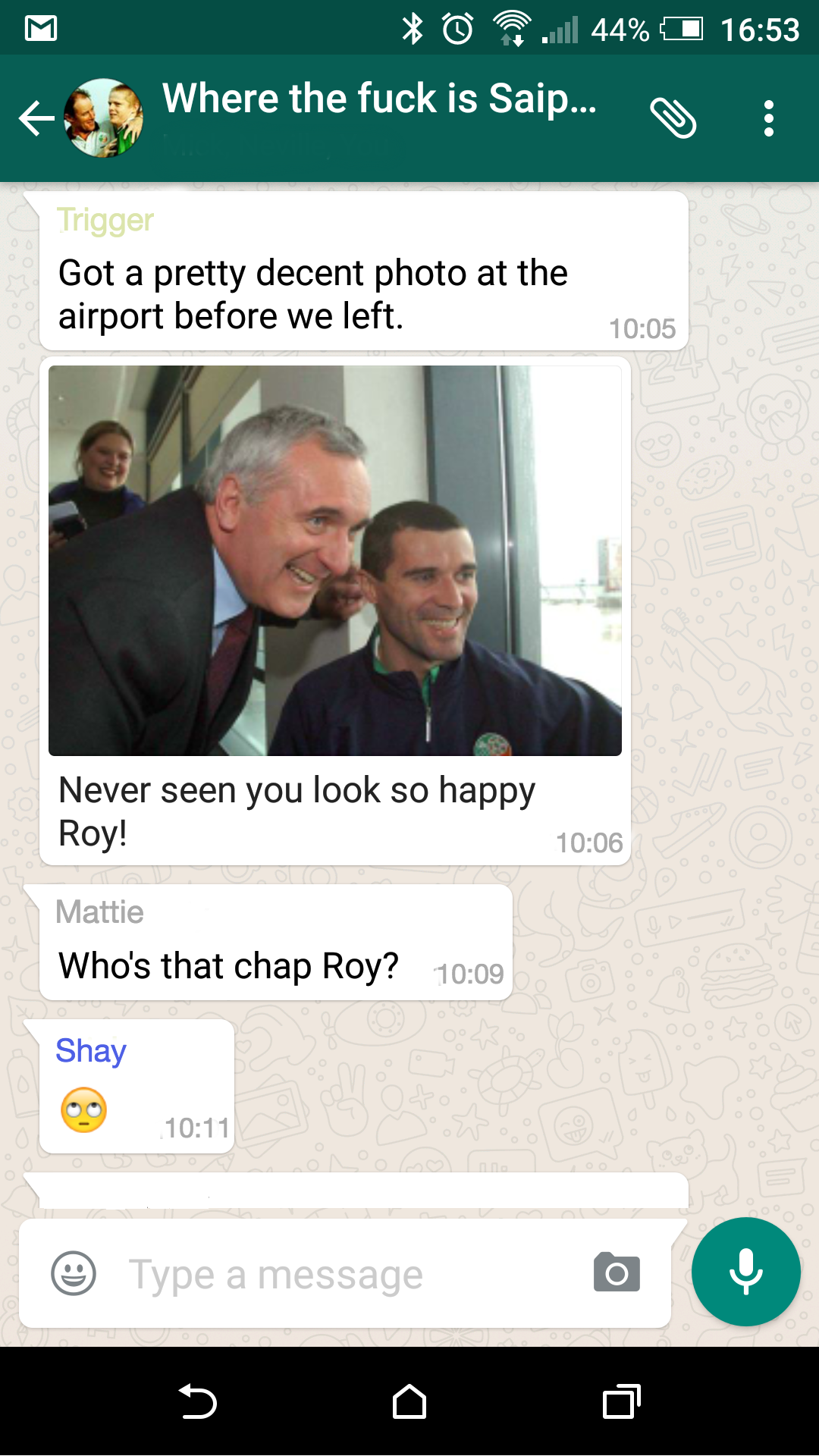 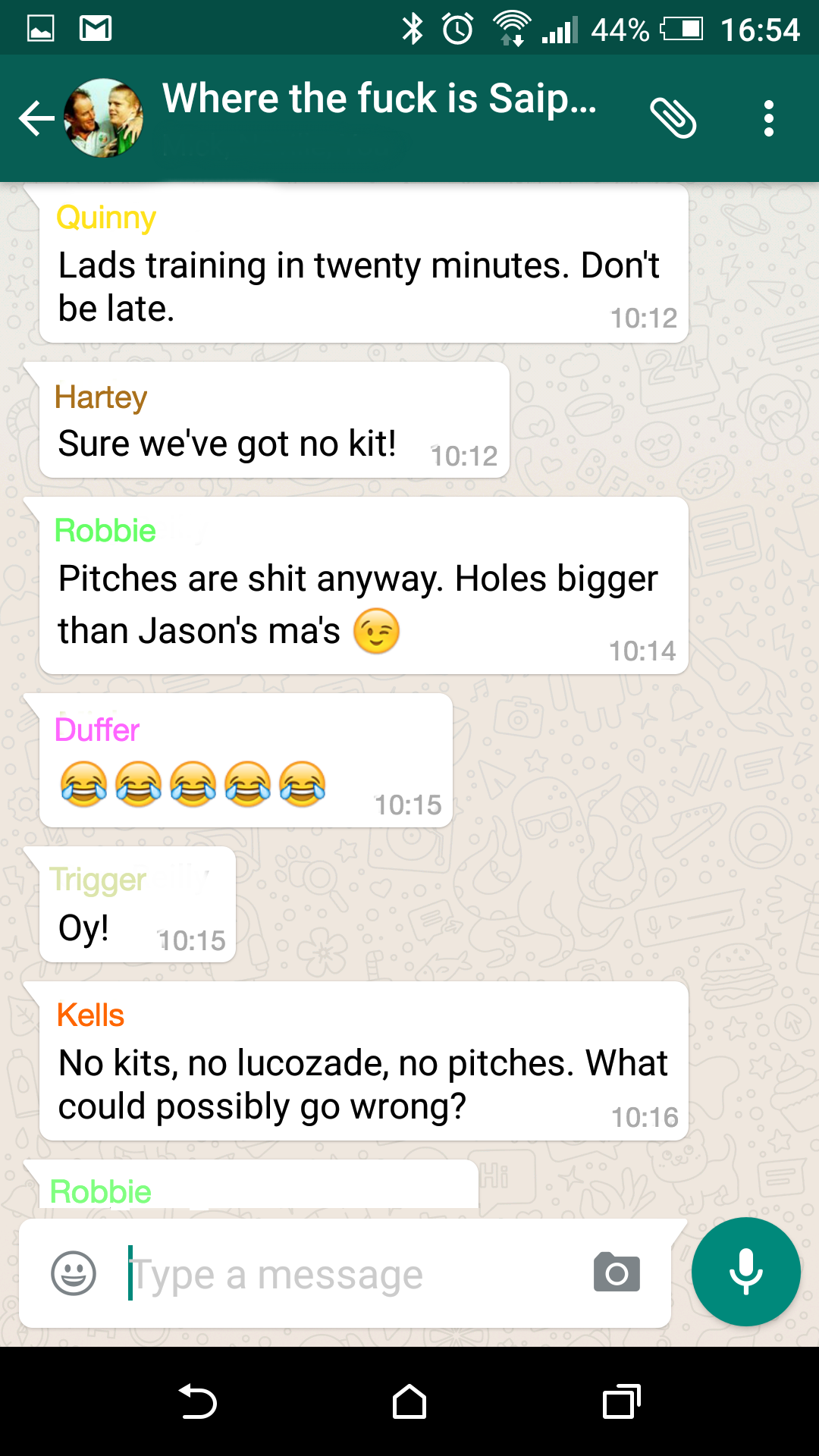 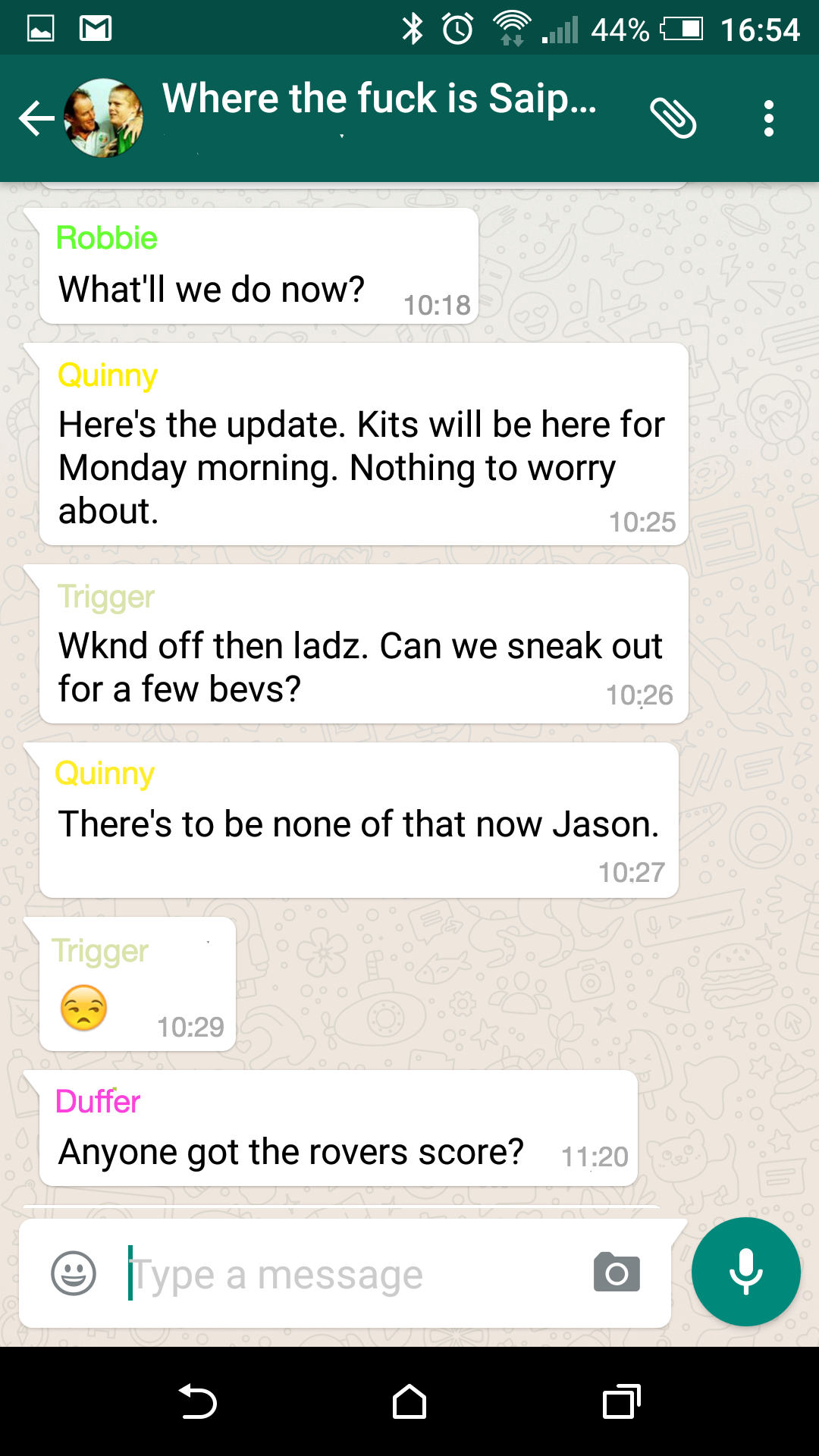 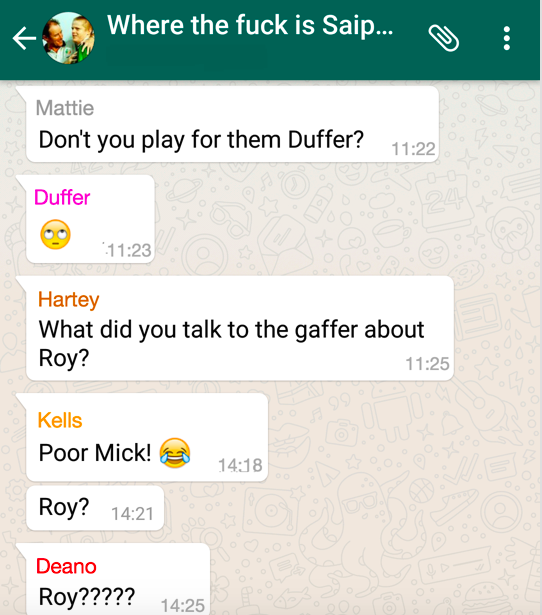 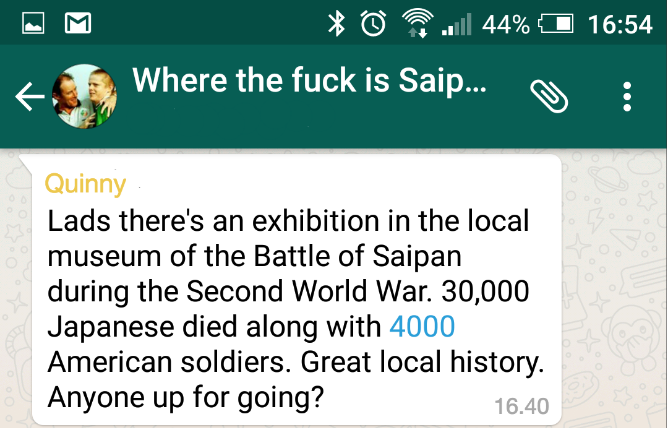 The team attempt to acclimatise to their new surroundings. It's a day of bus tours and golf. In the evening, in an attempt to foster good relations with the gentlemen of the press, manager Mick McCarthy organises a barbecue for the benefit of the players and the media. 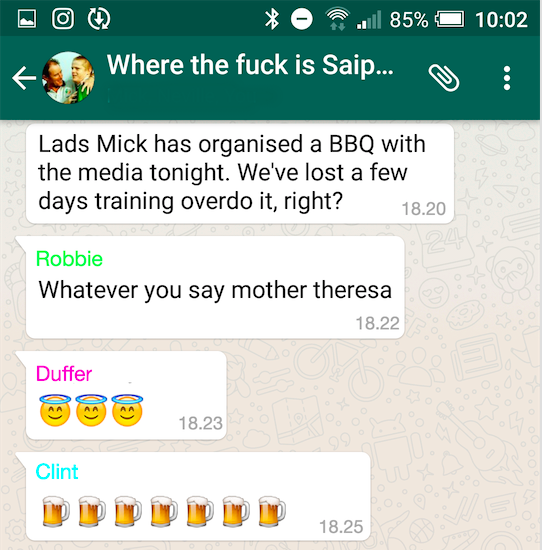 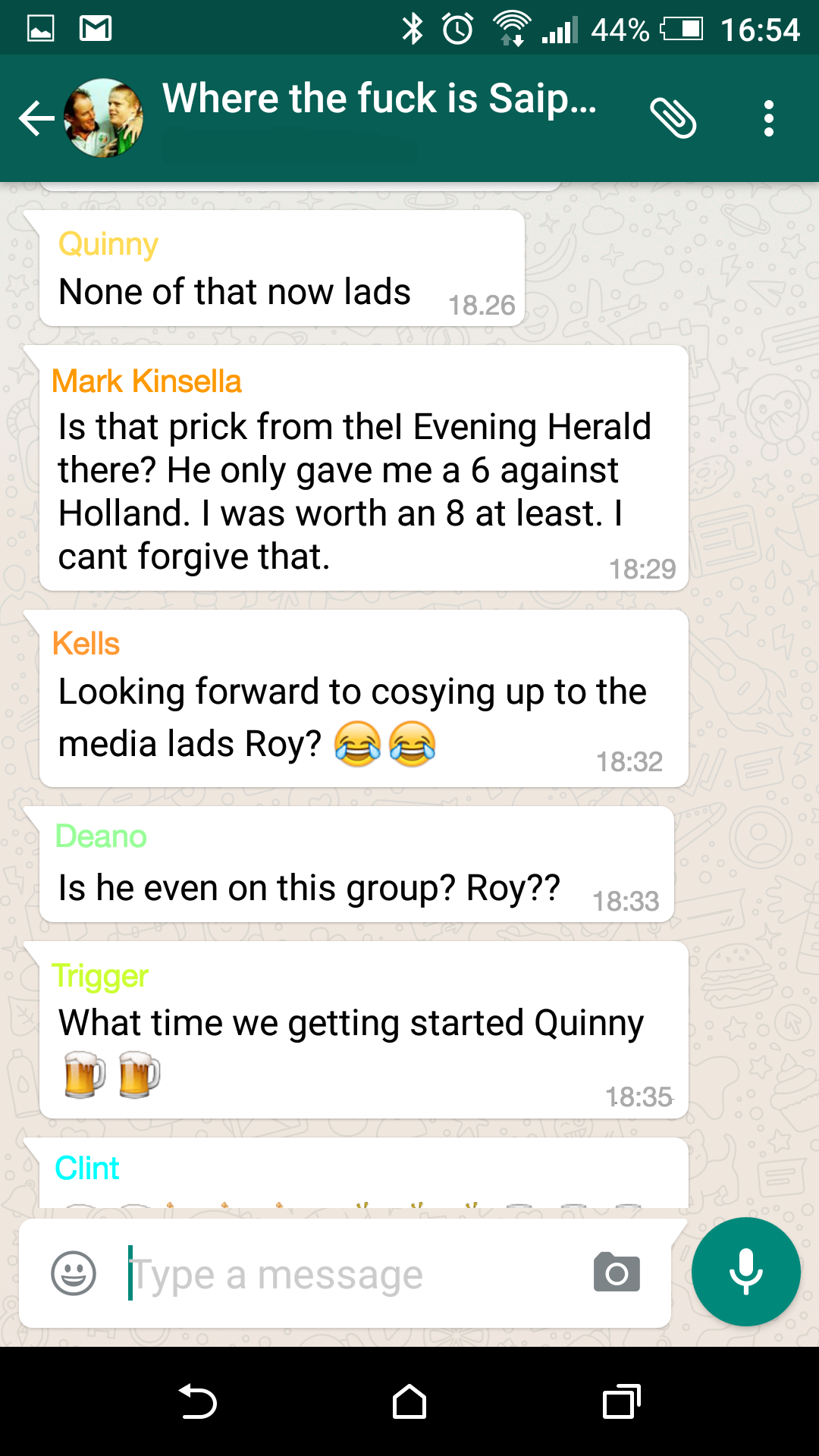 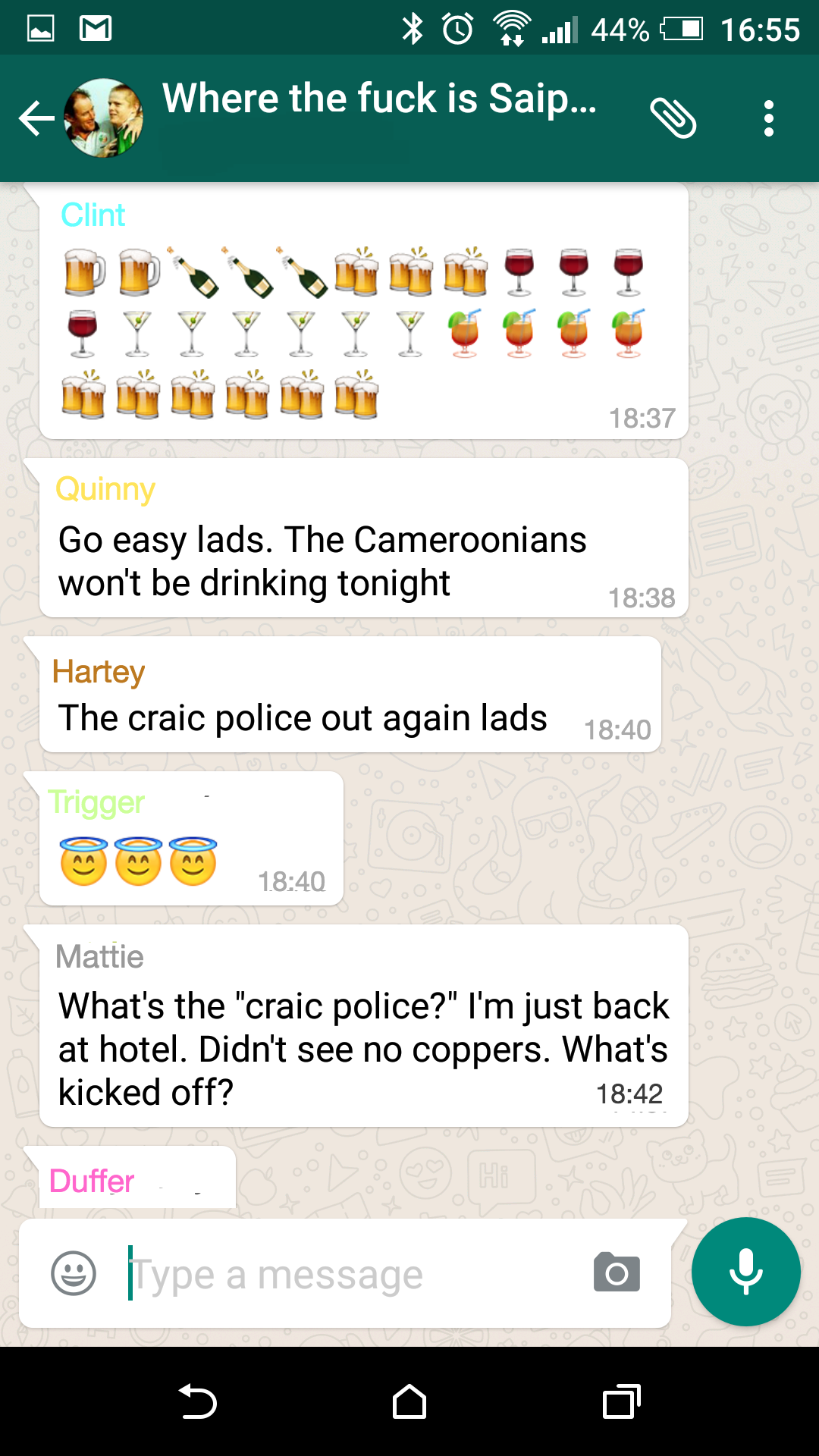 The morning after the night before. After the long night in the Beefeater, the lads get some badly needed rest. 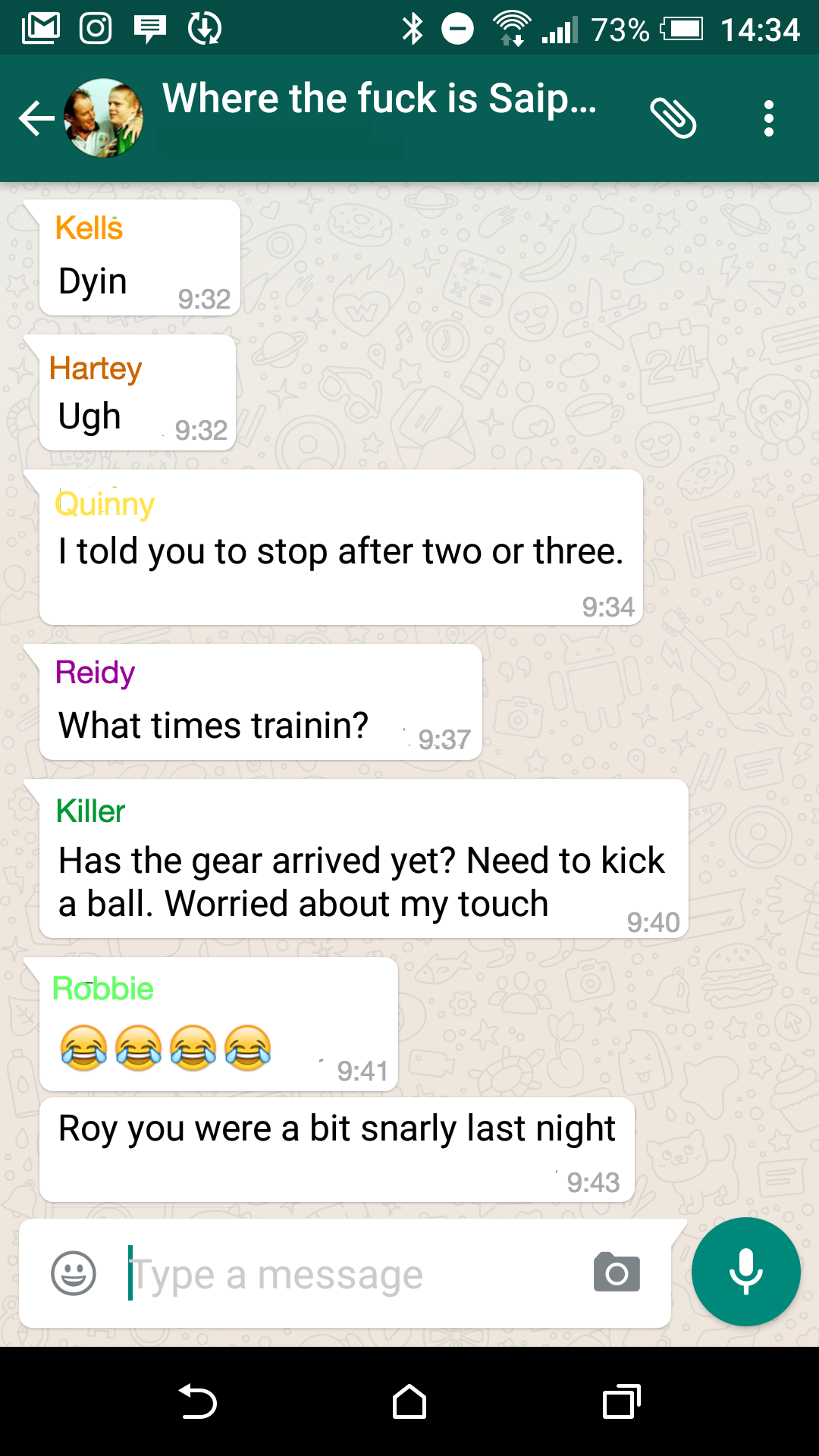 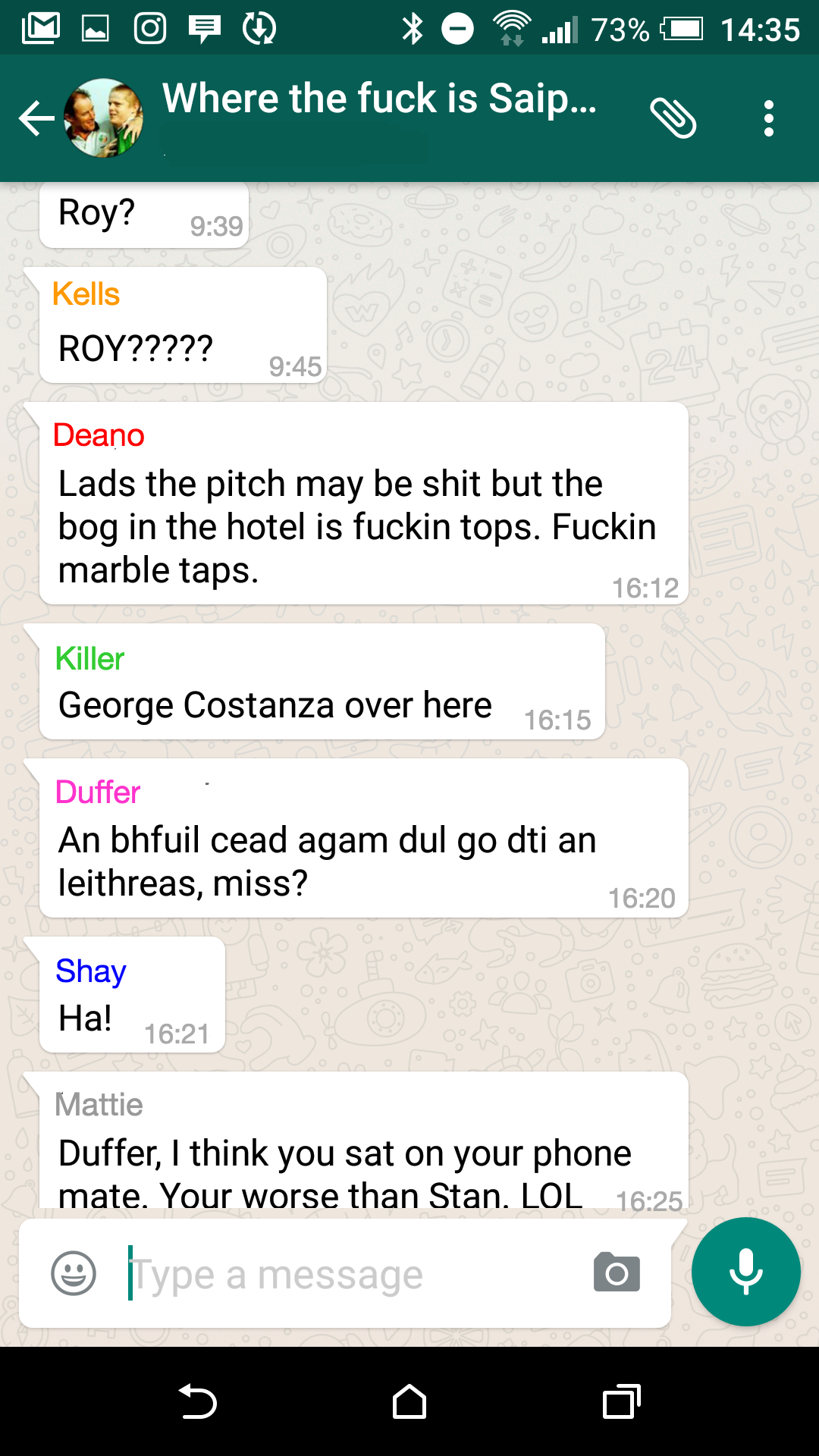 A training day. At the end of the session, Roy Keane takes umbrage at the absence of goalkeepers for their match. He lets Alan Kelly know what he thinks of the situation. Later on, he has an important conversation with Mick McCarthy. 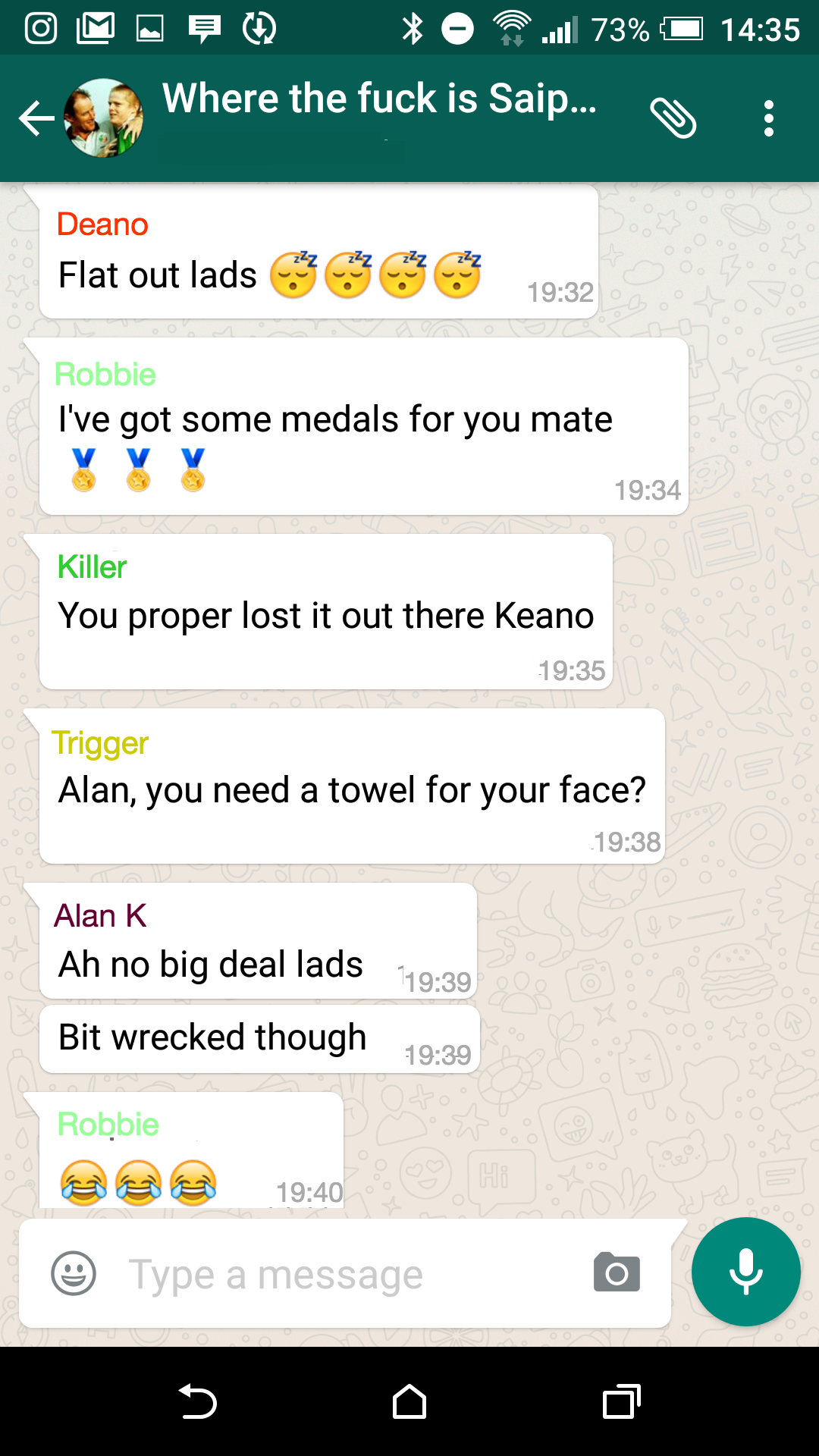 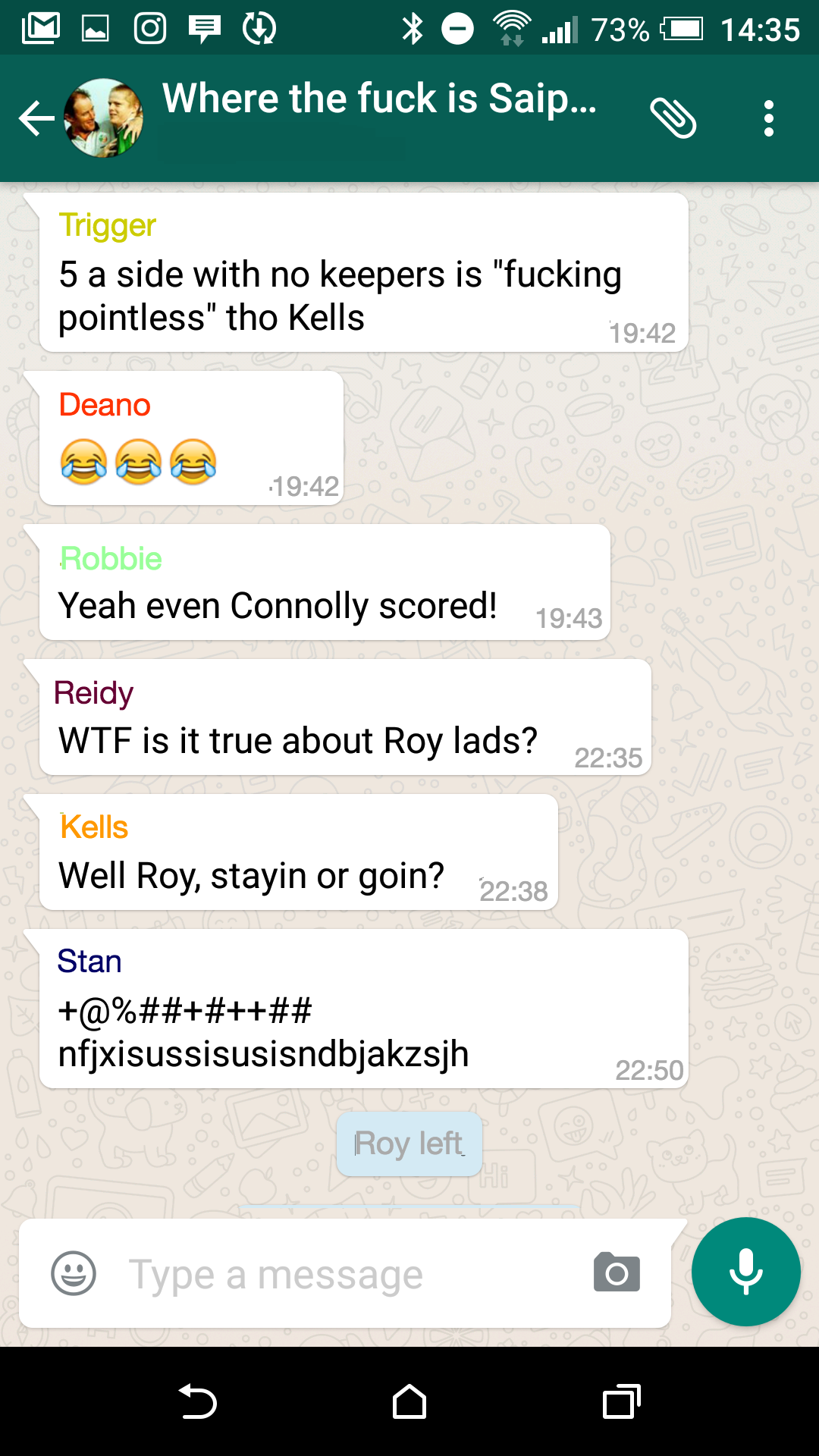 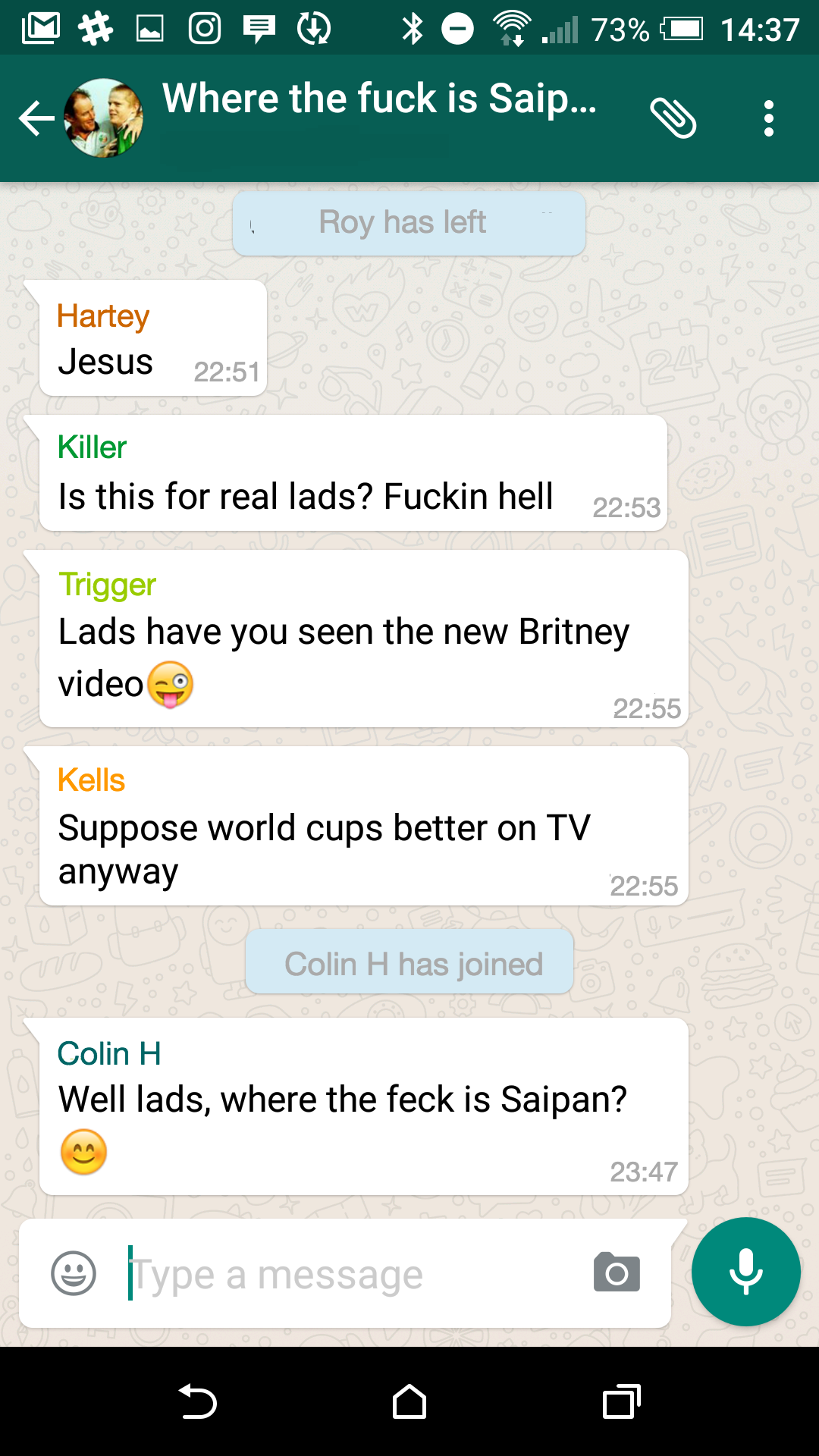 Colin Healy is called up to the squad but is shortly afterwards asked to stand down. A crisis is averted. 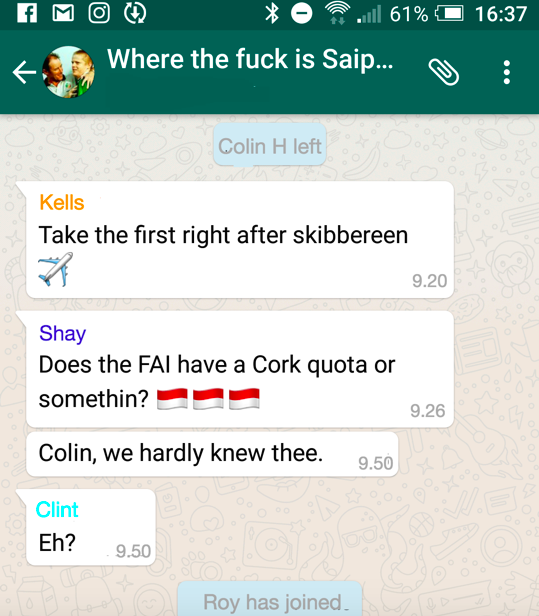 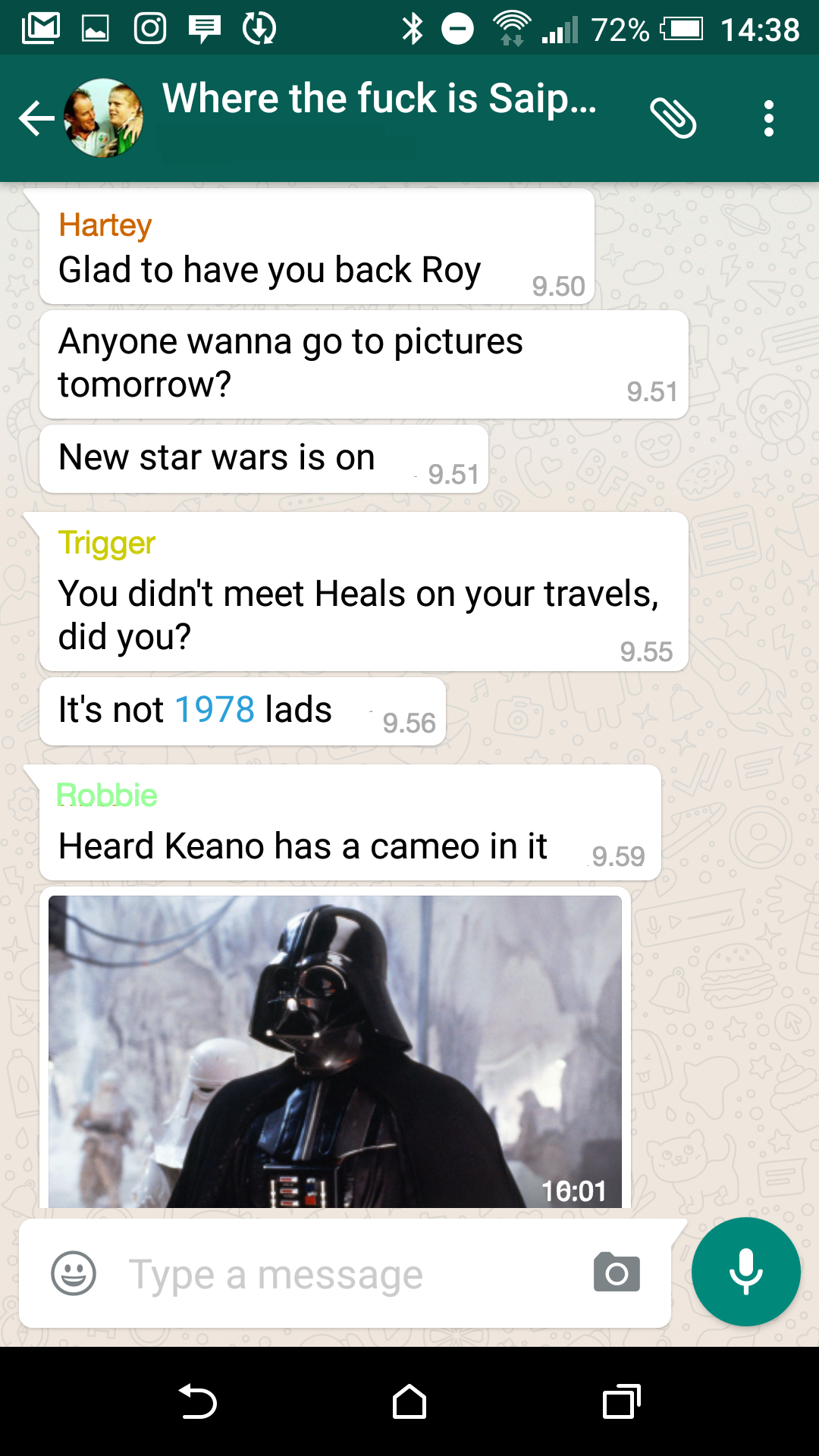 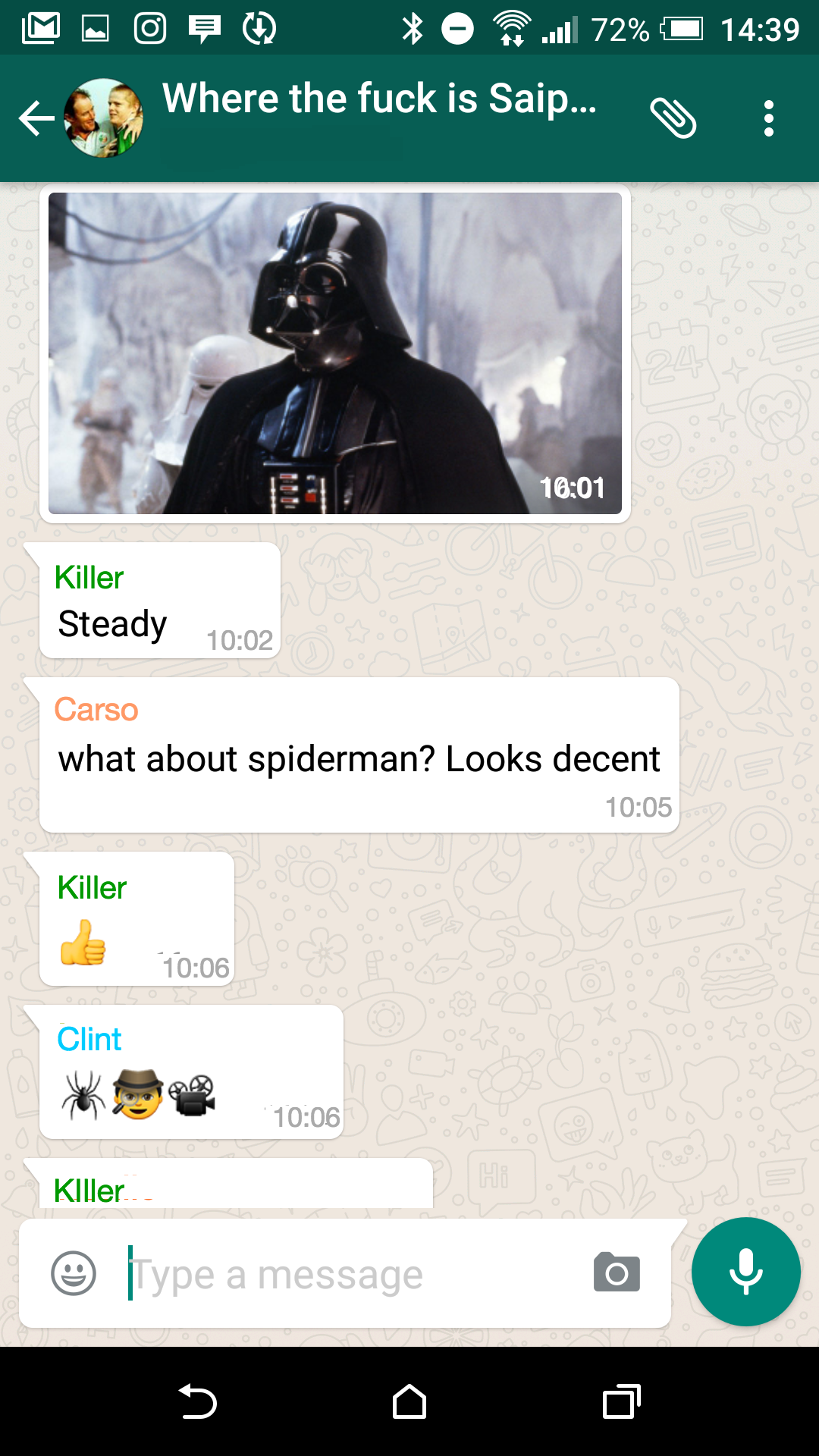 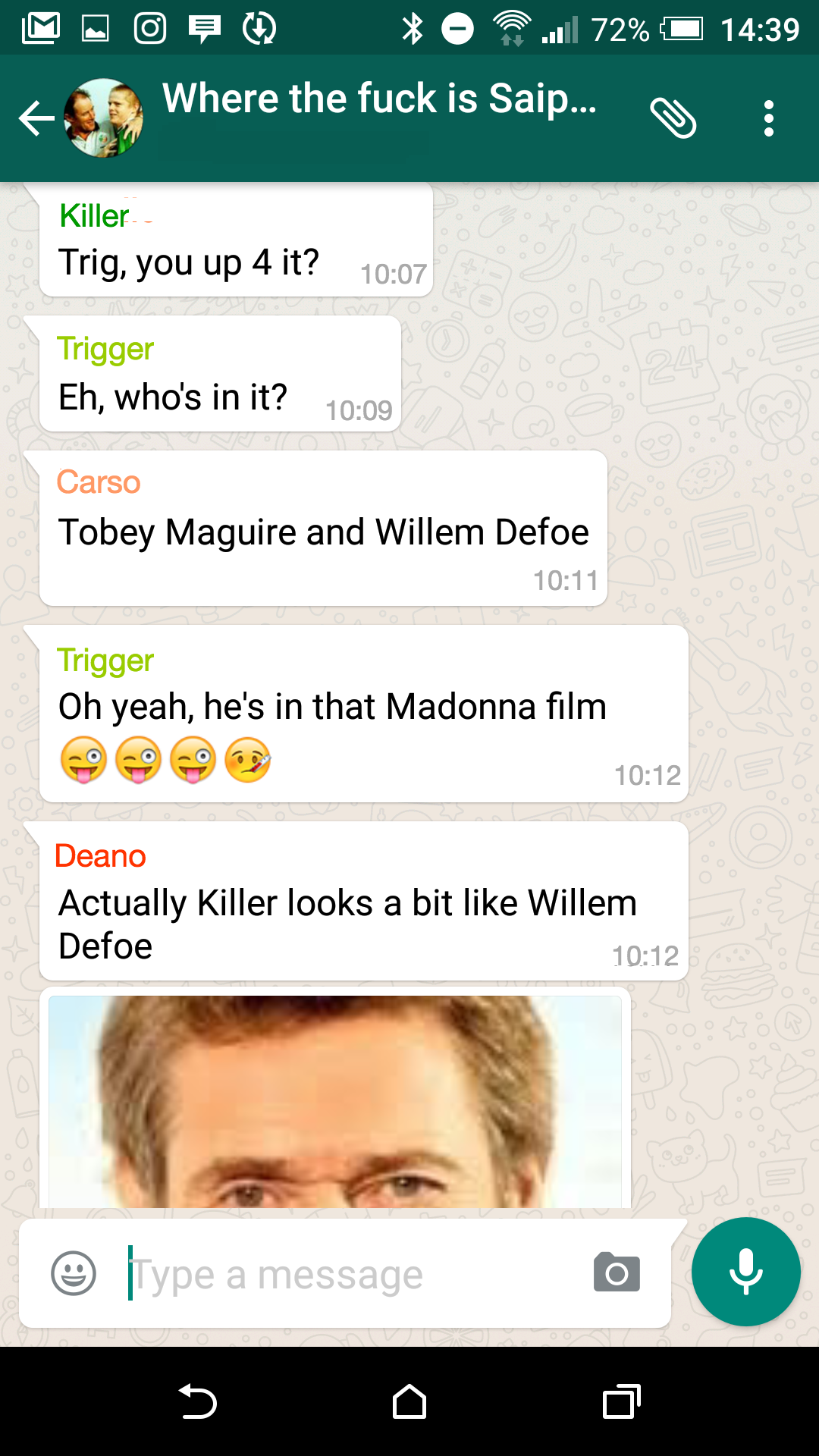 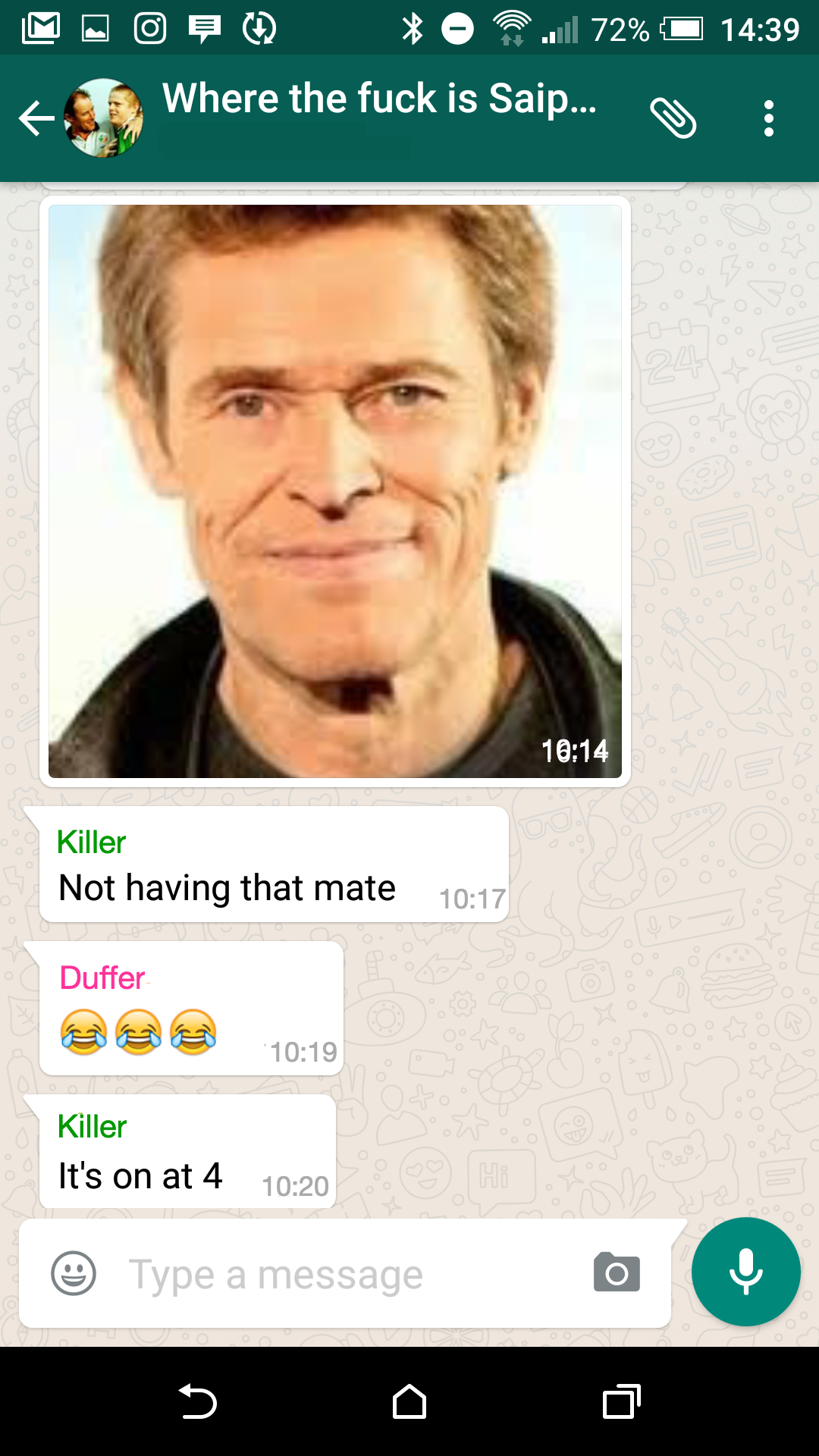 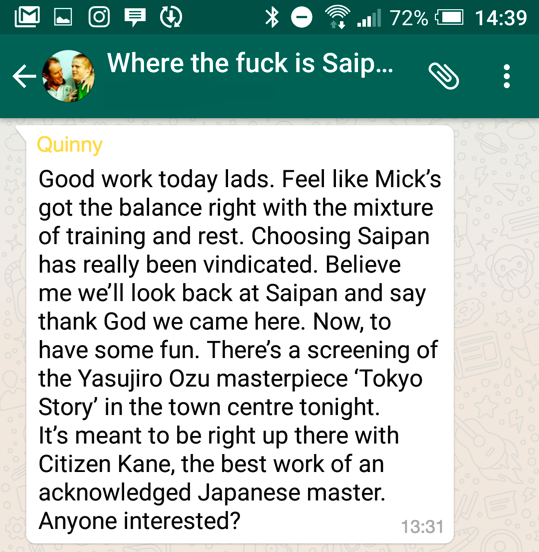 The Irish Times publishes an interview with Roy Keane in which he criticises the team's preparations. They hold a team meeting at 7pm over the interview. Roy Keane leaves the squad shortly afterwards. 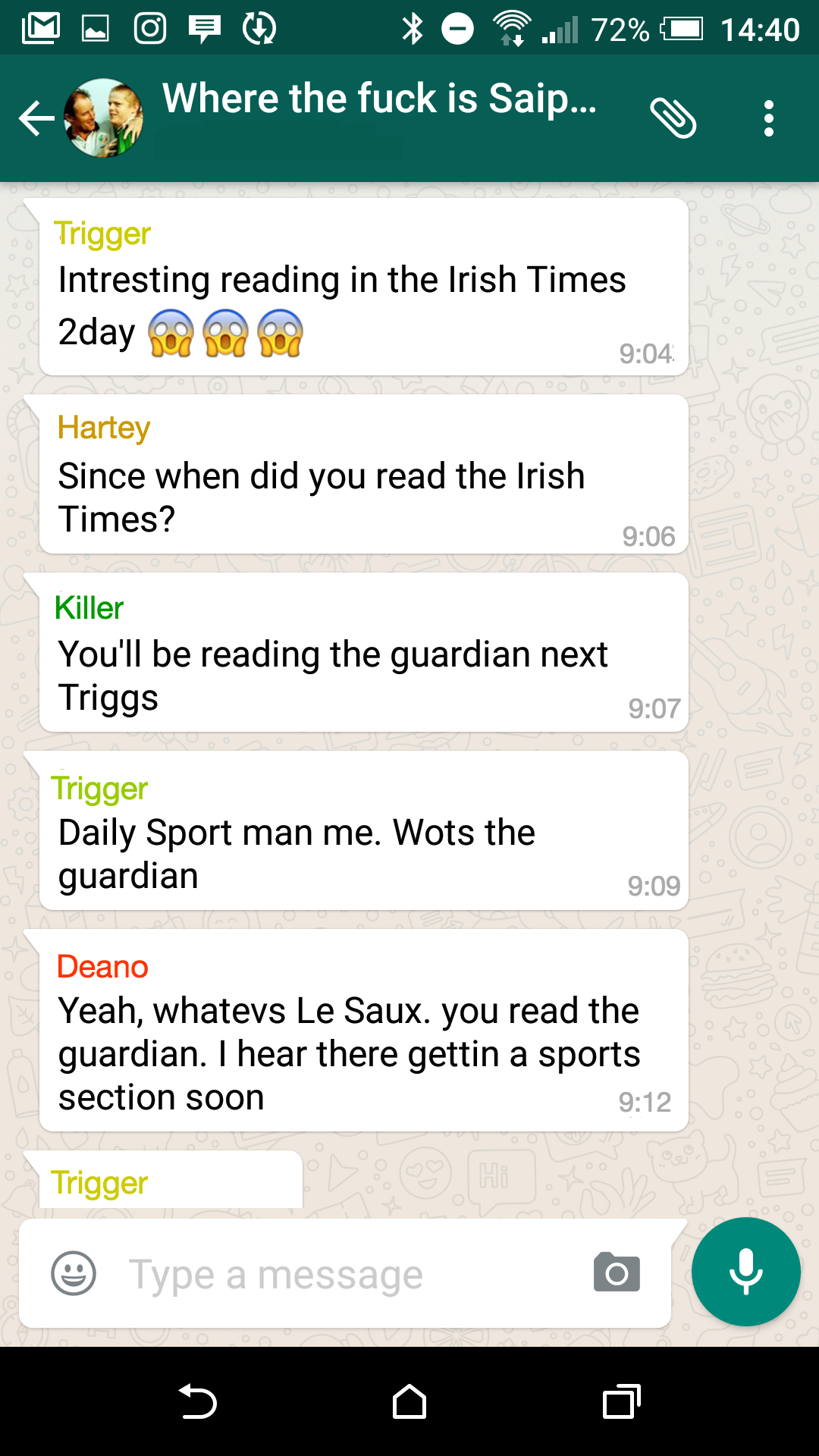 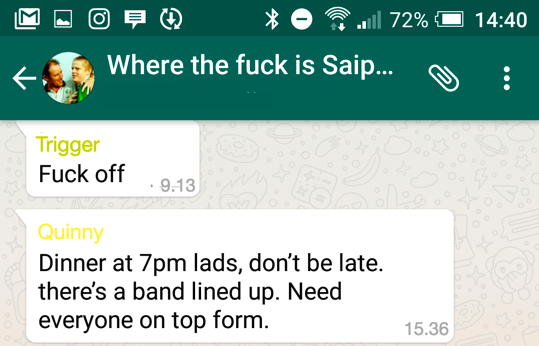 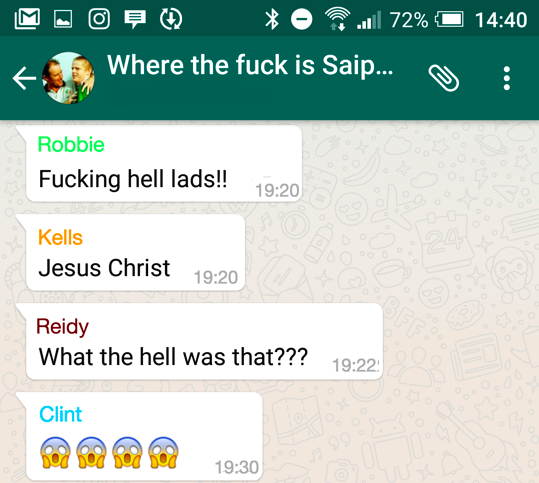 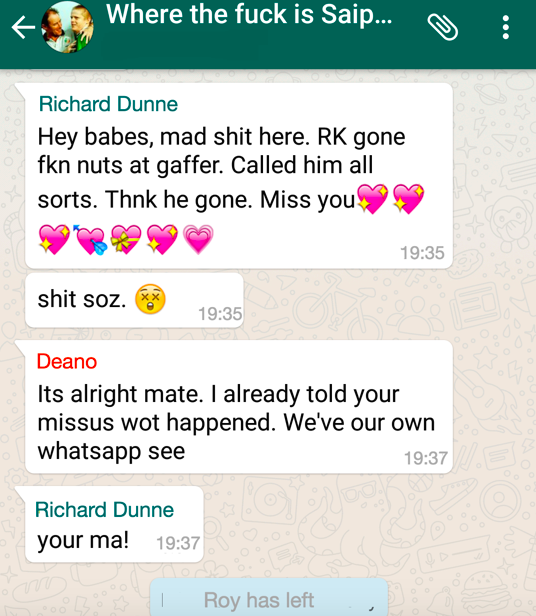 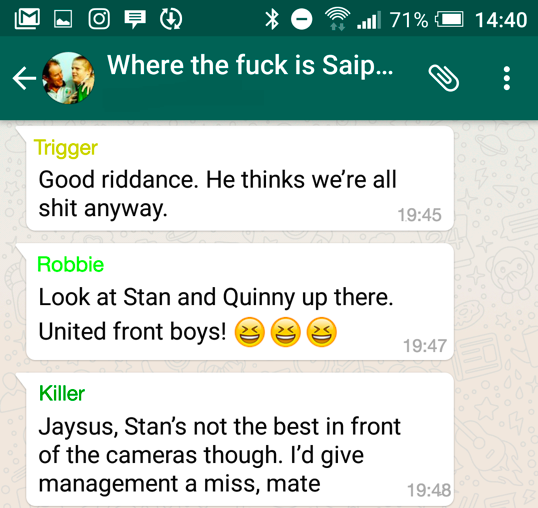 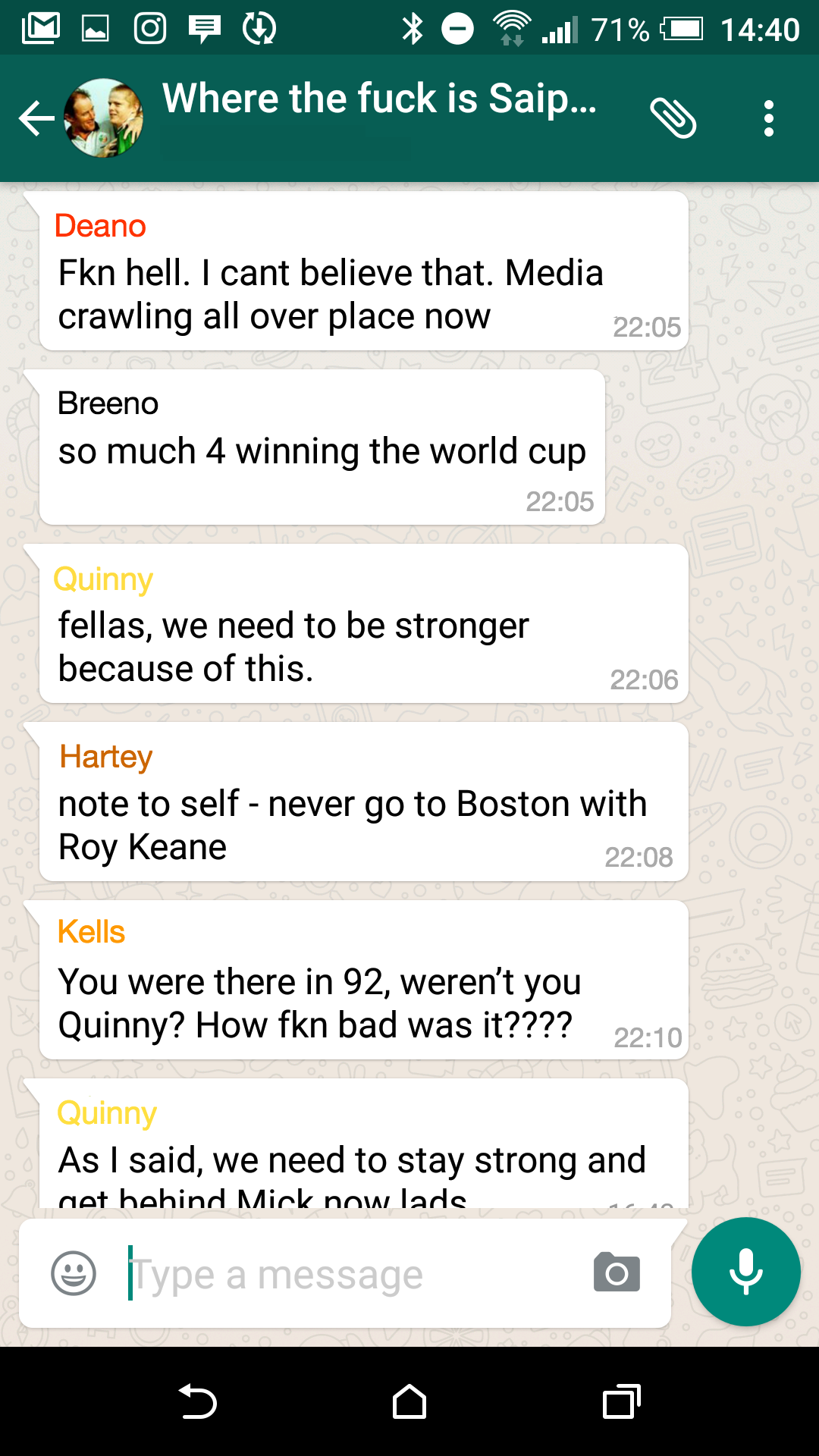 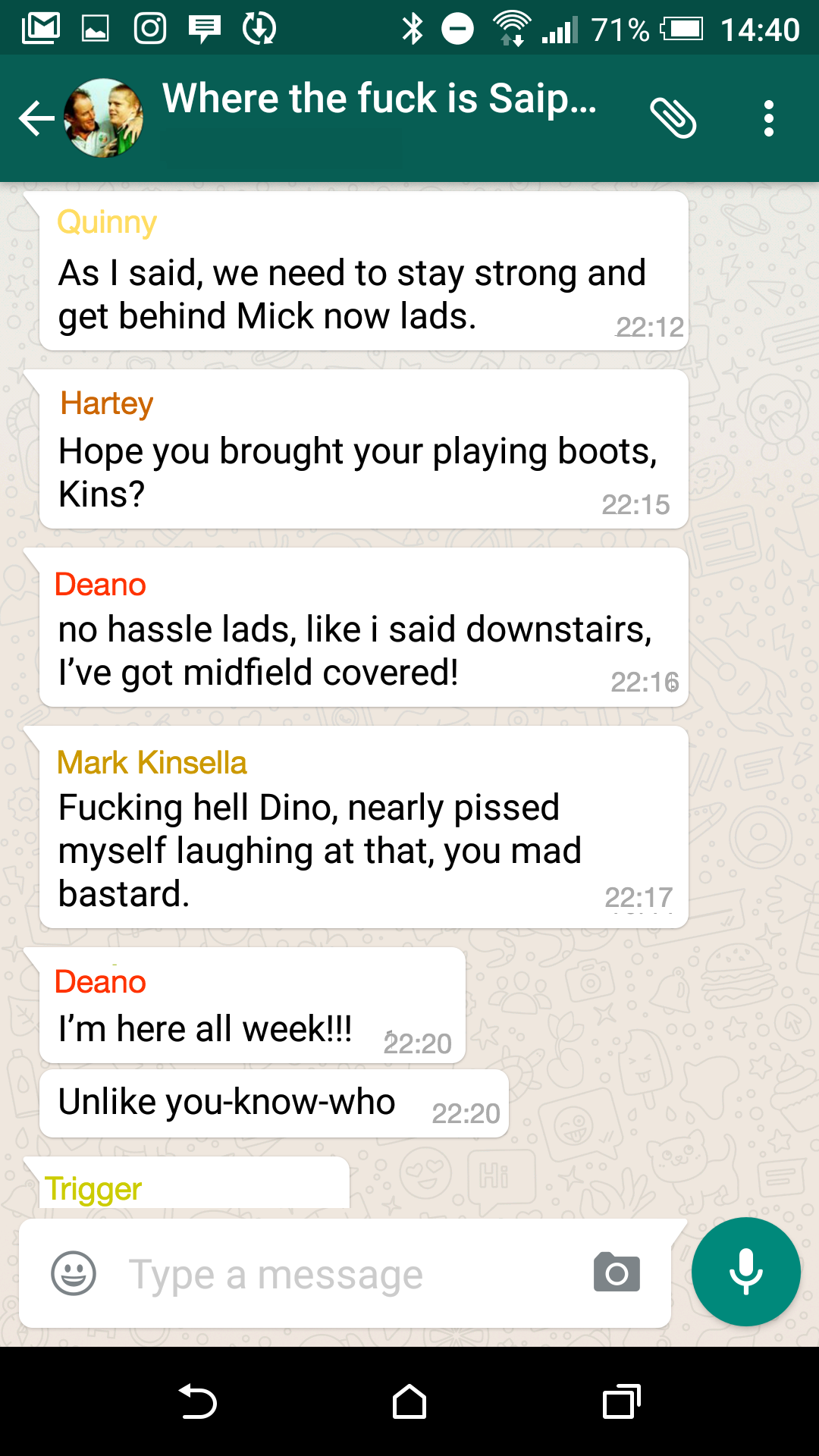 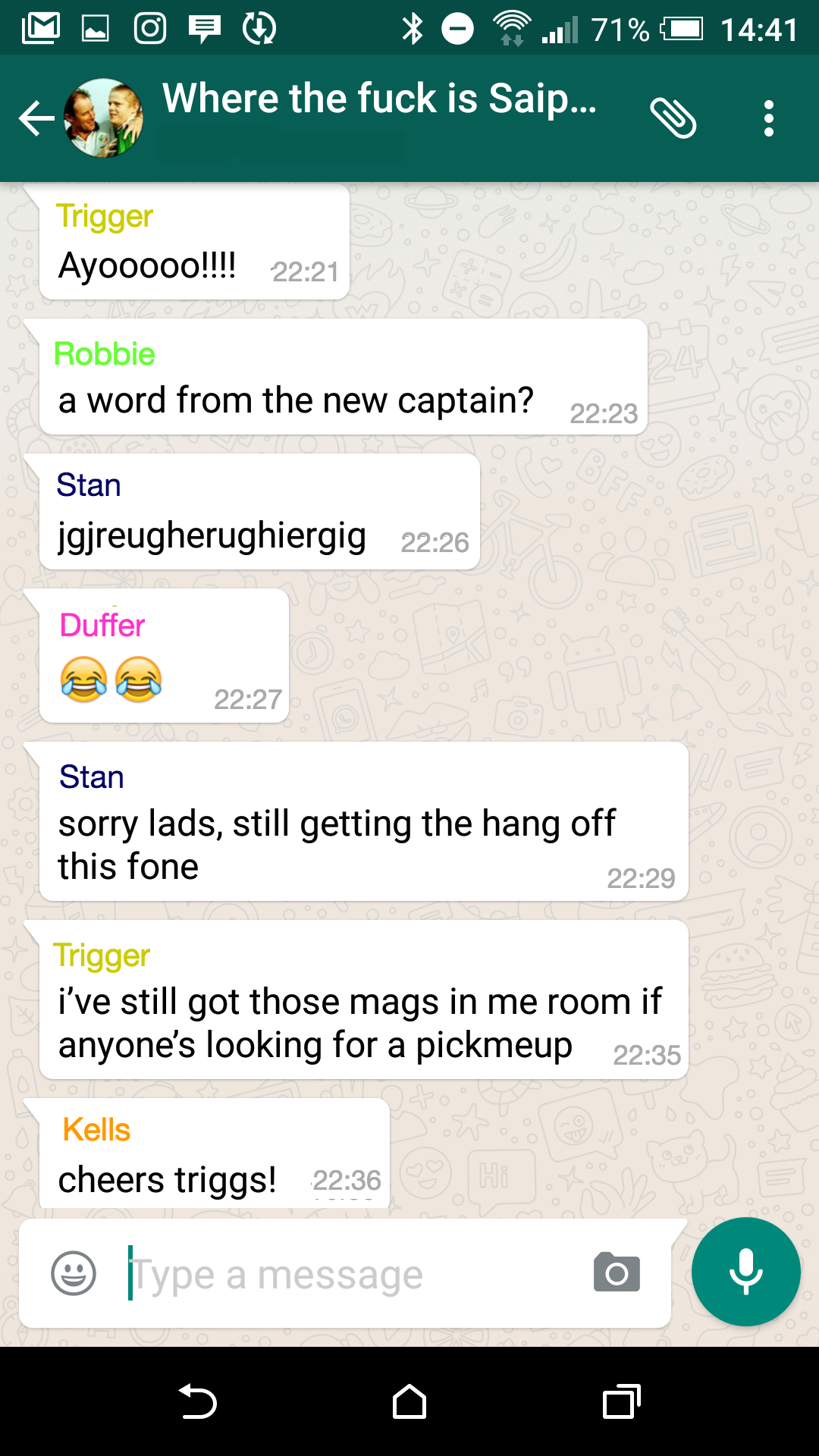 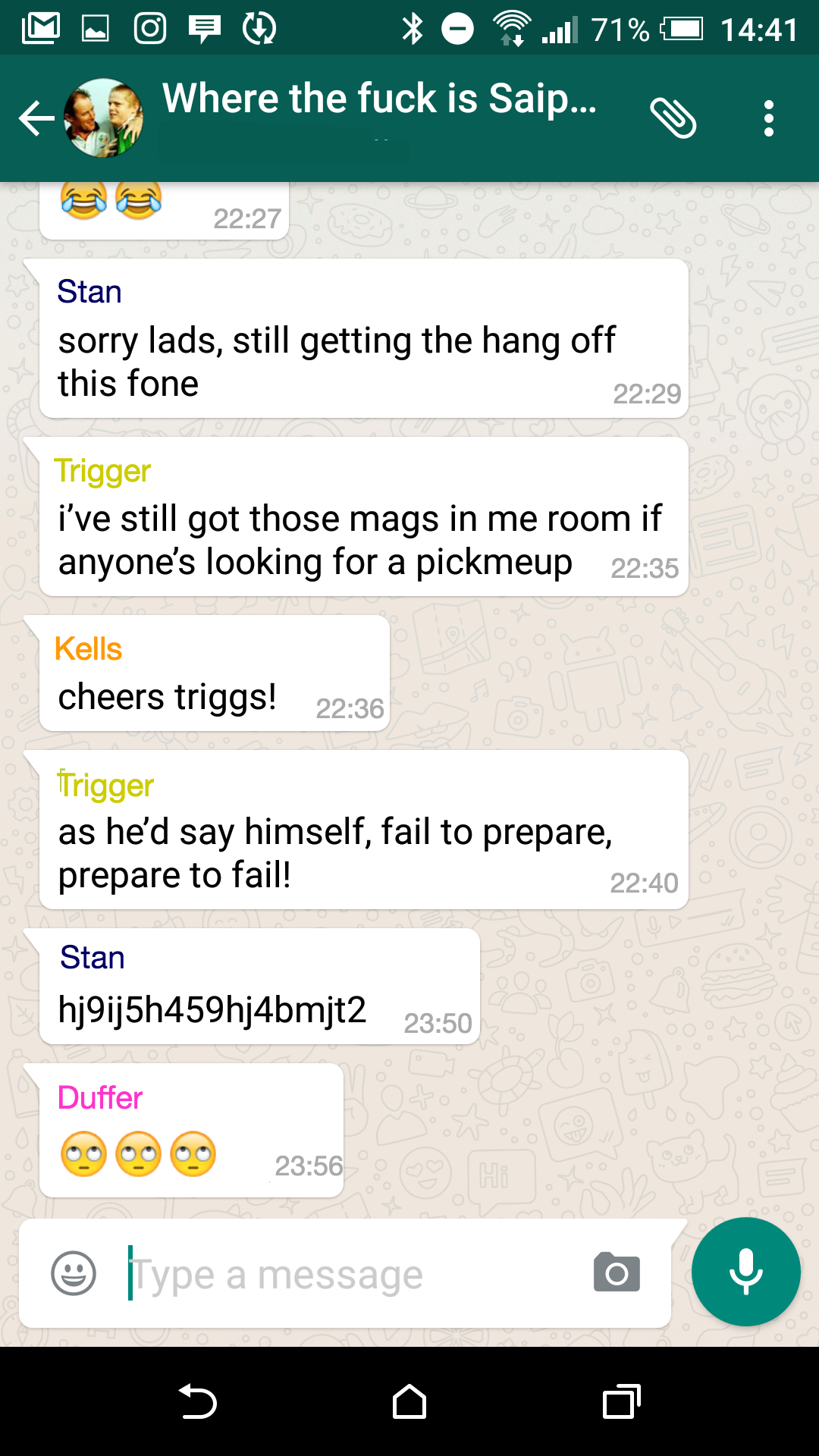 SEE ALSO: The Influence Of The Irish: International Football Clubs Who Owe Their Heritage To Ireland

Football
1 week ago
By Balls Team
Where Are They Now? - The Ireland Fans At The Walkinstown Roundabout In 1990
1

Football
1 week ago
By Gary Reilly
Watch: Robbie Brady's Post-Match Interview Is The Most Beautiful Thing We've Ever Seen
3

Football
1 week ago
By Balls Team
Where Are They Now? - The Ireland Fans At The Walkinstown Roundabout In 1990
Football
1 week ago
By Gary Reilly
Watch: Robbie Brady's Post-Match Interview Is The Most Beautiful Thing We've Ever Seen
Football
3 weeks ago
By Maurice Brosnan
Balls Remembers - The French Meltdown At World Cup 2010
Popular on Balls
American Sports
17 hours ago
By Gary Connaughton
Sheamus Reveals He Once Had Backstage Fight With WWE Star Over Rent Money
5

The Rewind
15 hours ago
By Gary Connaughton
Quiz: Can You Defeat The Beast In This Final Round Of 'The Chase'?
5