There's been a lot of doom and gloom around these parts recently. Ireland's inability to bring through young talent has been highlighted by all this Jack Grealish business and rightly so. Our u21 setup is not exactly glowing with Premier League talent.

The likes of Jack Byrne and Josh Cullen may be our best hopes in that age group but in terms of strength in depth, it doesn't look overly positive. However, that's not to say that it's a lost cause. If we're to look further down the age groups then maybe there is the shoots of revival in terms of Irish development that we've been promised.

In the past few weeks, the Irish u17 side have topped their group for the initial qualifying stage of the Euro u17 Championships in 2016. There's some talented individuals in that group and that has been acknowledged with the Guardian's list of '20 of the best talents at Premier League clubs'.

The list features one payer from each of the twenty Premier League clubs born between 1 September 1998 and 31 August 1999. Yes that does seem disgustingly young but we're not getting any younger so on a personal level we're all just going to have to deal with that.

Anyway, out of twenty players, three from the same Irish u17 bracket is very encouraging. From Aston Villa, there's central defender James Finnerty. The Meath native moved to Birmingham during the summer and it seems he's making a bit of a name for himself already.

Finnerty's featuring in this list has also given the Guardian due opportunity to mention Skryne GAA for what we can only assume is the first time. Not even Trevor Giles got this kind of coverage.

Finnerty, who also played Gaelic football for Skryne, made an impressive first start for Villa’s Under-18s against Norwich early in September and has featured regularly since then. This season he has also become a fixture in a Republic of Ireland Under-17 side who began their Uefa Under-17 Championship qualifying campaign promisingly with two clean sheets.

We don't want to put any undue pressure on Finnerty but we have early money on him becoming Meath's first ever Irish international. Here's the list if you don't believe us.

Alongside Finnerty in the list is Crystal Palace hotshot Kian Flanagan. Unlike Finnerty, there could be another international tug of war in his case. At the moment he's part of the Irish setup but there's talk that England are monitoring his progress and it's no wonder when you consider that Man United, Chelsea and Arsenal were all supposedly looking to take him off Palace's hands this summer.

The London club managed to keep hold of him and, at only 16, he's being tipped for a big future.

Flanagan is creative and incisive with the ball, talents which alerted Manchester United, West Ham, Chelsea and Arsenal over the summer, when Palace feared they might lose the 16-year-old, who remained on a scholarship contract, for around £50,000. However, it now seems likely he will remain at the south London club for the foreseeable future and feature regularly for the Under-18s this term.

Finally, we also have Arsenal's Marcus Agyei-Tabi, who we've recently seen training with the first team. 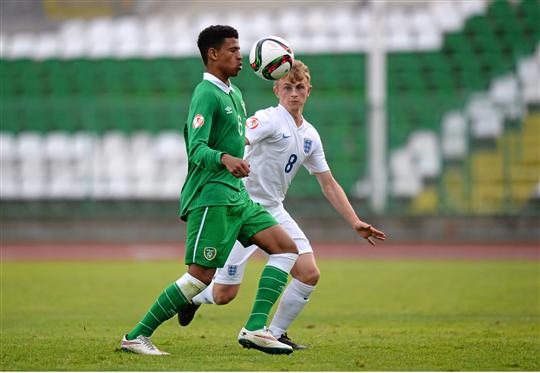 Agyei-Tabi was part of the squad for this summer's u17 European Championships and although Ireland didn't progress past the group stage, it was certainly a good place for Agyei-Tabi to get his first taste of international football.

Agyei-Tabi is mature beyond his years. Tactically aware and always keen to get on the ball and take responsibility, he has quick feet and penetration to his passing

So there you go. It may be a subjective list and players that are going to make it through to senior football are very difficult to pick out at that age but nonetheless we'll take it as a positive amid all the doom and gloom.